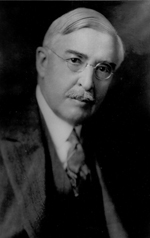 William Morgan Butler (, &ndash;, ) was a lawyer and legislator for the State of , and a United States Senator.

Butler moved to Boston in 1895, and continued the practice of law until 1912, when he engaged in the manufacture of goods. He was a member of the commission to revise the statutes of Massachusetts from 1896 to 1900, and was chairman of the in 1924.

Butler served as chairman of the in the , and then resumed his manufacturing interests. He thereafter resided in Boston until his death, and was interred in .