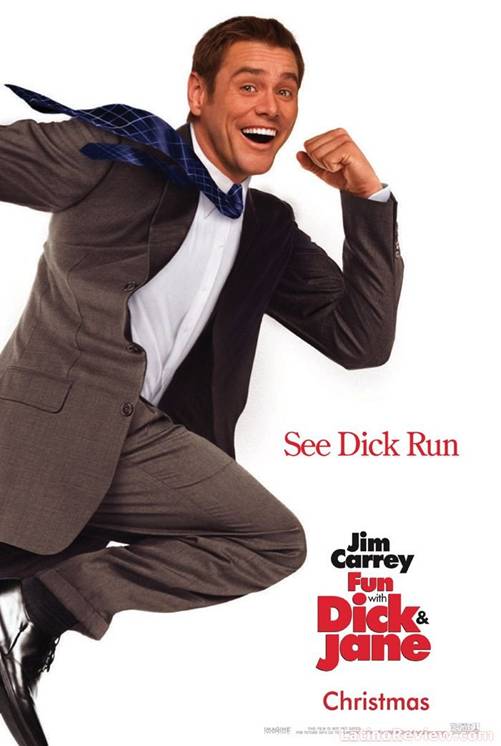 Fun with Dick and Jane is a 2005 , and of the 1977 film of the same name. The story revolves around an upper-middle class couple, Dick and Jane Harper, who turn to robbery after Dick's company goes bankrupt and they run out of money. It stars and in the title roles.

The year is , and we are introduced to the Harper family. The family members are Dick Harper, who works for a company in called Globodyne. Jane Harper works at a local travel agency and is often stressed at work. They have a son named Billy, who speaks mostly Spanish, as he is good friends with the family's young Hispanic housekeeper, Blanca. They also have a dog, who liked to bark until he was fitted with a shock collar. Dick is 'promoted' to Vice-President of Communications by company Jack McCallister and company Frank Bascombe. He is also asked to appear on the show "Money Life", where host Sam Samuels and then independent presidential candidate dub him and all the company's employees as "perverters of the American dream" and claim that Globodyne helps the super rich get even wealthier. The company's stock is soon worthless, along with all the employees' pensions, which are in Globodyne's stock.

Dick arrives home to find an excited Jane, who informs him that she took his advice and quit her job in order to spend more time with Billy. Dick has to break the news over dinner, instantly alarming Jane. Dick tries to think positively, and tries for a few months to get a Vice Presidency at other corporations. After getting no job anywhere, Jane reveals that they'll end up declaring bankruptcy in couple of months due to having everything in Globodyne stock.

Dick still tries to look on the bright side; stating that their house is worth $600,000. Jane then informs him that, since the fall of Globodyne, the local property market crashed, and that if they were to sell their house, they would owe the bank $150,000. After coming to terms with the prospect of being poor, Dick applies for low paying, dead-end jobs. After being fired from all local businesses, (with Dick being mistakenly deported to the because of his slurring from getting punched in the mouth by an "" trying to catch a painting job) and finding out that they have 24 hours before being evicted from their home, he decides that it's time for the couple to turn to crime. Dick borrows Billy's surprisingly realistic squirt gun and decides to rob a local convenience store. He emerges and orders Jane to burn rubber, as he stole a slushy, much to Jane's amusement. After several failed attempts, they finally rob a head shop. Realizing that they get a thrill out of stealing, they make a profession out of this, going on nightly robbing sprees. They climb their way up the crime ladder, becoming more professional with each passing night. Their last "job" is to rob a local bank by going undercover. The plan goes as planned, until another crime spree couple enters the bank, wearing Clinton masks and armed with shotguns. They are revealed to be former employees of Globodyne; Dick's jealous co-worker Oz and his wife Debbie. Dick and Jane escape, unscratched and unharmed. They decide to stop their "profession" but it's revealed that Dick is about to be indicted for his role in Globodyne's demise (as most of the other employees of Globodyne has also reverted to criminal lifestyles as they have have), thus he starts drowning his sorrows at the local bar. While there, he and Jane encounter a drunk Frank Bascombe, who tells them that the crooked Jack McCallister signed off all of Globodyne's assets (totaling $400 Million), dumped the entire stock, and that he paid Bascombe $10,000,000 to keep his mouth shut (as it was McCallister's plan from the beginning because he felt burnt-out).

After Frank sobers up, they make a team and, through a devious and well put together plan, dupe Jack McCallister into reimbursing all of his former employees' pensions.

Although McCallister catches them in the act, Dick is able to still reimburse all of the former employees because he got McCallister's signature. Thus his wife, an art major, was able to forge his signature. The next day, Dick informs McCallister of the act as the press flock to him. The film ends with the wealthy Harper family driving along the highway and into the sunset, as another car drives up to them. In the car is another former Globodyne employee who tells Dick he's got a great new job at a company called .

After a disappointing opening weekend of $14,383,515, the film managed to have exceptionally good staying power throughout the holiday season, making nearly eight times its opening weekend gross, eventually earning $110,332,737 at the domestic box office, and $91,693,375 in international reciepts, for a total of $202,026,112 worldwide. With a budget of $100 million, the film was a moderate success but was considered a disappointment by many when compared to other Carrey films Fact|date=August 2007. As of , "Fun with Dick and Jane " has generated $43.5 million from rental gross.The film received a 29% fresh rating at RottenTomatoes.com.

* The financial transaction form used in the film's final scenes is identified as a CRM-114, which is a number used in some of 's films.
* Dick's company Globodyne, and the way it falls, is a direct parody of various corporations early in the 21st century like , , and . The closing credits begin with a Special Thanks To list, naming executives at , , , , , , and .
* When Dick pulls into the parking lot for Globodyne, everybody but him drives a new BMW 7 series. Dick himself has a BMW 3 series from the late 1980s. He later leases a BMW 7 Series, which gets traded for a and he has a at the end.
* The an neighborhood in the film consisted of the construction of 12 homes (only a front facade), and one fully-functioning home all built on the site of the abandoned theme park in California.
* While filming the coffee shop robbery scene, seriously injured her shoulder while sliding on the counter.
* Throughout the film, which is set in the year , there are numerous references made to the presidential campaign that year between , and , including Dick being interviewed by Nader, a TV screen showing a Bush campaign speech clearly from 2000, and signs across city streets, stores, and on cars reading "Gore/Lieberman" or "Bush/Cheney".
* Among the disguises Dick and Jane use include Bill and , , and (it is worth to notice, in the latter case, that Jane comes in first as Sonny and then is joined by Dick as Cher).
* gave more than $100,000 to pause filming for a week, so that Carrey could promote his previous movie, "".
* Reese Witherspoon can briefly be seen walking by in the super-market scene as Dick greets customers.
* was originally cast for the role of Jane, but had to drop out due to filming commitments with "".
* One of the songs heard in this movie is an exact song from "", and is even named something that is a direct reference to the movie in the closing credits.