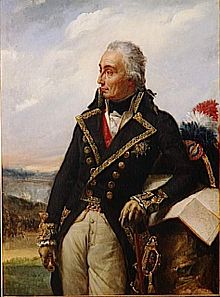 Nikolaus, Count Luckner (12 January 1722 – 4 January 1794, Paris) was a German in French service who rose to become a Marshal of France. (His name is spelled Nicolas in French, Nikolaus in German).

Luckner grew up in Cham, in eastern Bavaria and received his early education from the Jesuits in Passau. Before entering the French service, Luckner had spent time in the Bavarian, Dutch and Hanoverian armies. He fought as a commander of hussars during the Seven Years' War against the French. Luckner joined the French army in 1763 with the rank of lieutenant general. In 1784 he was made a Danish count.

He supported the French Revolution, and the year 1791 saw Luckner being made a Marshal of France. In 1792, Luckner first served as commander of the Army of the Rhine, during which time Rouget de Lisle dedicated to him the Chant de Guerre pour l'Armée du Rhin (War Song of the Army of the Rhine), which was to become better known as the Marseillaise.

As commander of the Army of the North he captured the Flemish cities of Menen and Kortrijk, but then had to retreat towards Lille. After the flight of Lafayette he was made generalissimo with orders to build a Reserve Army near Châlons-sur-Marne. However, the National Convention was not satisfied with his progress and Choderlos de Laclos was ordered to support or replace him. Luckner, now over 70 years of age, then asked for dismissal and went to Paris.

He was arrested by the Revolutionary Tribunal and sentenced to death. He died by the guillotine in Paris in 1794.

The carillon of the town hall in the Bavarian town of Cham rings the Marseillaise every day at 12.05 p.m. to commemorate the city's most famous son, Nikolaus Graf von Luckner.

He was the great grandfather of Count Felix von Luckner, a German World War I naval officer who commanded the famed merchant raider SMS Seeadler.

He was owner of Krummbek Manor.