GERD is usually caused by changes in the barrier between the stomach and the esophagus, including abnormal relaxation of the lower esophageal sphincter, which normally holds the top of the stomach closed; impaired expulsion of gastric reflux from the esophagus, or a hiatal hernia. These changes may be permanent or temporary ("transient").

Another kind of acid reflux, which causes respiratory and laryngeal signs and symptoms, is called laryngopharyngeal reflux (LPR) or "extraesophageal reflux disease" (EERD). Unlike GERD, LPR is unlikely to produce heartburn, and is sometimes called silent reflux.

The most-common symptoms of GERD are:

GERD sometimes causes injury of the esophagus. These injuries may include:

Several other atypical symptoms are associated with GERD, but there is good evidence for causation only when they are accompanied by esophageal injury. These symptoms are:

Some people have proposed that symptoms such as sinusitis, recurrent ear infections, and idiopathic pulmonary fibrosis are due to GERD; however, a causative role has not been established.[2]

GERD may be difficult to detect in infants and children, since they cannot describe what they are feeling and indicators must be observed. Symptoms may vary from typical adult symptoms. GERD in children may cause repeated vomiting, effortless spitting up, coughing, and other respiratory problems such as wheezing. Inconsolable crying, refusing food, crying for food and then pulling off the bottle or breast only to cry for it again, failure to gain adequate weight, bad breath, and belching or burping are also common. Children may have one symptom or many; no single symptom is universal in all children with GERD.

It is estimated that of the approximately 4 million babies born in the U.S. each year, up to 35% of them may have difficulties with reflux in the first few months of their life, known as spitting up.[5] One theory for this is the "4th trimester theory" which notes that most animals are born with significant mobility, but humans are relatively helpless at birth, and suggests that there may have once been a fourth trimester, but that children began to be born earlier, evolutionarily, to accommodate the development of larger heads and brains and allow them to pass through the birth canal [6] and this leaves them with partially undeveloped digestive systems.

Most children will outgrow their reflux by their first birthday. However, a small but significant number of them will not outgrow the condition. This is particularly true where there is a family history of GERD present.

GERD may lead to Barrett's esophagus, a type of intestinal metaplasia,[3] which is in turn a precursor condition for carcinoma. The risk of progression from Barrett's to dysplasia is uncertain but is estimated at about 20% of cases.[7] Due to the risk of chronic heartburn progressing to Barrett's, EGD every five years is recommended for patients with chronic heartburn, or who take drugs for chronic GERD.[citation needed] 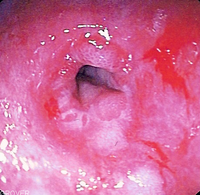 Endoscopic image of peptic stricture, or narrowing of the esophagus near the junction with the stomach. This is a complication of chronic gastroesophageal reflux disease and can be a cause of dysphagia or difficulty swallowing. 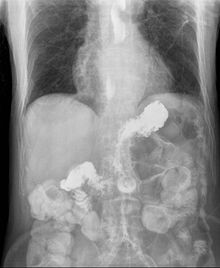 X-ray of the abdomen and chest in a patient with a gastrostomy. Radiocontrast was injected into the stomach and quickly seen migrating upwards through the entire esophagus. The patient had severe reflux esophagitis (Los Angeles grade D).

The current gold standard for diagnosis of GERD is esophageal pH monitoring. It is the most objective test to diagnose the reflux disease and it also allows to monitor GERD patients in regards of their response to medical or surgical treatment. One practice for diagnosis of GERD is a short-term treatment with proton pump inhibitors, with improvement in symptoms suggesting a positive diagnosis. According to a systematic review, short-term treatment with proton pump inhibitors may help predict abnormal 24-hr pH monitoring results among patients with symptoms suggestive of GERD.[8] In this study, the positive likelihood ratio of a symptomatic response detecting GERD ranged from 1.63 to 1.87, with sensitivity of 0.78 though specificity was only 0.54.

In general, an EGD is done when the patient either does not respond well to treatment or has alarm symptoms including dysphagia, anemia, blood in the stool (detected chemically), wheezing, weight loss, or voice changes. Some physicians advocate either once-in-a-lifetime or 5/10-yearly endoscopy for patients with longstanding GERD, to evaluate the possible presence of dysplasia or Barrett's esophagus, a precursor lesion for esophageal adenocarcinoma.[9]

Esophagogastroduodenoscopy (EGD) (a form of endoscopy) involves insertion of a thin scope through the mouth and throat into the esophagus and stomach (often while the patient is sedated) in order to assess the internal surfaces of the esophagus, stomach, and duodenum.

Biopsies can be performed during gastroscopy and these may show:

Reflux changes may be non-erosive in nature, leading to the entity "non-erosive reflux disease".

GERD is caused by a failure of the cardia. In healthy patients, the "Angle of His"—the angle at which the esophagus enters the stomach—creates a valve that prevents duodenal bile, enzymes, and stomach acid from traveling back into the esophagus where they can cause burning and inflammation of sensitive esophageal tissue.

Factors that can contribute to GERD:

GERD has been linked to a variety of respiratory and laryngeal complaints such as laryngitis, chronic cough, pulmonary fibrosis, earache, and asthma, even when not clinically apparent. These atypical manifestations of GERD is commonly referred to as laryngopharyngeal reflux or as extraesophageal reflux disease (EERD).

Factors that have been linked with GERD, but not conclusively:

In 1999, a review of existing studies found that, on average, 40% of GERD patients also had H. pylori infection.[17] The eradication of H. pylori can lead to an increase in acid secretion,[18] leading to the question of whether H. pylori-infected GERD patients are any different than non-infected GERD patients. A double-blind study, reported in 2004, found no clinically significant difference between these two types of patients with regard to the subjective or objective measures of disease severity.[19]

GERD is largely preventable through changes in lifestyle, which are also used as treatment (see below).

Sleep on the left side, or with your upper body raised.
Relief is often found by raising the head of the bed, raising the upper body with pillows, or sleeping sitting up.[20] The upper body must be raised, not just the head; pillows that only raise the head do little for heartburn and put strain on the neck. Sleeping on the left side also keeps gravity working for you, keeping your stomach below your esophagus.[21]
Eat smaller meals.
Eating a big meal causes excess stomach acid production, so attacks can be minimized by eating smaller meals. It is also important to avoid eating shortly before bedtime.[12]

Lose weight.
Gaining even a few pounds increases your risk of heartburn.[20] Exactly why isn't clear, but the leading theory is that more body fat puts more pressure on the stomach, which can cause highly acidic stomach contents to reflux to the lower esophageal sphincter. For the same reason, tight clothing around the abdomen can also increase the risk of heartburn.

Avoid acidic and rich foods.
Though less well supported by evidence,[20] a sufferer may benefit from avoiding foods that trigger their symptoms. These commonly include acidic fruit or juices, fatty foods, coffee, tea, onions, peppermint, chocolate, especially shortly before bedtime.[22]

Three types of treatments exist for GERD. These include lifestyle modifications, medications, and surgery.

Certain foods and lifestyle are considered to promote gastroesophageal reflux, but a 2006 review suggested that evidence for most dietary interventions is anecdotal; only weight loss and elevating the head of the bed were supported by evidence.[20] A subsequent randomized crossover study showed benefit by avoiding eating two hours before bedtime.[12]

The following may exacerbate the symptoms of GERD:

Sleeping on the left side has been shown to reduce nighttime reflux episodes in patients.[21]

A meta-analysis suggested that elevating the head of the bed is an effective therapy, although this conclusion was only supported by nonrandomized studies.[20] The head of the bed can be elevated by plastic or wooden bed risers that support bed posts or legs, a therapeutic bed wedge pillow, a wedge or an inflatable mattress lifter that fits in between mattress and box spring or a hospital bed with an elevate feature. The height of the elevation is critical and must be at least 6 to 8 inches (15 to 20 cm) to be at least minimally effective to prevent the backflow of gastric fluids. Some innerspring mattresses do not work well when inclined and may cause back pain; some prefer foam mattresses. Some practitioners use higher degrees of incline than provided by the commonly suggested 6 to 8 inches (15 to 20 cm) and claim greater success.

A number of drugs are approved to treat GERD, and are among the most prescribed medication in Western countries.

Clinical trials which compare GERD treatments head-to-head provide physicians with critical information. Unfortunately most pharmaceutical-company sponsored studies are conducted versus placebo and not an active control. However, the DIAMOND has shown rough equivalence of efficacy between a "step-up" approach to therapy (antacids, followed by histamine antagonists, followed by PPIs) and a "step-down" approach (the reverse). The primary endpoint of the study was treatment success after six months, and was achieved for 70% of patients in "step-down" versus 72% of patients in "step-up."[27]

The standard surgical treatment is the Nissen fundoplication. In this procedure the upper part of the stomach is wrapped around the lower esophageal sphincter (LES) to strengthen the sphincter and prevent acid reflux and to repair a hiatal hernia. The procedure is often done laparoscopically.[28] When compared to medical management laparoscopic fundoplication had better results at 1 year.[29] In addition, laparoscopic fundoplication may reduce SF-36 score (quality of life questionnaire) among patients with gastro-esophageal reflux disease as compared to medical management according to a Cochrane systematic review of randomized controlled trials.[30] There were statistically significant improvements in quality of life at 3 months and 1 year after surgery compared to medical therapy, with an SF-36 general health score mean difference of -5.23 in favor of surgery.[citation needed]

An obsolete treatment is vagotomy ("highly selective vagotomy"), the surgical removal of vagus nerve branches that innervate the stomach lining. This treatment has been largely replaced by medication.

Another treatment is transoral incisionless fundoplication (TIF) with the use of a device called Esophyx, which allows doctors to rebuild the valve between the stomach and the esophagus by going through the esophagus.[31]

In 2000 the U.S. Food and Drug Administration (FDA) approved two endoscopic devices to treat chronic heartburn. One system, Endocinch, puts stitches in the LES to create little pleats that help strengthen the muscle. However, long-term results were disappointing, and the device is no longer sold by Bard. Another, the Stretta Procedure, uses electrodes to apply radio frequency energy to the LES. The long-term outcomes of both procedures compared to a Nissen fundoplication are still being determined.

Subsequently the NDO Surgical Plicator was cleared by the FDA for endoscopic GERD treatment. The Plicator creates a plication, or fold, of tissue near the gastroesophageal junction, and fixates the plication with a suture-based implant. The company ceased operations in mid 2008, and the device is no longer on the market.

In pregnancy dietary modifications and lifestyle changes may be attempted but often have little effect. Calcium-based antacids are recommended if these changes are not effective. Aluminum- and magnesium antacids are also safe as is ranitidine.[32]

In Western populations, the prevalence range for GERD is 10% to 20% of the population. For instance, an estimated 3.4 million to 6.8 million Canadians are GERD sufferers. The prevalence rate of GERD in developed nations is also tightly linked with age, with adults aged 60 to 70 being the most commonly affected. The combination of longer life expectancy and aging populations in the developed world is expected to lead to an increase in GERD prevalence in the years to come.[36]