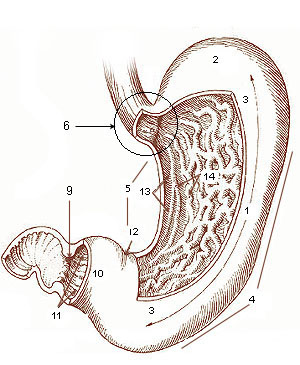 Caption2 = Diagram of the stomach, showing its anatomical landmarks ("Antrum cardiacum" marks the opening of the cardia).
Precursor =
System =
Artery =
Vein =
Nerve =
Lymph =
MeshName =
MeshNumber =
DorlandsPre = c_10
DorlandsSuf = 12214493
The cardia (also known as Z-line or esophagogastric junction [eMedicineDictionary|esophagogastric+junction] or gastroesophageal junction [LoyolaMedEd|Radio/curriculum/GI/Image105b.jpg] [ [http://cellbio.utmb.edu/microanatomy/digestive/Esophagus.htm Lab Exercises- Esophagus ] ] [ [http://www.cancer.org/docroot/cri/content/cri_2_4_1x_what_is_esophagus_cancer_12.asp?sitearea=cri ACS :: What Is Cancer of the Esophagus? ] ] [ [http://www.cancer.gov/Templates/db_alpha.aspx?CdrID=302458 Definition of gastroesophageal junction - NCI Dictionary of Cancer Terms ] ] ) is the anatomical term for the junction orifice of the and the . At the cardia, the of the esophagus transitions into .

There is disagreement in the academic anatomy community over whether the cardia is part of the stomach, part of the esophagus or a distinct entity, as described in this article. The difference is more than semantic when used in clinical studies and applied to individual patients.

Classical textbooks, and some other resources [SUNYAnatomyLabs|37|06|01|03 - "Abdominal Cavity: The Stomach"] , describe the cardia as the first of 4 regions of the stomach. This makes sense histologically because the mucosa of the cardia is the same as that of the stomach.

Many recent writings describe it as the esophageal sphincter.

During , the ES allows the food bolus to pass into the stomach. It prevents , a mixture of bolus, , and s, from returning up the esophagus. The ES is aided in the task of keeping the flow of materials in one direction by the diaphragm.

* nonkeratinized in the
* in the

However, in , the epithelial distinction may vary, so the histological border may not be identical with the functional border.

The can be seen in this region. They can be distinguished from other stomach glands ( and ) because the glands are shallow and simple tubular.

Deficiencies in the strength or the efficiency of the LES lead to various medical problems involving acid damage on the esophagus.

In , one of the defects is failure of the LES to relax properly.

The word comes from the Greek "kardia" meaning "heart", the cardiac orifice of the stomach.

* Artificial cardia, that can be used to fight, between other diseases, , and .