listen), Papiamentu: Antia Hulandes[2]), also referred to informally as the Dutch Antilles,[3] was an autonomous Caribbean country within the Kingdom of the Netherlands, consisting of two groups of islands in the Lesser Antilles: Aruba, Bonaire and Curaçao (ABC Islands), in Leeward Antilles just off the Venezuelan coast; and Sint Eustatius, Saba and Sint Maarten (SSS Islands), in the Leeward Islands southeast of the Virgin Islands.

Aruba seceded in 1986 as a separate country within the Kingdom of the Netherlands, and the rest of the Netherlands Antilles was dissolved on 10 October 2010,[3] resulting in two new constituent countries, Curaçao and Sint Maarten, with the other islands joining the Netherlands as "special municipalities", officially public bodies.[4] 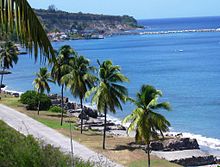 In the 18th century, Sint Eustatius was the most important Dutch island in the Caribbean.

In the second half of the 18th century Sint Eustatius became the commercial hub of the north-eastern Caribbean, earning the nickname "The Golden Rock." This invoked the envy of the French and English who from 1795 made sure the island lost that position by occupying the island and ruining it—the French through their taxes and the English by closing the island off and diverting all trade to their own islands.

From 1815 onwards, Curaçao and Dependencies formed a colony of the Kingdom of the Netherlands. Slavery was abolished in 1863, and in 1865 a government regulation for Curaçao was enacted that allowed for some very limited autonomy for the colony. Though this regulation was replaced by a constitution (Dutch: Staatsregeling) in 1936, the changes to the government structure remained superficial, and Curaçao continued to be ruled as a colony.[5]

The island of Curaçao was hit hard by the abolition of slavery in 1863. Its prosperity (and that of neighboring Aruba) was restored in the early 20th century with the construction of oil refineries to service the newly discovered Venezuelan oil fields.

Colonial rule ended after the conclusion of the Second World War. Queen Wilhelmina had promised in a 1942 speech to offer autonomy to the overseas territories of the Netherlands, and British and American occupation—with consent by the Dutch government—of the islands during the war led to increasing demands for autonomy within the population as well.[6]

Flag of the Netherlands Antilles after Aruba seceded in 1986.

Of the five islands, Sint Maarten and Curaçao voted for status aparte, Saba and Bonaire voted for closer ties to the Netherlands, and Sint Eustatius voted to stay within the Netherlands Antilles.

The Netherlands Antilles were not part of the European Union, but instead listed as overseas countries and territories (OCTs). This status was kept for all the islands after dissolution, and will be kept until at least 2015.

The flat landscape of Klein Bonaire 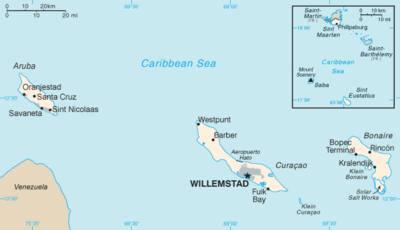 Map of the Netherlands Antilles before the secession of Aruba.

The two island groups of which the Netherlands Antilles consisted were:

The windward islands are all of volcanic origin and hilly, leaving little ground suitable for agriculture. The leeward islands have a mixed volcanic and coral origin. The highest point was Mount Scenery, 877 metres (2,877 ft), on Saba (also the highest point in all the Kingdom of the Netherlands).

The Netherlands Antilles had a tropical climate, with warm weather all year round. The windward islands are subject to hurricanes in the summer months, while the leeward Islands are warmer and drier.

Tourism, petroleum transshipment and oil refinement (on Curaçao), as well as offshore finance were the mainstays of this small economy, which was closely tied to the outside world. The islands enjoyed a high per capita income and a well-developed infrastructure as compared with other countries in the region.

Almost all consumer and capital goods were imported, with Venezuela, the United States, and Mexico being the major suppliers, as well as the Dutch government which supports the islands with substantial development aid. Poor soils and inadequate water supplies hampered the development of agriculture. The Antillean guilder had a fixed exchange rate with the United States dollar of 1.79:1.

A large percentage of the Netherlands Antilleans descended from European colonists and African slaves who were brought and traded here from the 17th to 19th centuries. The rest of the population originated from other Caribbean islands as well as Latin America, East Asia and elsewhere in the world. In Curaçao there was a strong Jewish element going back to the 17th century.

The language Papiamentu was predominant on Curaçao and Bonaire (as well as the neighboring island of Aruba). This creole descended from Portuguese and West African languages with a strong admixture of Dutch, plus subsequent lexical contributions from Spanish and English. An English-based creole dialect, formally known as Netherlands Antilles Creole, was the native dialect of the inhabitants of Sint Eustatius, Saba and Sint Maarten.

After a decades-long debate, English and Papiamentu had been made official languages alongside Dutch in early March 2007.[18] Legislation was produced in Dutch but parliamentary debate was in Papiamentu or English, depending on the island. Due to a massive influx of immigrants from Spanish speaking territories such as the Dominican Republic in the Windward Islands, and increased tourism from Venezuela in the Leeward Islands, Spanish had also become increasingly used.

The majority of the population were followers of the Christian faith, with a Protestant majority in Sint Eustatius and Sint Maarten, and a Roman Catholic majority in Bonaire, Curaçao and Saba. Curaçao also hosted a sizeable group of followers of the Jewish faith, descendants of a Portuguese group of Sephardic Jews that arrived from Amsterdam and Brazil from 1654.

Most Netherlands Antilleans were Dutch citizens and this status permitted and encouraged the young and university-educated to emigrate to the Netherlands. This exodus was considered to be to the islands' detriment, as it created a brain drain. On the other hand, immigrants from the Dominican Republic, Haiti, the Anglophone Caribbean and Colombia had increased their presence on these islands in later years.

See also: Music of Aruba and the Netherlands Antilles, Culture of St. Martin, and Culture of Saba 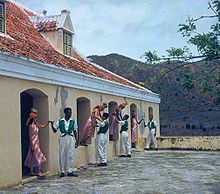 A Bulawaya dance in Curaçao

The origins of the population and location of the islands gave the Netherlands Antilles a mixed culture.

Tourism and overwhelming media presence from the United States increased the regional United States influence. On all the islands, the holiday of Carnival had become an important event after its importation from other Caribbean and Latin American countries in the 1960s. Festivities included "jump-up" parades with beautifully colored costumes, floats, and live bands as well as beauty contests and other competitions. Carnival on the islands also included a middle-of-the-night j'ouvert (juvé) parade that ended at sunrise with the burning of a straw King Momo, cleansing the island of sins and bad luck.

Venezuelan President Hugo Chávez claimed that the Netherlands was helping the USA to invade Venezuela due to military games in 2006.[19] Curaçao is under consideration as a Cooperative Security Location, not a full Main Operating Base.