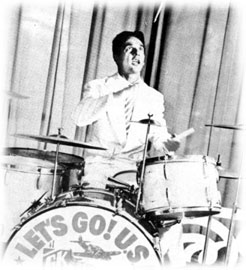 Gene Krupa (, &ndash; , ) was an influential
American and , known for his highly energetic and flamboyant style.

Eugene Bertram Krupa was born to Polish parents in . He began playing professionally in the mid 1920s with bands in . He broke into the Chicago scene in 1927, when he was picked by MCA to become a member of " and Her Playboys", the first notable American Jazz band (outside of all-girl bands) to be led by a female musician. The Playboys were the house band at "The Golden Pumpkin" nightclub in Chicago and also toured extensively throughout the eastern and central United States.

Krupa made his first recordings in 1927, with a band under the leadership of banjoist and "fixer" (and sometime singer, who did not appear on the records), : along with other recordings beginning in 1924 by musicians known in the "Chicago" scene such as Bix Beiderbecke, these sides are examples of white "Chicago Style" jazz. The numbers recorded at that session were: 'China Boy', 'Sugar', 'Nobody's Sweetheart' and 'Liza'. The McKenzie - Condon sides are also notable for being the first records to feature a full drum kit. Eddie Condon describes what happened in the Okeh studio on that day (in 'We Called It Music' - pub: Peter Davis, 1948):

cquote|Mezzrow (Milton "Mezz" Mezzrow) was helping Krupa set up his drums. 'What are you going to do with those?' Rockwell (Okeh's 'A&R' man in the 1920's) asked. 'Play them,' Krupa said simply. Rockwell shook his head. 'You can't do that,' he said. 'You'll ruin our equipment. All we've ever used on records are snare drums and cymbals.' Krupa, who had been practicing every day at home, looked crushed. 'How about letting us try them?' I asked. 'The drums are the backbone of the band. They hold us up.' I could see that Rockwell was leery of the whole business; drums or no drums, I figured, we are probably going to get tossed out. 'Let the kids try it', McKenzie said. 'If they go wrong I'll take the rap'. I didn't know until long afterwards that Red had guaranteed our pay for the job'...

Quietly we waited for the playback. When it came, pounding out through the big speaker, we listened stiffly for a moment. We had never been an audience for ourselves...Rockwell came out of the control-room smiling. 'We'll have to get some more of this... (Rockwell nodded towards Krupa): didn't bother the equipment at all,' he said. 'I think we've got something,'.

Krupa also appeared on six recordings made by the Thelma Terry band in 1928. [http://www.redhotjazz.com/terry.html] .

In 1929 he moved to and worked with the band of . In 1934 he joined 's band, where his featured drum work — especially on the hit "Sing, Sing, Sing" — made him a national . In 1938, after a public fight with Goodman at the Earl Theater in Philadelphia, he left Goodman to launch his own band and had several hits with singer and . Krupa made a memorable cameo appearance in the 1941 film "", in which he and his band performed an extended version of the hit "Drum Boogie".

on sax. It was one of the largest dance bands of the era, sometimes containing up to forty musicians. He gradually cut down the size of the band in the late 1940s, and from 1951 on led a trio or quartet, often featuring the multi-instrumentalist Eddie Shu on tenor sax, clarinet and harmonica. He appeared regularly with the "Jazz At the Philharmonic" shows.

He continued to perform in the 1960s even in famous clubs like the Metropole near Times Square in New York. Krupa retired in the late 1960s, although he occasionally played in public in the early 1970s until shortly before his death from and in at age sixty-four. He was buried in Holy Cross Cemetery in .

Many consider Krupa to be one of the most influential of the 20th century, particularly regarding the development of the . But he made history in 1927 as the first kit drummer ever to record using a pedal. His drum method was published in 1938 and immediately became the standard text. He is also credited with inventing the on the snare drum.

His influence continued in 1935 when he became a star with Benny Goodman's Orchestra, prominently featuring drums. At Krupa's urging, Slingerland developed tom-toms with tuneable top and bottom heads, which immediately became important elements of virtually every drummer's set-up. Krupa also developed and popularised many of the techniques that became standards. His collaboration with of the developed the stand and standardized the names and uses of the , the , the , the and the .

Krupa has been cited as an influence by 1960s rock drummers such as of , of , of , of Kiss (to whom Krupa gave personal lessons), of Rush, and of . The British techno-rock group had a hit with "Krupa" which featured the sampled phrase from the movie ""; "Now back to Gene Krupa's syncopated style." The song itself is an electronic dance track written in the style of Gene Krupa, giving the impression of Krupa's style in the form of a 1990s dance track, blending his musical idioms with a modern song using samples and synthesised basslines.

Krupa owed much to , who came before him, and there is an often-repeated story that in the mid-30's, when Krupa was at his peak with the Goodman band, there was a cutting contest against Webb's band at the Savoy in Harlem, over who was the better drummer. After a fierce battle between the two, the crowd chose Webb, and Krupa humbly deferred to his mentor.

Krupa's popularity was acknowledged in the 1946 cartoon, "", in which a rotoscoped Krupa's dynamic drumming plays a prominent role in an impromptu jam session.

In 1979, Krupa became the first drummer inducted into the Hall of Fame.

In 1996, Krupa was briefly alluded to in The Simpsons Episode, "Hurricane Neddy", By Ned Flanders' beatnik father

In 2007, a "Gene Krupa Story" musical was being developed by Berlin-based Arthor Von Blomberg with pianist and associates and this will be performed in various locations in 2008.