A dense plasma focus (DPF) is a machine that produces, by electromagnetic acceleration and compression, a short-lived plasma that is so hot and dense that it can cause nuclear fusion and emit X-rays. The electromagnetic compression of the plasma is called a pinch. It was invented in the early 1960s by J.W. Mather and also independently by N.V. Filippov. The plasma focus is similar to the high-intensity plasma gun device (HIPGD) (or just plasma gun), which ejects plasma in the form of a plasmoid, without pinching it.

Intense bursts of X-rays and charged particles are emitted, as are nuclear fusion neutrons,[1] when operated in deuterium. There is ongoing research that demonstrates potential applications as a soft X-ray source[2] for next-generation microelectronics lithography, surface micromachining, pulsed X-ray and neutron source for medical and security inspection applications and materials modification,[3] among others.

An important characteristic of the dense plasma focus is that the energy density of the focused plasma is practically a constant over the whole range of machines, from sub-kilojoule machines to megajoule machines, when these machines are tuned for optimal operation. This means that a small table-top-sized plasma focus machine produces essentially the same plasma characteristics (temperature and density) as the largest plasma focus. Of course the larger machine will produce the larger volume of focused plasma with a corresponding longer lifetime and more radiation yield.

Even the smallest plasma focus has essentially the same dynamic characteristics as larger machines, producing the same plasma characteristics and the same radiation products. This is due to the scalability of plasma phenomena.

See also plasmoid, the self-contained magnetic plasma ball that may be produced by a dense plasma focus. 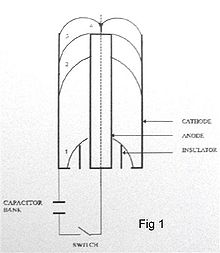 The basic configuration of the Mather type 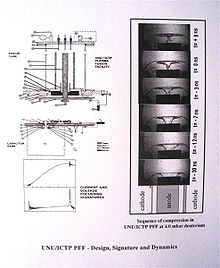 Typical design, focusing signatures (on voltage and current waveforms, 3 microsec from start to voltage spike) and the radial implosion and breakup dynamics shown in a 6-frame nitrogen laser shadowgraphic sequence over a period of about 40 ns.

The charged bank of electrical capacitors (also called a Marx bank or Marx generator) is switched onto the anode. The gas breaks down. A rapidly rising electric current flows across the backwall electrical insulator, axisymmetrically, as depicted by the path (labeled 1) as shown in the fig. 1. The axisymmetric sheath of plasma current lifts off the insulator due to the interaction of the current with its own magnetic field (Lorentz force). The plasma sheath is accelerated axially, to position 2, and then to position 3, ending the axial phase of the device.

The whole process proceeds at many times the speed of sound in the ambient gas. As the current sheath continues to move axially, the portion in contact with the anode slides across the face of the anode, axisymmetrically. When the imploding front of the shock wave coalesces onto the axis, a reflected shock front emanates from the axis until it meets the driving current sheath which then forms the axisymmetric boundary of the pinched, or focused, hot plasma column.

The dense plasma column (akin to the Z-pinch) rapidly pinches and undergoes instabilities and breaks up. The intense electromagnetic and particle bursts, collectively referred to as multi-radiation occur during the dense plasma and breakup phases. These critical phases last typically tens of nanoseconds for a small (kJ, 100 kA) focus to around a microsecond for a large (MJ, several MA) focus. 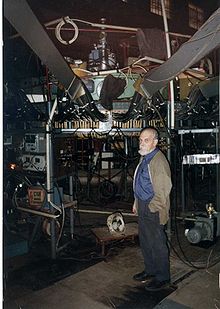 , or the current linear density divided by the square root of the mass density of the fill gas.[5]

For example for neutron-optimised operation in deuterium the value of this critical parameter, experimentally observed over a range of machines from kilojoules to hundreds of kilojoules, is: 9 A/(m·Torr0.5), or 780 kA/(m·Pa0.5), with a remarkably small deviation of 10% over such a large range of sizes of machines.

Thus if we have a peak current of 180 kA we require an anode radius of 10 mm with a deuterium fill pressure of 4 Torr (530 Pa). The length of the anode has then to be matched to the risetime of the capacitor current in order to allow an average axial transit speed of the current sheath of just over 50 mm/μs. Thus a capacitor risetime of 3 μs requires a matched anode length of 160 mm.

The above example of peak current of 180 kA rising in 3 µs, anode radius and length of respectively 10 and 160 mm are close to the design parameters of the UNU/ICTP PFF (United Nations University/International Centre for Theoretical Physics Plasma Fusion Facility).[6] This small table-top device was designed as a low-cost integrated experimental system for training and transfer to initiate/strengthen experimental plasma research in developing countries.[7]

There is a network of ten identical DPF machines, operating in some eight countries and producing postgraduate students and research papers in machine optimization and diagnostics (soft x-rays, neutrons, electron and ion beams), applications (microlithography, micromachining, materials modification and fabrication, imaging and medical, astrophysical simulation) and modeling and computation. The network was organised by Sing Lee in 1986 and is coordinated by the Asian African Association for Plasma Training, AAAPT. A simulation package, the Lee Model,[8] has been developed for this network but is applicable to all plasma focus devices. The code typically produces excellent agreement between computed and measured results,[9] and is available for downloading as a Universal Plasma Focus Laboratory Facility. The Institute for Plasma Focus Studies IPFS[10] was founded on 25 February 2008 to promote correct and innovative use of the Lee Model code and to encourage the application of plasma focus numerical experiments. IPFS research has already extended numerically-derived neutron scaling laws to multi-megajoule experiments.[11] These await verification. Numerical experiments with the code have also resulted in the compilation of a global scaling law indicating that the well-known neutron saturation effect is better correlated to a scaling deterioration mechanism. This is due to the increasing dominance of the axial phase dynamic resistance as capacitor bank impedance decreases with increasing bank energy (capacitance).

The International Centre for Dense Magnetised Plasmas (ICDMP) in Warsaw Poland, operates several plasma focus machines for an international research and training programme. Among these machines is one with energy capacity of 1 MJ making it one of the largest plasma focus devices in the world.

In Argentina there is an Inter-institutional Program for Plasma Focus Research since 1996, coordinated by a National Laboratory of Dense Magnetized Plasmas (www.pladema.net) in Tandil, Buenos Aires. The Program also cooperates with the Chilean Nuclear Energy Commission, and networks the Argentine National Energy Commission, the Scientific Council of Buenos Aires, the University of Center, the University of Mar del Plata, The University of Rosario, and the Institute of Plasma Physics of the University of Buenos Aires. The program operates six Plasma Focus Devices, developing applications, in particular ultrashort tomography and substance detection by neutron pulsed interrogation. Chile currently operates the facility SPEED-2, the largest Plasma Focus facility of the southern hemisphere. PLADEMA also contributed during the last decade with several mathematical models of Plasma Focus. The thermodynamic model was able to develop for the first time design maps combining geometrical and operational parameters, showing that there is always an optimum gun length and charging pressure which maximize the neutronic emissions. Currently there is a complete finite-elements code validated against numerous experiments, which can be used confidently as a design tool for Plasma Focus.

Several groups have proposed that fusion power based on the DPF could be viable, possibly even with low-neutron fuel cycles like p-B11. The feasibility of net power from p-B11 in the DPF requires that the bremsstrahlung losses be reduced by quantum mechanical effects induced by the powerful magnetic field. The high magnetic field will also result in a high rate of emission of cyclotron radiation, but at the densities envisioned, where the plasma frequency is larger than the cyclotron frequency, most of this power will be reabsorbed before being lost from the plasma. Another advantage claimed is the capability of direct conversion of the energy of the fusion products into electricity, with an efficiency potentially above 70%. Experiments and computer simulations to investigate the capability of DPF for fusion power are underway at Lawrenceville Plasma Physics (LPP) under the direction of Eric Lerner, who explained his "Focus Fusion" approach in a 2007 Google Tech Talk.[12] On November 14, 2008, Lerner received funding for continued research, to test the scientific feasibility of Focus Fusion.[13] On October 15, 2009, the DPF device "Focus Fusion-1" achieved its first pinch.[14] On January 28th, 2011, LPP published initial results including experimental shots with considerably higher fusion yields than the historical DPF trend.[15]

Since the beginning of 2009, a number of new plasma focus machines have been/are being commissioned including the INTI Plasma Focus in Malaysia, the NX3 in Singapore and the first plasma focus to be commissioned in a US university in recent times, the KSU Plasma Focus at Kansas State University which recorded its first fusion neutron emitting pinch on New Year's Eve 2009.