The Rural Municipality of Corman Park No. 344, Saskatchewan surrounds the city of Saskatoon, Saskatchewan. RM of Corman Park No. 344 started as a 3 × 3 township square RM, and expanded to a very large RM. It was formed in 1970 according to the Saskatchewan Gazette by combining the smaller rural municipalities of Cory 344, Warman 374, and Park 375. RM 374 Warman and RM 375 Park were disorganized at the end of 1969. The rural municipality must work closely with the Meewasin Valley Authority that has responsibility for the area around the Saskatchewan River.

There is a Super Dual Auroral Radar Network Radar site operated by the University of Saskatchewan in the rural municipality. 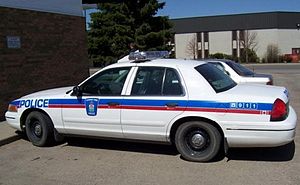 Corman Park Police Cruiser at the Municipal office in Saskatoon

[1] The Corman Park Police Service acts in partnership with the Royal Canadian Mounted Police under the terms of Order In Council 109/2001 as amended by O.I.C. 92/2006. The Service opearates out of the Municipal office in Saskatoon.

As of the census in 2001, there were 8,093 people living in the RM of Corman Park. By the 2006 census, the population had increased 3.8%, to 8,351. It has by far the largest population of any rural municipality in Saskatchewan, more than double that of the next largest (Buckland No. 491 in 2001; Edenwold No. 158 in 2006). The area immediately surrounding Saskatoon is part of the Saskatoon Regional Health Authority. The South Saskatchewan River flows from the southwest corner to the northeast corner of the RM.

The area's German Canadian population is much higher proportionately than the national or provincial averages: 43.4% (3,645 persons).[6]

Government of the RM

The offices for the RM are located in Lawson Heights, Saskatoon. All rural municipalities have elected councils, along with an elected head called a reeve. As of November 2011, the reeve is Mel Henry, and the councillors are:

A majority of voters in a November 2011 plebiscite favoured the council be changed from 11 to 8 councillors. This is controversial and the elected councillors have requested that the provincial government not take action on the plebiscite. It is unclear whether the council will continue to have 11 councillors or will change to 8.[7]