Religion in The Simpsons

Religion in The Simpsons

Religion is one of the major themes on the American animated television series The Simpsons.[1] Much of the series religious humor satirizes aspects of Christianity. However, the series is not necessarily anti-religious, as the Simpsons themselves are Christian and some episodes (such as "Bart Sells His Soul" and "Alone Again, Natura-Diddily") are actually spiritual in nature. Most episodes call for a more sensible, tolerant and less fanatical religious devotion.

For example, the episode "The Monkey Suit" depicts Ned Flanders' campaign against evolution. This campaign is opposed by Lisa Simpson, who eventually explains that she respects his belief in creationism but believes it should not be taught in schools. On December 2009, an article published in L'Osservatore Romano, the Holy See's official newspaper, praised The Simpsons for its "realistic" way of dealing with religion. "Homer finds in God his last refuge, even though he sometimes gets His name sensationally wrong. But these are just minor mistakes, after all; the two know each other well", the article said.[2]

Most of the town, including the Simpsons, attend church on Sundays, indicating that religion is an 'important part' of the town life. The most religious characters on the show are Ned Flanders and Reverend Timothy Lovejoy. Flanders, a graduate of Oral Roberts University, is an ultra-conservative Christian and appears to express little tolerance for other faiths and sexualities, claiming they are all hedonistic, and those who follow said lifestyles will go to Hell. Nevertheless, Ned is perhaps the most genuinely compassionate character on the show and is an exemplar of charity and the golden rule. He usually has a positive outlook on life and does not go out of his way to express his intolerance. Lovejoy seems to resent the fact that Dr Julius Hibbert's family joined the first African Methodist Episcopal Church of Springfield, while Ned tells Apu Nahasapeemapetilon, who is a Hindu, that he might as well be praying to Hawkman. In another episode, Lovejoy says to Ned Flanders, during an annoying phone call, "Ned, have you considered any of the other major religions? They're all pretty much the same."

Although Homer attends church, has been baptized and has even had conversations with God, he has indicated, on numerous occasions, that he is not religious. For example, in The Simpsons Movie, before entering the church, he says, "Relax, those pious morons are too busy talking to their phony-baloney God."

Lisa Simpson was portrayed as Christian in the second season episode "Homer vs. Lisa and the 8th Commandment"; however, since "She of Little Faith", she has been a secular Buddhist, although she accepts her family's beliefs (after advice from Richard Gere), going to church with them and celebrating Christian holidays but is now considered an avid atheist.

Yahweh or "God" has appeared several times – with a distinctively five-fingered hand (compared to other characters' four fingers) – watching over and sometimes interacting with the show's characters (usually Ned Flanders or Homer). In many episodes, Jesus, whom Homer oftens calls 'Jebus', is portrayed as a man with a long brown beard and white clothing, particularly when Homer is sent to heaven. The Hindu deity Vishnu sits in the center of the earth, controlling the world with numerous levers.[3] There are also numerous references to the Hindu deity Ganesh, mostly by Homer when interacting with Apu. Other episodes have shown both Ned Flanders and Mr. Burns as The Devil and also made passing references to Krishna and even Spongebob Squarepants in Deity form.

The Western Branch of American Reform Presbylutheranism (a cross between Presbyterianism and Lutheranism) is the fictional Protestant Christian religion that Rev. Lovejoy preaches at the First Church of Springfield. The church is the town's main place of worship, which most Springfielders attend, though it is not the only church in Springfield (AME, Catholic and Episcopal churches also exist). The unusually specific name is a parody of Protestant reformed churches branching off into other denominations and movements.

Lovejoy is a member of the clergy of Presbylutheranism. The denomination, headquartered in Michigan City, Indiana, is led by "His Holiness, the Parson", who is also the elected head of the National Congress of Deacons.[4]

Outlook on other religions

The church still remains at odds with Catholicism (even though they stopped feuding with each other). Rev. Lovejoy has a rivalry with a local Episcopal church,[6] and he engages in a brawl with a Catholic priest after an exchange of hostilities.[7]

Lovejoy dislikes Unitarians. When he offers the Simpson children a bowl of Unitarian ice cream at a church social function and Lisa points out that it is empty, Lovejoy indicates that is the point.

Smaller, regional religions, for instance those of the south Pacific, are seen as inferior, and missionary activity is employed to ridicule away the beliefs of aboriginal peoples.[8] The church also has enemies on a more social level, including monogamous homosexuals and stem cells. However, the Presbylutherans have members of varying levels of religiosity and devotion, and are generally not at odds with modernism. It could be seen as a conservative Mainline Protestant church. 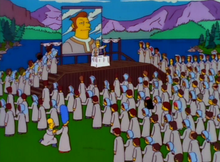 The Movementarians is a brainwashing cult, which for a brief time ensnared many of Springfield's citizens in the episode "The Joy of Sect", making them sign over their savings and houses and then work picking lima beans. The Movementarians are led by a mysterious figure known only as "The Leader" who promises to fly them to a planet called Blisstonia by a space ship, though it is shown that the "spaceship" is a pedal-powered aircraft with The Leader flying it. He tries to depart with everyone's money, but The Leader does not fly very far, crashing on Cletus Spuckler's front porch. Cletus then relieves the Leader of the town's money at gunpoint.

Springfield is home to a small but active Jewish community: the most prominent members including Krusty the Clown, his father Rabbi Krustofsky, and the old Jewish retiree who is a friend of Abe Simpson. Krusty has his first Bar Mitzvah in one episode. Krusty, however, is not very observant. A montage of pictures at the end of a Simpsons Christmas episode showed Krusty lying intoxicated in the gutter, while Rabbi Krustofsky and the old Jewish retiree ran into each other at a local Chinese restaurant on Christmas morning. In the episode "Today I am a Clown", Krusty learns he is not quite Jewish because he never had a Bar Mitzvah. In that episode, his Itchy and Scratchy cartoon, "A Briss Before Dying" parodies Jewish circumcision. The mouse, Itchy, is about to be circumcised by the cat, Scratchy, but instead cuts him in pieces, melts and turns him into a goblet and stamps on him, shouting "Mazel Tov!" Krusty back-announces "And that's what I believe in now."

Excluding the odd reference by Rev. Lovejoy to "churches, synagogues and mosques," condemning Krusty the Clown (who is Jewish) for corrupting the young in one episode, the religion of Islam or Muslim characters had not featured heavily in the show's history until the 2008 episode Mypods and Boomsticks.

Prior to this, major references to Islam or Muslims have been limited. However, in the episode "Marge Simpson in: 'Screaming Yellow Honkers'", Homer proclaims, "I'm gonna die! Jesus, Allah, Buddha, I love you all!" In "The Seven-Beer Snitch", the Simpsons go to see "Song of Shelbyville." There is a lyric in the main song that says that Shelbyville is home to Christians, Muslims, and Jews "although not many of the last two." This makes a Rabbi and an Imam in attendance feel uncomfortable. In "Mayored to the Mob", Homer's bodyguard instructor says, "As a bodyguard your only loyalty is to your protectee; not to your family, not to your country, not to Muhammad." to which Homer asks, "Even during Ramadan?" In "Grift of the Magi" Krusty touched upon many religions by saying, "So, have a merry Christmas, happy Hanukkah, kwazy Kwanzaa, a tip-top Tết, and a solemn, dignified Ramadan."

Episodes with focus on religious topics