The Carrion Crow (Corvus corone) is a member of the passerine order of birds and the crow family which is native to western Europe and eastern Asia.

The Carrion Crow was one of the many species originally described by Linnaeus in his 18th century work Systema Naturae and it still bears its original name of Corvus corone.[2] The binomial name is derived from the Latin Corvus, "Raven",[3] and Greek corone/κορωνη, "crow".[4]

As well as the subspecies of the Hooded Crow being split off as a separate species, there is some discussion whether the eastern race of the Carrion Crow, orientalis is distinct enough to warrant specific status; the two taxa are well separated, and it has been proposed they could have evolved independently in the wetter, maritime regions at the opposite ends of the Eurasian landmass.[5]

The plumage of Carrion Crow is black with a green or purple sheen, much greener than the gloss of the Rook. The bill, legs and feet are also black. It can be distinguished from the Common Raven by its size (48–52 cm or 18 to 21 inches in length) and from the Hooded Crow by its black plumage, but there is frequent confusion between it and the Rook. The beak of the Crow is stouter and in consequence looks shorter, and whereas in the adult Rook the nostrils are bare, those of the Crow are covered at all ages with bristle-like feathers.

This species breeds in western and central Europe, with an allied form or race C. c. orientalis (50–56 cm or 19 to 22 inches in length) occurring in eastern Asia. The separation of these two populations is now believed to have taken place during the last ice age, with the closely allied Hooded Crow (now given species status) filling the gap between. Fertile hybrids occur along the boundary between these two forms indicating their close genetic relationship.[6] This is an example of the parapatric speciation model described by Ernst Mayr. The range of this hybrid of these two species appears to be moving to the northwest. 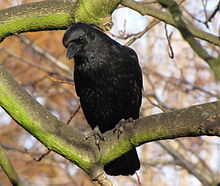 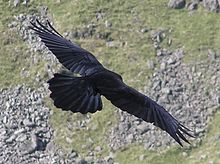 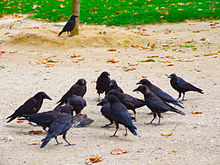 Scavenging around a dead bird in Paris, France

The Rook is generally gregarious and the Crow solitary, but Rooks occasionally nest in isolated trees, and Crows may feed with Rooks; moreover, Crows are often sociable in winter roosts. The most distinctive feature is the voice. The rook has a high-pitched kaaa, but the Crow's guttural, slightly vibrant, deeper croaked kraa is distinct from any note of the rook.[citation needed]

The Carrion Crow is noisy, perching on the top of a tree and calling three or four times in quick succession, with a slight pause between each series of croaks. The wing-beats are slower, more deliberate than those of the Rook.[citation needed]

Like all Corvids, Carrion Crows are highly intelligent, and are among the most intelligent of all animals.[7]

Though an eater of carrion of all kinds, the Carrion Crow will eat insects, worms, grain, small mammals, and scraps and will also steal eggs. Crows are scavengers by nature, which is why they tend to frequent sites inhabited by humans in order to feed on their household waste. Crows will also harass birds of prey or even foxes for their kills. Crows actively hunt and occasionally co-operate with other crows to make kills.

Crows have become highly skilled at adapting to urban environments. In a Japanese city, carrion crows have discovered how to eat nuts that they usually find too hard to tackle. One method is to drop the nuts from height on to a hard road in the hope of cracking it. Some nuts are particularly tough, so the crows drop the nuts among the traffic. That leaves the problem of eating the bits without getting run over, so some birds wait by pedestrian crossings and collect the cracked nuts when the lights turn red.[8]

The bulky stick nest is usually placed in a tall tree, but cliff ledges, old buildings and pylons may be used as well. Nests are also occasionally placed on or near the ground. The nest resembles that of the Common Raven, but is less bulky. The four to six brown-speckled blue or greenish eggs are incubated for 17–19 days by the female alone, who is fed by the male. The young fledge after 32–36 days.[citation needed]

It is not uncommon for an offspring from the previous years to stay around and help rear the new hatchlings.[citation needed] Instead of seeking out a mate, it looks for food and assists the parents in feeding the young.[citation needed]