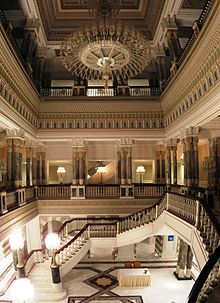 Atrium with staircase in Çırağan 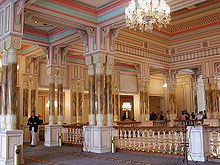 Çırağan Palace (Turkish: Çırağan Sarayı), a former Ottoman palace, is now a five-star hotel of the Kempinski Hotels chain. It is located on the European shore of the Bosporus between Beşiktaş and Ortaköy in Istanbul, Turkey.

The palace, built by Sultan Abdülâziz, was designed by the famous palace architect Nigoğayos Balyan and constructed by his sons Sarkis and Hagop Balyan between 1863 and 1867. This was a period in which all Ottoman sultans used to build their own palaces rather than using those of their ancestors. Çırağan Palace is the last example of this period. The inner walls and the roof were made of wood, the outer walls of colorful marble. The palace is connected with a beautiful marble bridge to the Yıldız Palace on the hill behind. A very high garden wall protects the palace from the outer world.

The construction and the interior decoration of the palace continued until 1872. After he moved in, Sultan Abdülâziz was, however, not able to live long in his magnificent palace. He was found dead in the palace on May 30, 1876, shortly after he was dethroned. His successor, his nephew Sultan Murad V, moved into Çırağan Palace, but reigned after only 93 days. He, who was deposed by his brother Abdülhamid II due to alleged mental illness, lived here under house arrest until his death on August 29, 1904.

During the Second Constitutional Monarchy, Sultan Mehmet V Reşat allowed the parliament to hold their meetings in this building. Only two months after, on January 19, 1910, a great fire destroyed the palace, leaving only the outer walls intact. Called "Şeref Stadı", the place served for many years as a football stadium for the club Beşiktaş J.K..

In 1989, the ruined palace was bought by a Japanese corporation, which restored the palace and added a modern hotel complex next to it in its garden. Today, it serves as luxury suites for the five star Kempinski hotel along with two restaurants that cater to guests.

The Palace was renovated again during the first quarter of 2007, now resembling the authentic palace with the baroqe style and soft colors.