Everybody Loves Raymond is an American television sitcom that originally ran on CBS from September 13, 1996, to May 16, 2005. Many of the situations from the show are based on the real-life experiences of lead actor Ray Romano, creator/producer Phil Rosenthal and the show's writing staff. The main characters on the show are also loosely based on Romano's and Rosenthal's real-life family members.

The show reruns in syndication on different cable channels such as TBS, TV Land, and in most TV markets on local stations.[1] From 2000–2007 KingWorld distributed the show for off-network syndication. In 2008 CBS Television Distribution took over King World's distribution, although its logo is retained on TBS. CBS only owns American syndication rights; ancillary rights are controlled by HBO and Warner Bros. Television (WBTV distributes the series outside the US in conjunction with HBO; while HBO Home Entertainment and Warner Home Video own DVD rights worldwide).

The show revolves around the life of Italian-American Raymond Barone, newspaper sportswriter from Lynbrook, Long Island, New York and his family. Easygoing and flippant, Raymond does not take many things seriously, making jokes in nearly every situation, no matter how troubling or problematic, and constantly avoiding any sort of real responsibility.

Raymond and his wife Debra live with Ally and their identical twin sons Michael and Geoffrey (originally Gregory and Matthew in the pilot). The Barone children, played by real-life siblings, are regular characters but not a major focus. Raymond's parents, Marie and Frank, and brother Robert, live across the street, and frequently make their presence known to the frustration of Raymond and Debra. Debra's frequent complaints about Raymond's family are a running joke. Out of the three unwanted visitors, Debra is particularly put off by Marie — an insulting, controlling and manipulative, though loving, woman who constantly criticizes and antagonizes Debra and coddles Ray, clearly favoring him over Robert, whose impending birth (as was established in one episode) drove her into marriage.

Raymond often finds himself in the middle of all the problems and arguments and proves himself incapable of taking any sort of stand, especially if there is the chance that it will bring down the wrath of his mother on him. His biggest nemesis is his brother Robert, who is insecure and jealous of Raymond for being the favorite son, as well as Raymond's relative success in both his professional and family life. Robert and Raymond are frequently seen fighting like children and picking on each other.

Raymond and Robert's father, Frank, is a very crass and obnoxious person, constantly making insulting and sarcastic remarks to everyone with whom he comes into contact. Largely an absentee father when the boys were growing up, Frank does not like to show his feelings, although, in an effort to make the character a bit more sympathetic, throughout the years several episodes were crafted to show that he actually does love his family.

Raymond and Debra constantly have marital disagreements, with Raymond preferring to watch sports television instead of talking with Debra about important matters. Like his father, Raymond works full time, leaving all the child-rearing responsibilities to Debra, and he has to be bullied into helping with any work around the house. A recurring theme on the show has them having a long interaction each night while in bed, just before going to sleep. 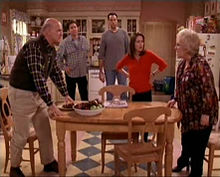 The five principal characters during an argument. Episode: "The Can Opener"

HBO Home Video has released the Complete Series of Everybody Loves Raymond on DVD in Regions 1, 2 and 4. Region 4 Complete Box Set was released on August 13, 2008. In Australia, the first five seasons were re-released in 2006 in slimmer packaging (originals were wide spine cases). Also some were released with a cardboard slip cover.

In 2009, series creator/producer Philip Rosenthal traveled to Russia to adapt the show for local audiences. His experience was documented by a film crew and released as the documentary feature "Exporting Raymond".[3] The Russian version is titled (Russian) Воронины[4] (Voroniny, by family name of main character).[5]

The original American version of the show has been dubbed then broadcast in Poland under the title Wszyscy kochają Romana (Everybody Loves Roman).[6] It was picked up by TVN and is expected to premiere on the network on September 2, 2011.

Series creator Philip Rosenthal created the documentary Exporting Raymond, about his trip to Russia to serve as a consultant in an effort to adapt the format of the show for the Russian audience.

In Egypt a sitcom of 30 episodes called el bab fl bab(close doors) aired in the month of Ramadan is an adaptation of Everybody Loves Raymond as released by the show producer.

Seasonal rankings (based on average total viewers per episode) of Everybody Loves Raymond on CBS.

Note: Each U.S. network television season starts in late September and ends in late May, which coincides with the completion of May sweeps. All times mentioned in this section were Eastern & Pacific

With the exception of the 2004–2005 season, the ratings data seen in this table is from Nielsen Media Research which was published in a May 15, 2005 USA Today article.[7]

The series-finale scored a 20.2 household rating, 32.94 million viewers[8] (29% of all viewers at the time) and an 11.2 rating among adults 18–49. At 8pm, Everybody Loves Raymond: The Last Laugh averaged a 15.3 household rating, 24.52 million viewers and a 7.5 among adults 18–49. Throughout the latter six seasons of the show, Everybody Loves Raymond maintained its position on the top ten rankings.

Main article: List of Everybody Loves Raymond awards and nominations