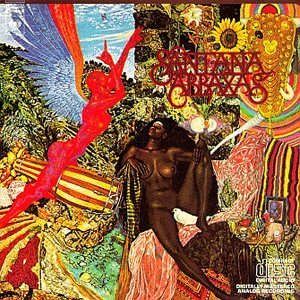 "Abraxas" is the second album by Santana, the Latin rock n' roll group led by guitarist . Consolidating their live success at the in 1969, and the interest generated by their first album the band took some time to issue a follow-up. Released in September 1970, the album's mix of , , , salsa and other influences made it a classic that defined Santana's early sound, and showed a musical maturation from their first album.

Often considered Santana's greatest album, it drew widespread appeal for its mixture of Latin influences with familiar rock and roll themes such as overdriven electric guitar, organ and heavy drums. The album also demonstrates Santana's stylistic versatility, including tracks such as "Samba pa Ti" (a classic slow-burning, seductive piece) ["" by ] and "Incident at Neshabur", both being instrumentals. The latter has several rhythm and time signature changes consistent with its jazz feel. Latin percussion &mdash; congas, bongos and timbales, as well as a conventional rock drum setup, make this Santana's first foray into true Latin rhythm. RS500|205

The album achieved number 7 in the UK album charts [http://www.chartstats.com/albuminfo.php?id=2728]

The title of the album comes from a line from 's book "":

"We stood before it and began to freeze inside from the exertion. We questioned the painting, berated it, made love to it, prayed to it: We called it mother, called it whore and slut, called it our beloved, called it Abraxas..."

In 1998 in Japan, part of Sony Music, also released the remastered version as an . This disc is stereo only, and furthermore, it is a single layer SACD, which means that ordinary CD players will not play it. This disc contains the same bonus tracks as the ordinarly 1998 remastered CD.

The album's cover features the 1961 painting "Annunciation", by .

"Samba Pa Ti" translated into English means " for You".

This instrumental was covered by , who added lyrics. It is also one of the tracks featured in 's book . It was used in the UK as the background music for TV ads for food in 2006.