The European Magpie, Eurasian Magpie, or Common Magpie, (Pica pica), is a resident breeding bird throughout Europe, much of Asia and northwest Africa. It is one of several birds in the crow family named as magpies, and belongs to the Holarctic radiation of "monochrome" magpies. In Europe, "Magpie" is used by English speakers as a synonym for the European Magpie; it is the only magpie in Europe outside the Iberian Peninsula.

The European Magpie is 44–46 centimetres (17–18 in) in length - in the adult over 50% of this is tail - and a wingspan of 52–62 centimetres (20–24 in).[3] Its head, neck and breast are glossy black with a metallic green and violet sheen; the belly and scapulars (shoulder feathers) are pure white; the wings are black glossed with green or purple, and the primaries have white inner webs, conspicuous when the wing is open. The graduated tail is black, shot with bronze-green and other iridescent colours. The legs and bill are black. 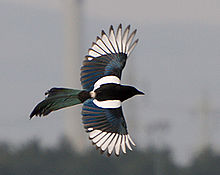 The young resemble the adults, but are at first without much of the gloss on the sooty plumage. The male is slightly larger than the female.[3]

There are numerous subspecies. The northwest African race differs in having a patch of blue bare skin around the eye, no white patch on the rump and an unglossed tail. The southwest Arabian race differs in being smaller, with dull black plumage lacking iridescent tones, and minimal white in the wings. The Siberian races have more extensive white in the wings, and brilliant green iridescence; Korean birds have a purple gloss instead and relatively longer wings and a shorter tail.

Analysis of mtDNA sequences[4] has indicated that the Korean race, P. pica sericea, is very distinct from the other Eurasian forms, and may be a separate species. The North American Black-billed Magpie which looks almost identical to the Eurasian form and was previously considered conspecific is genetically closer to the Yellow-billed Magpie. The main Eurasian lineages of this astoundingly variable species have not been sufficiently sampled to clarify the status of such forms as the northwest African race P. p. mauretanica and the southwest Arabian race P. p. asirensis, which could also be distinct species.

A larger palaeosubspecies of the European Magpie was described as Pica pica major. 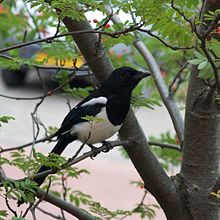 Perching in a mountain ash tree in Manchester, England

The European Magpie is a distinctive species with its pied plumage, long 20–30 centimetres (8–12 in), graduated tail and loud chatter. When Magpies pass each other in open country, they command attention by rapidly moving their wings and chattering. When the bird lands, the long tail is elevated and is carefully carried clear of the ground.

Like other corvids, such as crows, the Magpie usually walks, but it can also hop quickly sideways with wings slightly opened. The Magpie and the rest of its family are fond of bright objects.[citation needed]

The Magpie will eat any animal food. These foods include young birds and eggs, insects, scraps and carrion. The bird will also eat acorns, grain and other vegetable substances.

Magpies are common to suburban areas[5] but can be more shy and cautious in country areas. The birds do not avoid humans unless they are harassed. Sometimes two or more birds display "teasing" behaviour towards animals such as cats. It is thought that this behaviour may be to scare away potential predators and egg thieves.[citation needed] 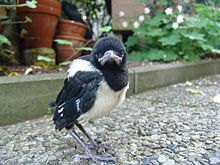 A young European Magpie, not yet fledged.

In winter, Magpies often form groups to feed and roost at night. Early in the year, large numbers collect together for mating in gatherings Charles Darwin described as "marriage meetings".[citation needed]

The magpie has been observed taking small songbirds down in flight. This behaviour was once thought to occur only in birds of prey.[citation needed]

The European Magpie is believed to be among the most intelligent of birds, and among the most intelligent of all animals. Magpies have been observed engaging in elaborate social rituals, possibly including the expression of grief.[6] Mirror self-recognition has been demonstrated in European magpies.[7] The magpie is thus one of a small number of species, and the only non-mammal, known to possess this capability.[8] The cognitive abilities of the European Magpie are taken as evidence that intelligence evolved independently in both corvids/crows and primates. This is indicated by feats such as tool use, their ability to hide and store food across seasons, episodic-like memory, and the ability to use one's own experience in predicting the behavior of conspecifics.[1] Various behaviours have been observed that indicate intelligence. It has been observed that they cut up their food in correctly sized proportions, depending on the size of their young. In captivity magpies have been observed counting up to get food, imitating human voices, and regularly using tools to clean their own cages. In the wild, they organise themselves into gangs, and use complex strategies when hunting other birds, and when confronted by predators.[9] Along with the Jackdaw, the European Magpie has been found to have a neostriatum approximately the same relative size as is found in chimpanzees and humans, and significantly larger than is found in the gibbon.[2] Like other corvids, such as Ravens and Crows, their total brain to body ratio is equal to that of great apes and cetaceans, and only slightly lower than in humans.[10]

Magpies are territorial and stay in their territory all year, even in north of the species range. The pairs are monogamous, and remain together for the duration of their lives. Should one of the two die, the widow or widower will find a new partner from the stock of yearlings.

Mating takes place in spring. In the courtship display, the males rapidly raise and depress their head feathers, uplift, open and close their tails like fans, and call in soft tones quite distinct from their usual chatter. In the display the loose feathers of the flanks are brought over and the primaries, and the patch on the shoulders is spread so as to make the white conspicuous, presumably to attract the female eye. Short buoyant flights and chases are part of the courtship. 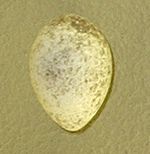 Tall trees are selected by the Magpie for its bulky nest; it is firmly attached to a central fork in the upper branches. The framework of the sticks is cemented with earth and clay, and a lining of the same material is covered with fine roots; above is a stout though loosely built dome of prickly branches with one well-concealed entrance. When the leaves fall these huge nests are plainly visible. Where trees are scarce, and even in well-wooded country, nests are at times built in bushes and hedgerows.

The eggs, small for the size of the bird, number from five to eight, and as many as ten are recorded; they show much variation in ground and marking, but a usual type is blue-green with close specks and spots of brown and grey. They are laid in April, and only one brood is reared unless disaster overtakes the first clutch.

The common name comes from magot pie (pied Margot), first found[11] in Shakespeare's Macbeth.[12] The scientific name Pica is just the Latin word for Magpie.[13] When Linnaeus first described this species in 1758, he named it Corvus pica.[14]

In European folklore the magpie is associated with a number of superstitions[15] surrounding its reputation as an omen of ill fortune. This reputation may derive from the bird's well-known tendency to "steal" shiny objects or its aggressive behaviour toward favoured songbirds.

In Asia the magpie is associated more often with hospitality and good fortune. The Formosan Blue Magpie is the national bird of Taiwan. 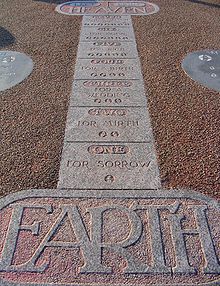 A hopscotch game with the Magpie rhyme

In Britain and Ireland a widespread traditional rhyme records the myth (it is not clear whether it has been seriously believed) that seeing magpies predicts the future, depending on how many are seen. There are many regional variations on the rhyme, which means that it is impossible to give a definitive version.[16][19]

A British children's TV show called Magpie featured a theme song based on the "one for sorrow" rhyme, and featured a large cartoon Magpie as its mascot or logo. A magpie named Snipes with a snobbish disposition is a main character in the film Rock-A-Doodle. Heckle and Jeckle, two magpies created by the Terrytoons cartoon studio, were popular on screen and in comic books. One had an English accent, the other a Brooklyn accent. Two magpies resembling the cartoon birds are featured in Windex commercials on TV. Magpie (Margaret Pye) is the name of a villain in DC Comics known for her grating voice and penchant for stealing shiny objects.

La gazza ladra (The Thieving Magpie) is an opera in two acts by Gioachino Rossini. The very distinct overture is well known, and has been used by the band Marillion. A magpie with a ring in its beak is depicted on several of the band's early albums. Musician Patrick Wolf's song "Magpie", found on The Magic Position, utilizes a version of the magpie rhyme and also references its thieving ways. Magpie is a song by The Mountain Goats, from the album The Sunset Tree. Magpie is also a song by British singer Abraham, from the album Blue For The Most. Radiohead has a song called "Morning Mr Magpie" on their album The King of Limbs. American rock group Counting Crows released the single A Murder of One in 1995 from the album August and Everything After. The song contains version A (per this article) of the Magpie rhyme.

Two English football clubs, Notts County and Newcastle United are nicknamed "The Magpies" due to their black and white striped playing kits. Notts County's club crest depicts a football on which perch two magpies. Thieving Magpie, named for the Thieving Magpie Overture is a popular card in the trading card game Magic: the Gathering. In target shooting the score for a shot striking the outermost division but one is called a "magpie" because it was signalled by a black and white flag.

Bishops were formerly called "magpies" in humour or derision because of their black and white vestments.

Lawyers as vultures, had soared up and down; / Prelates, like Magpies, in the Air had flown.--Howell's Letters: Lines to the knowing reader.[17]