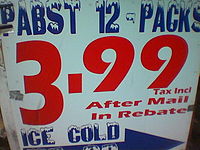 A sales advertisement for a 12 pack of Pabst beer showing only the after rebate price.

A rebate is an amount paid by way of reduction, return, or refund on what has already been paid or contributed. It is a type of sales promotion marketers use primarily as incentives or supplements to product sales. The mail-in rebate (MIR) is the most common. A MIR entitles the buyer to mail in a coupon, a receipt and barcode in order to receive a check for a particular amount, depending on the particular product, time, and often place of purchase. Rebates are offered by either the retailer or the manufacturer of the chosen product. Large stores often work in conjunction with manufacturers, usually requiring two or even three separate rebates for each item. Manufacturer rebates are sometimes valid only at a single store. Rebate forms and special receipts are sometimes printed by the cash register at time of purchase on a separate receipt or available online for download. In some cases, the rebate may be available immediately, in which case it is referred to as an instant rebate. Some rebate programs offer several payout options to consumers, including a paper check, a prepaid card that can be spent immediately without a trip to the bank or even PayPal payout.

Rebates are heavily used for advertised sales in retail stores in the United States, such as Best Buy and Staples. However, Best Buy, in April 2005, announced that they would be eliminating all mail-in-rebates.[1] Personal computer components and electronics seem to have a large portion of rebate sales. For example, an item might be advertised as "$39 after rebate" with the item costing $79 OTD (out-the-door) with a $40 rebate that the customer would need to redeem. The turnaround time is generally four to eight weeks, though some rebates note a period of eight to twelve weeks. In the UK rebates are not common, with manufacturers and retailers preferring to give discounts at the point of sale rather than requiring mail-in or coupons.

Retailer Staples offers the popular Easy Rebates program, which enables customers to use paperless submission for rebates, offers a choice of rewards and quick payment. Rebate provider Parago is credited with redesigning and managing Easy Rebates. After a decade of working together, Staples extended its contract with Parago for another five years in 2010.[2]

Most rebates are handled under contract by rebate clearinghouses that specialize in processing rebates and contest applications. The source of their fees is not readily discernible with conflicting reports from different sides. Roger D. Andersen, former CEO of Young America, a rebate clearinghouse claims that "Young America receives the same fees whether a submission is valid or invalid," giving them no incentive to unfairly invalidate customer rebates.[3] Young America is currently under investigation by the state of Massachusetts for keeping unclaimed rebate checks.[4] Frank Giordano, founder of TCA Fulfillment, claims "We get paid for every redemption request we enter in the system. If we don't put it in the system, we don't get paid.".[5] TCA is also notable for a "Rebate Redemption Guide" that was sent to prospective clients touting the low redemption rates that they would have with TCA as their rebate fulfillment center, promising 20% less than their competitors.[3]

In the United States, Connecticut state regulations section 42-110b-19(e) require retailers who advertise the net price of an item after rebate to pay consumers the amount of that rebate at time of purchase.[6] Rhode Island has similar legislation (Gen. Laws 6-13.1-1).[7] Otherwise, the after-rebate price cannot be advertised as the final price to be paid by the consumer. For example, retailers in Connecticut can advertise only "$40 with a $40 rebate," not "Free After Rebate," unless they give the rebate at the time of purchase,[8][9] 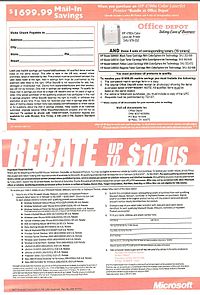 Rebate forms often ask for the same type of information-proof of purchase in the form of a receipt and/or UPC and contact information of the purchaser.

Rebates have become very popular in retail sales within the United States. Retailers and manufacturers have many reasons to offer them:

Benefits and costs for consumers

Rebates may offer customers lower pricing. Deal hunter sites frequently tout the benefits of rebates in making technology affordable: "Rebates are the meat and potatoes of the ultimate tech deal, no matter what you are buying… They are paying you money to buy their stuff. All you have to do is take it."[15]

Industry advisers note that if mail-in rebates go away, they will not be replaced by "instant rebates" of the same value amount because of the loss of the tangible benefits listed above (fiscal accounting, price protection, etc.) Steve Baker, vice president of industry analysis for NPD Group, comments that "It's a case of be careful of what you ask for. You may see some great deals go away."[17]

Rebates take a certain amount of time and effort from the consumer - figuring out the rules, filling out the forms, preparing and dropping off the mailing, cashing in the cheque, keeping track of the paperwork while this is being done. Thus, a rebate can be thought of as being paid to do this paperwork and provide one's personal data to the company. Chances of rebate mailing being lost or failing some criteria may further reduce the expected return on this effort.

If the total estimated time to be spent by the consumer for the whole rebate submission, multiplied by consumer's hourly salary rate (or even the minimum wage), is comparable to or above the rebate amount, then it can be seen as not worth the time.

Consumers who are aware of this, and who value their time, effort and opportunity costs above the value of the rebate may choose to intentionally ignore a non-instant rebate that requires such procedures and assume the out-the-door price when considering the purchase.

On the other hand, if the consumer does not see it this way, or their income and budget are extremely limited or non-existent, and/or they are more concerned with the price than their time for any reason, the rebate may be seen as a reasonable deal.

Consumers enjoy the convenience of receiving rebates on prepaid cards, and 95% of consumers say they would definitely or maybe choose a prepaid rebate card over other options like checks.[18]

It is difficult to get an account of redemption rates from most rebate companies, partly due to a reluctance on the part of rebate fulfillment houses to release confidential business information. Among different sources, radically different numbers on both ends of the spectrum can be cited. Part of the reason is that most "redemption rates" do not distinguish whether they are calculated as part of total sales or incremental sales. 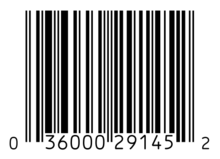 At some big box stores, personal computers are regularly sold with sizable rebates attached, making the advertised price more attractive to buyers. It is common, though, for these rebates to be conditional upon signing a long term contract with a particular ISP, to which some customers may object. Hardware manufacturers have come under fire, also. Dell, for one, has been the subject of rebate complaints involving misprinted receipts, potentially confusing expiration dates, and service representatives who are slow to react.

Rebate issues began to clog Dell's customer service forums, leading the company to shut down that portion of the website,[23] and refocus its energy on new online customer care solutions. CompUSA used rebates regularly until it started closing its remaining stores in December 2007.

Cell phone service companies, including major players like T-Mobile, as well as third-party retailers like Radio Shack, Wirefly and others have received growing attention due to complex rebate redemption rules. Both carriers and retailers make customers submit rebate claims during a 30-day window, often 6 months after cell phone activation.[24] Some authorized dealers have responded by trying to make rebate requirements more transparent, explaining that the carrier will withdraw payment from them if a customer quits service before the end of the contract.

Rebates as a form of price discrimination

A common complaint against rebates is the claim that rebates can be used as a form of "price discrimination" against members of lower classes who are less likely to redeem rebates than a more educated middle class.[11] Sridhar Moorthy, marketing professor at the University of Toronto also advocates a “price discrimination” theory between “people who are price-sensitive and people who are not price-sensitive.”.[20] A different view, as taken by the BusinessWeek article, is that rebates can be viewed as a “tax on the disorganized” that is paid by those who do not submit their rebates as opposed to those who do.

Some retailers have taken a step forward with offering consumers new ways to submit their rebates easily over the Internet, completely or partially removing any mail-in requirements. Staples, Sears, Tiger Direct and Rite Aid currently offer an online submission option for all or some of the rebates they offer. These special rebates are usually identified as such and have instructions for full or partial online submissions. This is touted as a more accurate processing of the rebate, reducing the potential for human or mechanical error and in many cases eliminating the postage costs associated with traditional mail-in rebates, although some require the UPC or Proof Of Purchase to be mailed in. Most of these retailers still let consumers submit rebates by mail.

In 2006 OfficeMax stores announced that they were eliminating mail-in rebates from their sales promotion in favor of instant rebates for their sale prices. The decision came after a year of working with rebate vendors and manufacturers to improve the rebate process and receiving "overwhelmingly negative feedback" from their customers about their rebate program.[25]

Instead of checks, prepaid gift cards are being given by many stores. Merchants like these cards, as they cannot be redeemed for cash and must be spent. However, some states require that retailers redeem the card value for cash if it falls below a certain level, such as $5 in Washington state.[26] Many sales people are not aware of this and will deny giving the refund. Consumers must be careful of expiration dates and read the fine print.[27]

According to research from Parago, a leading consumer incentives and rebate provider, the typical American household that takes advantage of consumer rebates saves an average of $150 annually. More than $8 billion dollars were issued back to American households last year alone by rebate programs.[28]