Aelia Capitolina (Latin in full: Colonia Aelia Capitolina) was a city built by the emperor Hadrian, and occupied by a Roman colony, on the site of Jerusalem, which was in ruins since 70 AD, leading in part to the Bar Kokhba revolt of 132–136.

Jerusalem was still in ruins from the First Jewish-Roman War in 70 AD. Josephus, a contemporary, reports that "Jerusalem ... was so thoroughly razed to the ground by those that demolished it to its foundations, that nothing was left that could ever persuade visitors that it had once been a place of habitation."[1]

When the Roman Emperor Hadrian vowed to rebuild Jerusalem from the wreckage in 130 AD, he considered reconstructing Jerusalem as a gift for the Jewish people. The Jews awaited with hope, because Hadrian was considered a moderate. But after Hadrian visited Jerusalem, he decided to build Aelia Capitolina which would be inhabited by his legionnaires.[2] Hadrian also decided to never allow Jews to re-enter the city ever again. Jews, incensed at this harsh decree as well as by Hadrian's law forbidding circumcision, secretly started putting aside arms from the Roman munitions workshops; soon after, a revolt broke out under Simeon ben Kosiba. This Bar Kokhba revolt, which the Romans managed to suppress, enraged Hadrian, and he came to be determined to erase Judaism from the province; Iudaea province was renamed Syria Palaestina, and Jews were banned from entering the city, on pain of death, except on the day of Tisha B'Av. The Sanhedrin had earlier relocated to Jamnia. Hadrian's new plans included temples to the major regional deities, and certain Roman gods, in particular Jupiter Capitolinus; a great offense to the traditionalist monotheist Jews.

The Christian church in Jerusalem after 135

According to Eusebius, the Jerusalem church was scattered twice, in AD70 and AD135, with the difference that from 70-130 the bishops of Jerusalem have evidently Jewish names, whereas after 135 the bishops of Aelia Capitolina appear to be Greeks.[3] Eusebius' evidence for continuation of a church at Aelia Capitolina is confirmed by the Bordeaux Pilgrim.[4] The Pilgrim's reference is a basis for the Church of Zion, Jerusalem thesis of Bagatti (1976) and Testa, though the archeological evidence may suggest only a later Crusader church.[citation needed]

The Madaba Map depiction of 6th-century Jerusalem has the Cardo Maximus, the town’s main street, beginning at the northern gate, today's Damascus Gate, and traversing the city in a straight line from north to south to Nea Church.

Aelia came from Hadrian's nomen gentile, Aelius, while Capitolina meant that the new city was dedicated to Jupiter Capitolinus, to whom a temple was built on the site of the former Jewish temple, the Temple Mount.[5] The city was without walls, protected by a light garrison of the Tenth Legion, during the Late Roman Period. The detachment at Jerusalem, which apparently encamped all over the city’s western hill, was responsible for preventing Jews from returning to the city. Roman enforcement of this prohibition continued through the 4th century. The Latin name Aelia is the source of the Arabic term Iliyā' (إلياء), an early Islamic name for Jerusalem.

Plan of the city 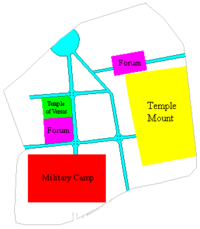 The two pairs of main roads - the cardines (north-south) and decumani (east-west) - in Aelia Capitolina.

The urban plan of Aelia Capitolina was that of a typical Roman town wherein main thoroughfares crisscrossed the urban grid lengthwise and widthwise.[6] The urban grid was based on the usual central north-south road (cardo) and central east-west route (decumanus). However, as the main cardo ran up the western hill, and the Temple Mount blocked the eastward route of the main decumanus, a second pair of main roads was added; the secondary cardo ran down the tyropoean valley, and the secondary decumanus ran just to the north of the temple mount. The main Hadrianic cardo terminated not far beyond its junction with the decumanus, where it reached the Roman garrison's encampment, but in the Byzantine era it was extended over the former camp to reach the southern walls of the city.

The two cardines converged near the Damascus Gate, and a semicircular piazza covered the remaining space; in the piazza a columnar monument was constructed, hence the traditional name for the gate - Bab el-Amud (Gate of the Column). Tetrapylon were constructed at the other junctions between the main roads.

This street pattern has been preserved through Jerusalem's later history; the western cardo is Suq Khan ez-Zeit (Olive-oil Inn Market), the southern decumanus is both the Street of the Chain and Suq el-Bazaar (Bazaar Market; called David Street by Israelis), the eastern cardo is Al-wad Road (Valley road), and the northern decumanus is now the Via Dolorosa. The original thoroughfare, flanked by rows of columns and shops, was about 73 feet (22 meters) wide (roughly the equivalent of a present-day six lane motorway), but buildings have extended onto the streets over the centuries, and the modern lanes replacing the ancient grid are now quite narrow. The substantial remains of the western cardo have now been exposed to view near the junction with Suq el-Bazaar, and remnants of one of the tetrapylon are preserved in the 19th century Franciscan chapel at the junction of the Via Dolorosa and Suq Khan ez-Zeit.

As was standard for new Roman cities, Hadrian placed the city's main Forum at the junction of the main cardo and decumanus, now the location for the (smaller) Muristan. Adjacent to the Forum, at the junction of the same cardo, and the other decumanus, Hadrian built a large temple to the goddess Venus, which later became the Church of the Holy Sepulchre; despite 11th century destruction, which resulted in the modern Church having a much smaller footprint, several boundary walls of Hadrian's temple have been found among the archaeological remains beneath the Church.[7] The Struthion Pool lay in the path of the northern decumanus, so Hadrian placed vaulting over it, added a large pavement on top, and turned it into a secondary Forum;[8] the pavement can still be seen under the Convent of the Sisters of Zion.[8]