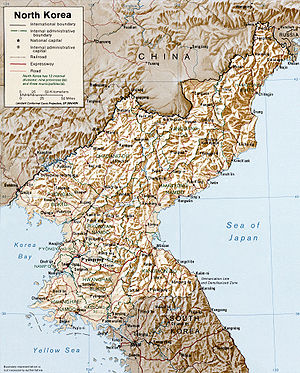 North Korea is located in east Asia on the northern half of the Korean Peninsula. North Korea shares a border with three states, including China along the Amnok River, Russia along the Duman River, and South Korea along the Korean Demilitarized Zone (DMZ). The Yellow Sea and the Korea Bay are off the west coast and the Sea of Japan (East Sea of Korea) is off the east coast.

The Korean Peninsula extends about 1000 km southward from the northeast Asian continental landmass. The 8460-km coastline of Korea is highly irregular, and North Korea accounts for 2495 km of this, roughly half. Some 3579 islands lie adjacent to the Korean Peninsula, mostly along the south and west coasts.

Waters of the Yellow Sea are demarcated between North Korea and South Korea by the disputed Northern Limit Line drawn by the United Nations Command (Korea) in early 1950s and not officially recognized by North Korea. 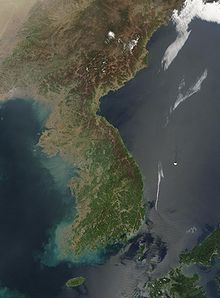 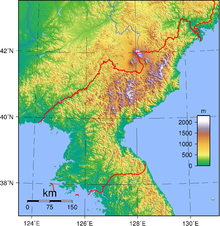 The terrain consists mostly of hills and mountains separated by deep, narrow valleys. The coastal plains are wide in the west and discontinuous in the east.

Early European visitors to Korea remarked that the country resembled "a sea in a heavy gale" because of the many successive mountain ranges that crisscross the peninsula. Some 80 percent of North Korea's land area is composed of mountains and uplands, with all of the peninsula's mountains with elevations of 2000 m or more located in North Korea. The great majority of the population lives in the plains and lowlands.

Baekdu Mountain, the highest point in North Korea, is a volcanic mountain near the Chinese border with basalt lava plateau with elevations between 1400 and 2000 m above sea level. The Hamgyeong Range, located in the extreme northeastern part of the peninsula, has many high peaks, including Mt. Gwanmosan at approximately 1756 m.

Other major ranges include the Rangrim Mountains, which are located in the north-central part of North Korea and run in a north-south direction, making communication between the eastern and western parts of the country rather difficult; and the Kangnam Range, which runs along the North Korea–China border. Geumgangsan, often written Mt Kumgang, or Diamond Mountain, (approximately 1,638 m) in the Taebaek Range, which extends into South Korea, is famous for its scenic beauty.

For the most part, the plains are small. The most extensive are the Pyeongyang and Chaeryŏng plains, each covering about 500 km2. Because the mountains on the east coast drop abruptly to the sea, the plains are even smaller there than on the west coast.

The mountain ranges in the northern and eastern parts of North Korea form the watershed for most of its rivers, which run in a westerly direction and empty into the Yellow Sea and Korea Bay. The longest is the Amnok River, which is navigable for 678 of its 790 km. The Duman River, one of the few major rivers to flow into the Sea of Japan, is the second longest at 521 kilometers but is navigable for only 85 kilometers because of the mountainous topography.

The third longest river, the Daedong River, flows through Pyeongyang and is navigable for 245 of its 397 km. Lakes tend to be small because of the lack of glacial activity and the stability of the Earth's crust in the region. Unlike neighboring Japan or northern China, North Korea experiences few severe earthquakes. The country is well-endowed with spas and hot springs, which number 124 according to one North Korean source. 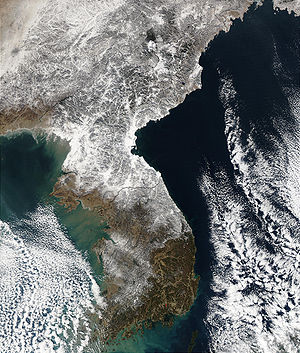 Located between 38 and 43° N, North Korea has a continental climate with four distinct seasons. Long winters bring bitter cold and clear weather interspersed with snow storms as a result of northern and northwestern winds that blow from Siberia. The daily average high and low temperatures for P'yongyang in January are -3 and -13 °C (27 and 9 °F). On average, it snows thirty-seven days during the winter. Winter can be particularly harsh in the northern, mountainous regions. Summer tends to be short, hot, humid, and rainy because of the southern and southeastern monsoon winds that bring moist air from the Pacific Ocean.

The daily average high and low temperatures for Pyongyang in August are 29 and 20 °C (84 and 68 °F). On average, approximately 60% of all precipitation occurs from June to September. Typhoons affect the peninsula on an average of at least once every summer. Spring and autumn are transitional seasons marked by mild temperatures and variable winds and bring the most pleasant weather.

Natural hazards include late spring droughts which often are followed by severe flooding. There are occasional typhoons during the early fall.

Lack of information makes it difficult to assess the extent to which industrialization and urbanization have damaged North Korea's natural environment. Using generally obsolete technology transferred from the former Soviet Union and the People's Republic of China, the country embarked on a program of ambitious industrialization after the Korean War.

Air pollution is moderated by the extensive reliance on electricity rather than on fossil fuels, both for industry and the heating of urban residences. Air pollution is further limited by the absence of private automobiles and restrictions on using gasoline-powered vehicles because of the critical shortage of petroleum.

Significant deforestation since the 1990s, due to timber and firewood harvesting, drought, and clearing of farmland. Degradation of farmland due to deforestation has been blamed as a contributing factor in declining crop yields.[1]