The Mari Lwyd (Grey Mare or "Gray Mary" in English), also Y Fari Lwyd,[1] is a Welsh midwinter tradition, possibly to celebrate New Year (see Calennig), although it formerly took place over a period stretching from Christmas to late January.[2] It is a form of visiting wassail, a luck-bringing ritual in which a the participants accompany a person disguised as a horse from house to house (including pubs) and sing at each door in the hope of gaining admittance and being rewarded with food and drink.[2]

Perhaps deriving from an ancient rite for the Celtic goddess Rhiannon,[citation needed] the Mari Lwyd was once widespread throughout Wales,[2] but is now associated with the south and south-east of the country, in particular Glamorgan and Gwent.[2][3] The rise of the chapel movement in Wales during the Industrial Revolution started the demise of the tradition, as it had started to gain a reputation for drunkenness and the pagan connotations were being protested by the church.[1][4] The influence of the church helped to change the form of the custom in some places, with Christmas carols being added to the singers' repertoire.[1][5] The tradition started fading through the first half of the twentieth century and had pretty much become extinct during the Second World War. Nowadays, some folk associations in Llantrisant,[1] Llangynwyd, Cowbridge and elsewhere are trying to revive it.

The Mari Lwyd consists of a mare's skull (sometimes made of wood, or when the custom is followed by children, cardboard) fixed to the end of a wooden pole; a white sheet is fastened to the back of the skull, concealing the pole and the person carrying the Mari. Two black cloth ears may be sewn onto the cloth.[2] The eye sockets are often filled with green bottle-ends, or other coloured material. The lower jaw is sometimes spring-loaded, so that the Mari's 'operator' can snap it at passers-by or householders.[2] Coloured ribbons are usually fixed to the skull and small bells attached to the reins (if any) by which the Mari is led.

The Mari party (five or six men or boys) often had coloured ribbons and rosettes attached to their clothes, and sometimes wore a broad sash around the waist.[2] There was usually a "Leader", smartly dressed, who carried a staff or stick, or a whip, and sometimes other stock characters, such as the Merryman, who played music, and Punch and Judy (both played by men) with blackened faces; often brightly dressed, Punch carried a long metal poker and Judy had a besom broom.[3]

The custom used to begin at dusk and often lasted late into the night.[2] Now it may start earlier in the day (as at Llangynwyd, where it begins at 2pm on New Year's Day).[4]

During the ceremony, the skull is carried through the streets of the village by the party; they stand in front of every house to sing traditional songs. The singing sometimes consists of a rhyme contest (pwnco or pwngco)[3] between the Mari party and the inhabitants of the house, who challenge each other with improvised verses (traditionally exchanged through the closed door); the contest could last for some time, until one side gave up.[2][4] (At some places, such as Llantrisant, the pwnco was not used, or has been abandoned, and only the introductory verses were sung, followed by carols.[5]) Punch and Judy, if present, were troublesome characters; Punch tapped on the ground in time to the music and rapped on the door with his poker. Judy would brush the ground, the house walls, even the windows, and would chase anyone unwise enough to get too close and brush them too. Traditionally, if the Mari side lost the contest, they would have to leave without being admitted to the house or pub, but this was probably a very rare occurrence, as the party's entry into the building brought good luck, so they would usually win (or be allowed to win).[2] Alternatively, they might sing a verse begging admittance.[3]

Once inside, the entertainment continued with the Mari running around neighing and snapping its jaws, creating havoc, frightening children and (perhaps even adults) while the Leader pretended to try to restrain it. The Merryman played music and entertained the householders.[2] Punch and Judy, if present, also had parts to play: Punch would kiss the girls and be chased by Judy with her broom. At Nantgarw, Punch would use his poker to rake out the grate, putting out the fire, unless a promise to leave it alone had previously been forced out of the Mari party during the pwnco. Judy also used her broom to "brush" the house floors, but sometimes scattered the ashes and made a mess (at Nantgarw this unruliness led to a Mari party being refused admittance to a house the following year, even though they were not the same people).[3] Normally, though, the tomfoolery was lighthearted; the participants would be rewarded with cakes and ale, and sometimes received a gift of money as well. The visit concluded with a traditional farewell song.[6]

In "those parts of Wales" (Roberts was probably referring to Pembrokeshire), on All Hallows' Eve, a horse's head was made of canvas, stuffed with hay and painted. Mounted on a hay fork, the prongs of which were covered in leather to represent the horse's ears, the fork was manipulated by someone under the canvas "who guides the movements of the head as he wishes." Roberts (1897) says the custom is called Bwca Llwyd has been translated as "grey bogy".

Another description published in 1919 by H.W. Evans of a similarly constructed animal, extant at Solva in Pembrokeshire c.1840, is quoted by Cawte with a reproduction of Evans' drawing of the creature. It had gloves for ears and buttons for its eyes. Evans described it as "the Mari Lwyd of our district" but Cawte, who had no other records of the name or custom in Pembrokeshire, felt that he used the term Mari Lwyd "merely to indicate an animal disguise."[3] Since the publication of Cawte's book, however, more records of Mari Lwyd have come to light.[4] 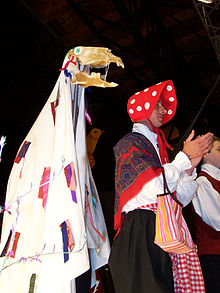 A Mari Lwyd, during a celebration

The Mari Lwyd has become associated with a resurgent awareness of Welsh folk culture. For example, the town council of Aberystwyth (in Ceredigion, well outside the Mari Lwyd's traditional area) organised "The World's Largest Mari Lwyd" for the Millennium celebrations in 2000.[citation needed]

A Mari Lwyd performance can be seen every December at the St Fagans National History Museum.

A mixture of the Mari Lwyd and Wassail customs occurs in the border town of Chepstow, South Wales, every January. A band of English Wassailers meet with the local Welsh Border Morris Side, The Widders, on the bridge in Chepstow. They greet each other and exchange flags in a gesture of friendship and unity and celebrate the occasion with dance and song before performing the "pwnco" on the steps of Chepstow Museum.[8]

In north Wales on the first of May the skull of a donkey or horse was put over a woman's door instead of a bunch of flowers to show disapproval.[3]

A horse's head, prepared as for the Mari Lwyd, was part of a spring festival in Pembrokeshire, known around 1820. Young men and women gathered at a mill for a night's entertainment with "dialogues and every kind of merriment".[3]