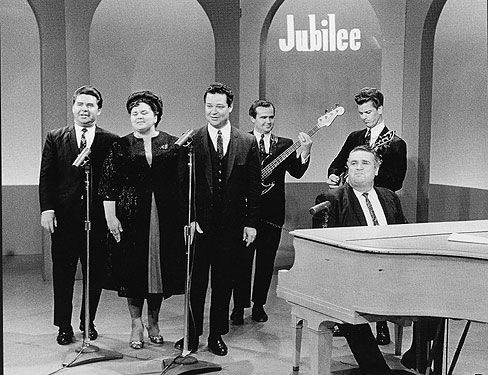 The Happy Goodman Family was a group founded in the 1940s by Howard "Happy" Goodman.

The Happy Goodman Family began to be known for their singing around 1950. During the 1940s and 1950s there were various combinations of all eight brothers and sisters, with Howard being constant. Brother Sam pulled a stint in the Air Force while Brother Bobby was a truck driver and played for some rock and roll bands. Brother Rusty pulled a stint in service as well as singing with the Plainsmen Quartet afterwards. Howard married, and soon his wife Vestal joined the group as well. After all the sisters married, Howard and Vestal went into evangelistic work. Soon Sam joined them again followed by Rusty in 1962 and Bobby on bass guitar not long afterwards.

The fame of the Happy Goodmans grew considerably in the early-1960s. Appearances at the National Quartet Convention got them in front of promoters who in turn booked them across the country. In 1964, they were asked to become one of the flagship groups for a new Southern Gospel program called The Gospel Singing Jubilee along with The Florida Boys, Dixie Echoes, and The Couriers. This program soon became one of the most popular gospel music programs and would run for over twenty years. The Goodmans would soon become one of the most popular groups on the program, and would remain so for ten years till they left to start their own TV program the Happy Goodman Family Hour. The weekly TV exposure allowed The Happy Goodman Family to take the nation by storm. They quickly became America's favorite singing family.

Their first full length recording was I’m Too Near Home, initially released in 1963 and later re-released on Canaan/Word in 1965. In 1968, they were honored with a Grammy award for their 1967 album The Happy Gospel of the Happy Goodmans. Ten years later, they received another Grammy for Refreshing.

The Goodmans had a list of hit songs a mile wide. Many of the songs they introduced to gospel music are now considered classics. Songs such as I Wouldn't Take Nothing For My Journey Now, Who Am I, God Walks The Dark Hills, Had It Not Been, What A Beautiful Day For The Lord To Come Again, and many others will forever be part of gospel music and synonymous with the Happy Goodman Family.

The Goodmans broke new ground in gospel music during the 1960s and 1970s by implementing a live band and creating their own unique sound. It was during these years that they developed their now classic "grab a note and hang on" endings. Sam's humorous emcee work, Howard's showmanship at the piano, Rusty's songwriting, and Vestal's hairdos,white handkerchiefs, and poweful singing voice all rose to a new prominence. Tenor Johnny Cook joined the group for a while in 1974 and Rusty's daughter Tanya was added in 1976.

Around 1980, creative differences about musical style caused a division in the family. The musical landscape of Christian music was expanding considerably at this time, and Howard and Vestal wanted to maintain their traditional sound. Rusty, Sam, and Tanya wanted to take the group in a more contemporary direction. Ultimately, Howard and Vestal decided to leave the group. making what would become one of their best albums. Rusty, Sam, and Tanya carried on with Johnny Cook returning at tenor. Michael English joined them a couple of years later singing lead. Michael left his family group "THE SINGING SAMARITANS" his brother Biney sang bass, his dad Albine sang baritone, and Vernon Adams sang Lead and played the Piano.

Mike would soon leave The Goodman's to return to sing with his family.

Aside from a one time performance at the 1984 National Quartet Convention by Sam, Rusty, Howard and Vestal, the Happy Goodmans did not sing together from 1984 to 1990. In 1990, news that Rusty had been diagnosed with cancer prompted the family to record a project together called The Reunion. Although they initially planned to tour in support of the project, Rusty's health deteriorated rapidly. He died in November 1990. Sam followed his brother in death the next year.

In 1996, Howard and Vestal were joined on vocals by former Happy Goodman band member Johnny Minick. As a trio, they brought back the Happy Goodman name to the delight of fans. Several projects were released over the next five years and they were regular fixtures at Gaither Homecoming events. Their last project was appropriately titled The Final Stand (2001). In 2002, a biographical video titled More Than The Music...Life Story chronicled the history of the Happy Goodmans. Vestal wrote her autobiography and released a number of solo projects before her death in 2003, including two Vestal and Friends CDs featuring duets with a diverse array of vocalists.

The group recorded 15 number-one singles and played over 3,500 shows. They were inducted into the in 1998.