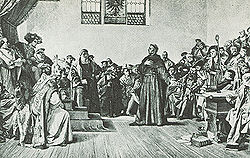 "Luther at the Diet of Worms"

The Diet of Worms 1521 (German: Reichstag zu Worms, [ˈʁaɪçstaːk tsuː ˈvɔɐms]) was a diet (a formal deliberative assembly, specifically an Imperial Diet) that took place in Worms, Germany, and is most memorable for the Edict of Worms (Wormser Edikt), which addressed Martin Luther and the effects of the Protestant Reformation. It was conducted from 28 January to 25 May 1521, with Emperor Charles V presiding.

The previous year, 1521, Pope Leo X issued the Papal bull Exsurge Domine ("Arise, O Lord"), outlining 41 purported errors found in Martin Luther's 95 theses and other writings related to or written by him. Luther was summoned by the emperor. Prince Frederick III, Elector of Saxony obtained an agreement that if Luther appeared he would be promised safe passage to and from the meeting. This guarantee was essential after the treatment of Jan Hus, who was tried and executed at the Council of Constance in 1415 despite a promise of safe conduct.

Emperor Charles V commenced the Imperial Diet of Worms on 28 January 1521. Luther was summoned to renounce or reaffirm his views. When he appeared before the assembly on 16 April, Johann Eck, an assistant of the Archbishop of Trier (Richard Greiffenklau zu Vollraths at that time), acted as spokesman for the emperor.

The Edict of Worms was a decree issued on 25 May 1521 by Emperor Charles V, declaring:

For this reason we forbid anyone from this time forward to dare, either by words or by deeds, to receive, defend, sustain, or favor the said Martin Luther. On the contrary, we want him to be apprehended and punished as a notorious heretic, as he deserves, to be brought personally before us, or to be securely guarded until those who have captured him inform us, where upon we will order the appropriate manner of proceeding against the said Luther. Those who will help in his capture will be rewarded generously for their good work.

The Papal nuncio at the diet, Girolamo Aleandro, drew up and proposed the denunciations of Luther that were embodied in the Edict of Worms, promulgated on 25 May. The Edict declared Luther to be an obstinate heretic and banned the reading or possession of his writings.

It was the culmination of an ongoing struggle between Martin Luther and the Catholic Church over reform, especially in practice of donations for indulgences. However, there were other deeper issues that revolved around both theological concerns:

To protect the authority of the Pope and the Church, as well as to maintain the doctrine of indulgences, ecclesiastical officials convinced Charles V that Luther was a threat and persuaded him to authorize his condemnation by the Holy Roman Empire. Luther escaped arrest and remained in seclusion at Wartburg castle for several years where he continued to write and translate the New Testament into German.

While the Edict was harsh, Charles was so preoccupied with political and military concerns elsewhere that it was never enforced. Eventually Luther was allowed to return to public life and became instrumental in laying the groundwork for the Protestant Reformation.

Despite the agreement that he could return home safely, it was privately understood that Luther would soon be arrested and punished. To protect him from this fate, Prince Frederick seized him on his way home and hid him in Wartburg Castle. It was during his time in Wartburg that Luther began his German translation of the Bible. Martin Luther's powerful testimony of faith at the Diet of Worms in 1521 made an indelible impression upon the mind of George, Margrave of Brandenburg-Ansbach, who turned his eyes to the new faith earlier than any other German prince or any other member of the House of Hohenzollern. Moreover, Luther entered into correspondence with him, discussing with him the most important problems of faith. The edict was temporarily suspended at the Diet of Speyer of 1526 but then reinstated in 1529.

When Luther eventually reemerged from the Wartburg, the emperor, distracted with other matters, did not press for Luther's arrest. Ultimately, because of rising public support for Luther among the German people and the protection of certain German princes, the Edict of Worms was never enforced in Germany. However, in the Low Countries (comprising modern-day Belgium, Luxembourg, and the Netherlands), the Edict was initially enforced against Luther's most active supporters. This could be done because these countries were under the direct reign of the Emperor Charles V himself. In December, 1521, Jacob Probst, prior of the Augustinian monastery in Antwerp, was the first Luther-supporter to be prosecuted under the terms of the Worms Edict. In February 1522, Probst was compelled to make public recantation and repudiation of Luther's teachings. Later that year, additional arrests were made among the Augustinians in Antwerp. Two monks, Johannes van Esschen and Keneth Milar, refused to recant and so on 1 July 1523, they were burned at the stake in Brussels.