Chittranjan Locomotive Works ( Bengali: চিত্তরঞ্জন লোকোমোটিভ ওয়ার্কস ) is an electric locomotive manufacturer based in India, one of the largest manufacturers in the world. 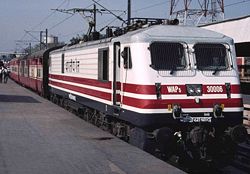 Founded in 1947 the company is named after the Indian freedom-fighter Chittaranjan Das. The manufacturing unit was established at a place close to the [[Mihijam|Mihijam railway station in Barddhaman district], in the state of West Bengal. The 18.34 km2 township, which included a factory, 191 km. of roadways, 43 schools, 9,131 staff quarters, 8 clinics (including a 200 bed hospital) and 7 markets, was built at a cost of Rs. 140 million and had a population of over 80,000. The factory commenced the production of steam locomotives on the 26 January 1950 (the date when India formally declared itself a Republic), in collaboration with the North British Locomotive Company. On November 1, 1950 Indian President Dr. Rajendra Prasad formally dedicated the first steam rail-engine produced by the company (a WG class locomotive bearing the registration number 8401) to the freedom fighter Deshbandhu Chittranjan Das. The name of the nearby railway station Mihijam was also changed to Chittaranjan. Post-1968 the factory began to manufacture diesel-hydraulic locomotives. The production of steam and diesel locomotives were discontinued in 1973 and 1994 respectively. The company has since been manufacturing only electric rail-engines. It is now the only government electric loco producing factory in India.The factory obtains its iron & steel from Asansol and Jamshedpur and hydel power from Maithon Dam. The township under CLW i.e. Chittaranjan is bordered by high boundaries and 3 main gates, and guarded by Railway Protection Force(RPF), Railway Protection Special Force(RPSF) and also West Bengal police. 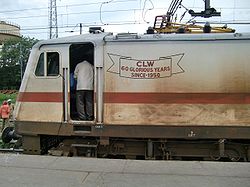