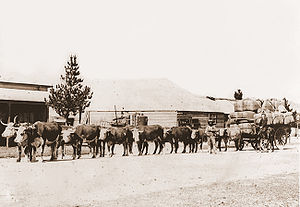 A working animal is an animal, usually domesticated, that is kept by humans and trained to perform tasks. They may be close members of the family, such as guide or service dogs, or they may be animals trained strictly to perform a job, such as logging elephants. They may also be used for milk, a job that requires human training to encourage the animal to cooperate. Some, at the end of their working lives, may also be used for meat or other products such as leather. Such animals are sometimes called draft animals or beasts of burden.

The history of working animals may predate agriculture, with dogs used by our hunter-gatherer ancestors. Around the world, millions of animals work in relationship with their owners. Domesticated species are often bred to be suitable for different uses and conditions, especially horses and working dogs. Working animals are usually raised on farms, though some are still captured from the wild, such as dolphins and some Asian elephants.

People have found uses for a wide variety of abilities found in animals and even in industrialized society many animals are still used for work. The strength of horses, elephants and oxen is used in pulling carts and logs. The keen sense of smell of dogs and, sometimes, rats are used to search for drugs and explosives as well helping to find game while hunting and to search for missing or trapped people. Several animals including camels, donkeys, horses and dogs are used for transport, either riding or to pull wagons and sleds. Other animals including dogs and monkeys provide assistance to blind or disabled people.

On rare occasions, wild animals may be not only tamed, but trained to perform work, though often solely for novelty or entertainment purposes, as such animals tend to lack the traits of trustworthiness and mild temper that characterize the true domesticated working animal. Conversely, not all domesticated animals are working animals. For example, while cats may perform work catching mice, it is an instinctive behavior, not one that can be trained by human intervention. Other domesticated animals, such as sheep, or rabbits, may have agricultural uses for meat, hides and wool, but are not suitable for work. Finally, small domestic pets such as most birds (other than certain types of pigeon) or hamsters are generally incapable of performing work other than that of providing simple companionship.

The horse-drawn winch of a former limestone quarry (France)

Some animals are used due to sheer physical strength in tasks such as ploughing or logging. Such animals are grouped as a draught or draft animal. Others may be used as pack animals, for animal-powered transport, the movement of people and goods. People ride some animals directly as mounts, use them as harness one or a team to pull vehicles.

They include equines such as horses, ponies, donkeys, and mules; elephants; yaks; and camels. Dromedary camels in arid areas of Australia, North Africa and the Middle East; the less common Bactrian camel inhabits central and East Asia; both are used as working animals. On occasion, reindeer, though usually driven, may be ridden.

Certain wild animals have been tamed and used for riding, usually for novelty purposes, including the zebra and the ostrich. Some mythical creatures are believed to act as divine mounts, such as garuda in Hinduism and the winged horse Pegasus in Greek mythology. 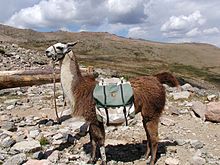 Pack animals may be of the same species as mounts or harness animals, though animals such as horses, mules, donkeys, reindeer and both types of camel may have individual bloodlines or breeds that have been selectively bred for packing. Additional species are only used to carry loads, including llamas in the Andes.

Domesticated oxen, bullocks, and yaks are also used as pack animals. Other species used to carry cargo include dogs and pack goats. 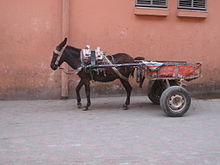 Mule used to pull a wheeled vehicle in Morocco

An intermediate use is to harness animals, singly or in teams, to pull (or haul) sleds, wheeled vehicles or plough.

Assorted wild animals have, on occasion, been tamed and trained to harness, including zebras and even moose.

Animals used for their senses or instincts 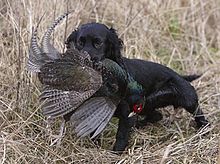 A dog working as a retriever

As predatory species are naturally equipped to catch prey, this is a further use for animals and birds. This can be done either for sustenance or sport, to reduce the population of undesired animals (pests) that are considered harmful to crops, livestock or the environment. 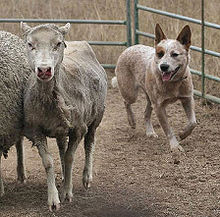 The defensive and offensive capabilities of animals (such as fangs and claws) can be used to protect or to attack humans.