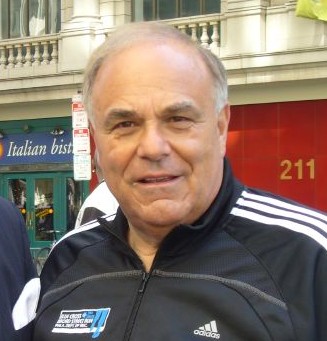 Edward Gene "Ed" Rendell (born ) is an American politician and member of the Democratic Party. He was elected Governor of the Commonwealth of in 2002, and his term of office began , . He is currently a Member of the Executive Committee, and also served as General Chairman of the during the 2000 presidential election. In July 2008, Governor Rendell was also elected as the Chairman of the . He currently serves on the Board of Trustees of the [ [http://www.constitutioncenter.org National Constitution Center: Home ] ] in Philadelphia, a museum dedicated to the U.S. Constitution. He is married to , a for the .

Rendell was born in to parents Jesse T. Rendell and Emma Sloat; all four of his grandparents were immigrants from . [ [http://www.wargs.com/political/rendell.html Ancestry of Ed Rendell ] ] He received a degree from the in 1965 and a from Villanova Law School in 1968. At the he was a member of the fraternity. He served as a in the from 1968 to 1974.

Rendell was elected of Philadelphia in 1977, defeating the incumbent Democratic DA, F. Emmett Fitzpatrick, in the . Rendell ran a campaign that emphasized that he was new to the political scene and not tainted by corruption. In 1980, Rendell received 28 delegate votes for [ [http://www.ourcampaigns.com/RaceDetail.html?RaceID=59872 Our Campaigns - US Vice President - D Convention Race - Aug 11, 1980 ] ] at the Democratic National Convention, although he was not a candidate. He served two terms as DA before leaving in 1986 to run for Governor of Pennsylvania. He was defeated in the Democratic gubernatorial primary by Robert P. Casey, Sr.

The 1985 police confrontation and bombing of , an commune, occurred during Rendell's tenure as District Attorney.

In 1987, Rendell ran for the Democratic nomination against the incumbent mayor, and lost. Rendell ran successfully four years later, in 1991. His opponent was Democrat-turned-Republican former Philadelphia Mayor, . Rizzo, however, died in the summer of 1991; in November 1991, Rendell won by more than a 2-1 margin against Joseph M. Egan, Jr., Rizzo's replacement on the Republican ticket. [ [http://www.citypaper.net/articles/101295/article009.shtml Dead Men Can Vote ] ]

As mayor, Rendell inherited massive fiscal problems. The state legislature established a fiscal oversight board to monitor the City of Philadelphia's fiscal issues. During his career as mayor, Rendell cut a $250 million deficit; balanced Philadelphia's budget and oversaw five consecutive years of budget surpluses; reduced business and wage taxes for four consecutive years; implemented new revenue-generating initiatives, and dramatically improved services to Philadelphia neighborhoods. He also appointed Philadelphia's first ever Latino deputy mayors, with the naming of Benjamin Ramos and Manuel Ortiz. Rendell's cost-cutting policies brought him strong opposition from labor unions; however, he was re-elected in 1995, defeating Republican with 80% of the vote. He resigned on , 1999, shortly before the end of his term, to take up the chairmanship of the (DNC), and former chairman (and mayor elect) John Street became mayor three weeks early.

Rendell's first term as mayor was chronicled in a best-selling book "A Prayer for the City" by . The author, a former journalist, was given practically unlimited access to the Mayor during that term. The "" called Rendell's job as mayor as "the most stunning turnaround in recent urban history." [ [http://www.democraticgovernors.org/governors/373/governor-edward-g-rendell Democratic Governors Association: Governor Edward G. Rendell ] ] Rendell was nicknamed "America's Mayor" by and chaired the DNC during the 2000 presidential election.

When he announced his intent to run for the Democratic Nomination for Governor of Pennsylvania, he did so without the backing of the state party. The Pennsylvania Democratic Party threw their support behind Bob Casey whom they saw as a more electable candidate against the liberal Rendell. In a bitter primary, Rendell won the nomination by winning only 10 out of 67 counties: Philadelphia and its suburbs: Bucks, Chester, Montgomery, and Delaware, its Lehigh Valley exurbs: Berks, Lehigh and Northampton, and Centre County, the home of Penn State University. [ [http://www.electionreturns.state.pa.us/ElectionsInformation.aspx?FunctionID=15&ElectionID=6&OfficeID=3 Commonwealth of PA - Elections Information ] ] In the November 2002 gubernatorial election, he defeated Mike Fisher (R) 53% to 44%.

The first piece of legislation Rendell initiated was "The Plan for a New Pennsylvania". [http://www.pahouse.com/budget2003PART2/index.asp] The Plan proposed using revenue to reduce taxes by $1.5 billion (an average 30% decrease for homeowners) and included $687 million in increased education funding. The plan was to be paid for with a proposed income tax increase from 2.80% to 3.75% plus increased taxes on utilities and beer. The governor's plan passed but with a smaller tax increase to only 3.07% and increased education funding of $450 million. The final budget deal included additional taxes on cigarettes and utilities. [ [http://www.state.pa.us/papower/cwp/view.asp?A=11&Q=435949 PA Login: GOVERNOR EDWARD G. RENDELL PRAISES HOUSE FOR COMPLETING FISCAL YEAR 2003-04 BUDGET ] ]

In his first year, Rendell created the Office of Management and Productivity with the goal of cutting $1 billion in administrative expenses by the end of his first term. One of the most widely touted successes from Rendell's productivity initiative was in which he overhauled the Commonwealth's antiquated procurement system, leading to $180 million in annual savings [http://www.governor.state.pa.us/governor/cwp/view.asp?a=3&q=437328] and a quadrupling of Pennsylvania's minority and women owned business participation rate.

In 2004, Rendell persuaded the to pass measures to legalize and tax slot machine parlors, with the revenues from these measures to be used to reduce property taxes. Prior to this legislation, the only legal forms of in Pennsylvania were and the state-run lottery. Rendell has been criticized by many opponents of legalized gambling. [ [http://www.casinofreephila.org Welcome | Casino-Free Philadelphia ] ]

In a compromise with the legislature, Rendell accepted a provision requiring that tax reductions only occur in areas where local school boards voted to accept the funding. Act 72 funding, as it came to be known, was accepted by only one fifth of Pennsylvania's school districts. Rendell was criticized when he commented that PA voters were "misguided" when the overwhelming majority of Pennsylvanians voted against Act 72 in their districts.

Following Act 72, Rendell and the Pennsylvania legislature are looking at other proposals to reduce es, a key component of his 2002 campaign. The governor has said he is willing to consider legislation that changes Act 72. Legislative proposals have been made to force school districts to accept the money. Other proposed legislation would require the issue to be voted on in each district as a ballot question, rather than decided by school boards. Property tax relief and Act 72 are issues of great controversy and have been subject to political gridlock, so it is unclear when changes will be made or what is likely to happen next.

In 2005, Rendell received much criticism from the public and press for signing a controversial pay raise for legislators. Later, he signed the measure's repeal. In 2007, as a residual effect of the potent political power the pay raise issue had in central and western Pennsylvania, Rendell stepped up criticism of the Pennsylvania Higher Education Assistance Agency (PHEAA) and its executive salaries and expenses, following published newspaper reports, in an effort to leverage PHEAA's profits from federal student loan revenues to help finance the Commonwealh's need-based state grant program for undergraduate post-secondary education (both for grants and for the administration of the program). PHEAA, however, is not a direct state government department, created as a quasi-governmental agency in the 1960s by the Pennsylvania General Assembly and which is governed by a Board comprised primarily of members of the Pennsylvania House of Representatives and Senate.

Rendell was a key initial supporter of the successful 2006 Democratic US Senate candidate Bob Casey Jr., who had run against him for the Democratic nomination for Governor in 2002.

Governor Rendell, a supporter [ [http://www.issues2000.org/Governor/Ed_Rendell_Crime.htm Ed Rendell on Crime ] ] , has signed 78 s during his term [ [http://www.cor.state.pa.us/portal/lib/portal/Warrants_by_Governor.pdf Execution Warrants Issued by Governor (1985 to Present) ] ] , but none of them were enforced due to stays.

Rendell was a potential candidate to serve as Senator 's running mate in the 2004 Presidential campaign. Rendell's popularity, particularly in the suburban ring of counties around Philadelphia, was a key to Kerry's victory in Pennsylvania, one of the most hotly contested "s" in the 2004 presidential election.

Rendell won re-election on November 7, 2006. [ [http://www.cnn.com/ELECTION/2006/pages/results/states/PA/G/00/index.html CNN.com - Elections 2006 ] ] . His Republican opponent in November was , a former professional football player for the .

Rendell was sworn into his second term as governor of Pennsylvania on January 16, 2007.

Ed Rendell recently denied interest in running for Vice President in 2008, saying "I like to be my own boss." [ [http://newsmax.com/archives/ic/2007/2/26/73248.shtml?s=ic Govs. Rick Perry, Ed Rendell: No V.P. Interest ] ] On , , Rendell appeared on "" and dismissed any speculation that he might run for the presidency or the vice presidency and outright denied any wish to be the vice-presidential running mate of the eventual Democratic nominee. On 's "", host has repeatedly compared former mayor and former 2008 Republican presidential candidate 's overtly successful mayoral tenure in NYC to Rendell's largely successful run as Philadelphia's mayor. Both Giuliani and Rendell have previously been dubbed "America's Mayor."

On August 30, 2007, "" reported that while Hillary Clinton and other high-profile Democratic politicians were returning contributions from tainted political fundraiser , Rendell said he intended to keep the $40,000 he had received from Hsu's fund-raising network. The newspaper also noted that last year Hsu hosted a 10-course dinner for Rendell at Per Se in New York City, where meals cost $250 per person.

On , , Rendell announced his endorsement of Senator Clinton in the latter's race for the White House [Pittsburgh Tribune-Review. [http://www.pittsburghlive.com/x/pittsburghtrib/news/cityregion/s_549028.html Clinton receives Rendell backing] , ] . He stated that, " [Hillary] really cares about moving this country forward. She also has the best health-care plan for America."

As one of Hillary Clinton's staunchest supporters, Rendell has argued that most media outlets coverage of her campaign have been biased. On March 31st, 2008 he congratulated Fox News on what he considered to be the best campaign coverage. Addressing "Fox & Friends" host Steve Doocy, he said, "I think during this entire primary coverage, starting in Iowa and up to the present, Fox has done the fairest job, has remained the most objective of all the cable networks." Rendell continued, "You actually have done a very balanced job of reporting the news, and some of the other stations are just caught up with Senator Obama, who is a great guy, but Senator Obama can do no wrong, and Senator Clinton can do no right." [ [http://www.huffingtonpost.com/2008/03/31/clinton-surrogate-ed-rend_n_94280.html Clinton Surrogate Ed Rendell Praises Fox News For "Most Objective," "Balanced" Coverage - Media on The Huffington Post ] ]

As state governor, Rendell is one of the 768 s to the Democratic National Committee.

Rendell's love of sports is well-known. Rendell is a fan and in a role that has caused some controversy among those who feel he should be solely concentrating on his gubernatorial duties, Rendell is part of the panel on the show "Post Game Live", which airs after every Eagles regular and post-season game. He even made a friendly wager on the outcome of , promising to wear a jersey and sing the National Anthem at a / game if the Eagles lost, which they did. In 2006, he won a bet with the , in supporting the in their quest to win over the Seahawks 21 - 10.

As a graduate of the University of Pennsylvania, Rendell frequently supports the Penn basketball team and can be seen at games at the .

He has also assisted in finding new corporate sponsorship for , a 21-year-old Philadelphia bicycle race.