The Five
For other uses, see 5 (disambiguation).

The Five, also known as The Mighty Handful or The Mighty Coterie (Russian: Могучая кучка, Moguchaya kuchka), refers to a circle of composers who met in Saint Petersburg, Russia, in the years 1856–1870: Mily Balakirev (the leader), César Cui, Modest Mussorgsky, Nikolai Rimsky-Korsakov and Alexander Borodin. The group had the aim of producing a specifically Russian kind of art music, rather than one that imitated older European music or relied on European-style conservatory training. In a sense, they were a branch of the Romantic Nationalist movement in Russia, sharing similar artistic goals with the Abramtsevo Colony and Russian Revival. 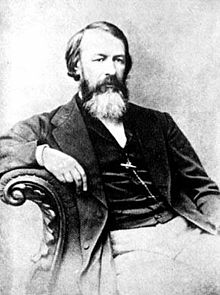 In May 1867 the critic Vladimir Stasov wrote an article, Mr. Balakirev's Slavic Concert, on a concert given for visiting Slav delegations to the "All-Russian Ethnographical Exhibition" in Moscow. The four Russian composers whose works were played at the concert were Mikhail Glinka, Alexander Dargomyzhsky, Mily Balakirev, and Nikolai Rimsky-Korsakov.[1] The article ended with the following statement:

God grant that our Slav guests may never forget today's concert; God grant that they may forever preserve the memory of how much poetry, feeling, talent, and intelligence are possessed by the small but already mighty handful of Russian musicians.[2]
—Vladimir Stasov, Sankt-Peterburgskie Vedomosti, 1867

The expression "mighty handful" (Russian: Могучая кучка, Moguchaya kuchka, "Mighty Bunch" or "Group"), was mocked by enemies of Balakirev and Stasov: Aleksandr Serov, academic circles of the conservatory, the Russian Musical Society, and their press supporters. The group responded by defiantly adopting the name.[2] This loose collection of composers gathered around Balakirev now included Cui, Mussorgsky, Rimsky-Korsakov, and Borodin — the five who have come to be associated with the name "Mighty Handful", or sometimes "The Five". Gerald Abraham stated flatly in the Grove Dictionary of Music and Musicians that "they never called themselves, nor were they ever called in Russia, 'The Five'"[3] (although today the Russian equivalent "Пятерка" ("Pyatyorka") is occasionally used to refer to this group.[4]). In his memoirs, Rimsky-Korsakov routinely refers to the group as "Balakirev's circle", and occasionally uses "The Mighty Handful", usually with an ironic tone. He also makes the following reference to "The Five":

If we leave out of account Lodyzhensky, who accomplished nothing, and Lyadov, who appeared later, Balakirev's circle consisted of Balakirev, Cui, Mussorgsky, Borodin, and me (the French have retained the denomination of "Les Cinq" for us to this day).[5]
—Nikolay Rimsky-Korsakov, Chronicle of My Musical Life, 1909

The Russian word kuchka also spawned the terms "kuchkism" and "kuchkist", which may be applied to artistic aims or works in tune with the sensibilities of The Mighty Handful.

The name of Les Six, an even looser collection of French-speaking composers, emulates that of "The Five".

The formation of the group began in 1856, with the first meeting of Balakirev and César Cui. Modest Mussorgsky joined them in 1857, Nikolai Rimsky-Korsakov in 1861, and Alexander Borodin in 1862. All the composers in The Five were young men in 1862. Balakirev was 25, Cui 27, Mussorgsky 23, Borodin the eldest at 28, and Rimsky-Korsakov just 18. They were all self-trained amateurs. Borodin combined composing with a career in chemistry. Rimsky-Korsakov was a naval officer (he wrote his First Symphony on a three-year naval voyage circumnavigating the globe). Mussorgsky had been in the Guards, then in the civil service before taking up music; even at the height of his career in the 1870s he was forced by the expense of his drinking habit to hold down a full-time job in the State Forestry Department.[6]

In contrast to the élite status and court connections of Conservatory composers such as Pyotr Ilyich Tchaikovsky, The Five were mainly from the minor gentry of the provinces. To some degree their esprit de corps depended on the myth, which they themselves created, of a movement that was more "authentically Russian," in the sense that it was closer to the native soil, than the classic academy.[7]

Before them, Mikhail Glinka and Alexander Dargomyzhsky had gone some way towards producing a distinctly Russian kind of music, writing operas on Russian subjects, but The Mighty Handful represented the first concentrated attempt to develop such a music, with Stasov as their artistic adviser and Dargomyzhsky as an elder statesman to the group, so to speak. The circle began to fall apart during the 1870s, no doubt partially due to the fact that Balakirev withdrew from musical life early in the decade for a period of time. All of "The Five" are buried in Tikhvin Cemetery in Saint Petersburg.

The musical language The Five developed set them far apart from the Conservatoire. This self-conscious Russian styling was based on two elements:

One hallmark of "The Five" was its reliance on orientalism.[10] Many quintessentially "Russian" works were composed in orientalist style, such as Balakirev's Islamey, Borodin's Prince Igor and Rimsky-Korsakov's Scheherazade.[10] Orientalism, in fact, became widely considered in the West both one of the best-known aspects of Russian music and a trait of Russian national character.[11] As leader of "The Five," Balakirev encouraged the use of eastern themes and harmonies to set their "Russian" music apart from the German symphonism of Anton Rubinstein and other Western-oriented composers.[10] Because Rimsky-Korsakov used Russian folk and oriental melodies in his First Symphony, Stasov and the other nationalists dubbed it the "First Russian Symphony," even though Rubinstein had written his Ocean Symphony a dozen years before it.[10] These were themes Balakirev had transcribed in the Caucasus.[10] "The symphony is good," Cui wrote to Rimsky-Korsakov in 1863, while the latter was out on naval deployment. "We played it a few days ago at Balakirev's—to the great pleasure of Stassov. It is really Russian. Only a Russian could have composed it, because it lacks the slightest trace of any stagnant Germanness."[12]

Two major works entirely dominated by orientalism are Rimsky-Korsakov's symphonic suite Antar and Balakirev's symphonic poem Tamara.[13] Antar, set in Arabia, uses two different styles of music, Western (Russian) and Eastern (Arabian).[13] The first theme, Antar's, is masculine and Russian in character.[13] The second theme, feminine and oriental in melodic contour, belongs to the queen, Gul Nazar.[13] Rimsky-Korsakov was able to soften the implicit misogyny to some extent.[13] However, female sensuality does exert a paralyzing, ultimately destructive influence.[13] With Gul Nazar extinguishing Antar's life in a final embrace, the woman overcomes the man.[13]

Balakirev gives a more overtly misogynistic view of oriental women in Tamara.[13] He had originally planned to write a Caucasan dance called a lezginka, modeled on Glinka, for this work.[14] However, he discovered a poem by Mikhail Lermontov about the beautiful Tamara, who lived in a tower alongside the gorge of Daryal.[14] She lured travelers and allowed them to enjoy a night of sensual delights, only to kill them and throw their bodies into the River Terek.[14] Balakirev uses two specific codes endemic to orientalism in writing Tamara. The first code, based on obsessive rhythms, note repetitions, climactic effects and accelerated tempi, represents Dionysian intoxication.[13] The second code, consisting of unpredictable rhythms, irregular phrasing and based on long passages with many repeat notes, augmented and diminished intervals and extended melismas, depict sensual longing.[13] Not only did Balakirev use these codes extensively, but he also attempted to supercharge them further when he revised the orchestration of Tamara in 1898.[14]

A direct result of such orientalism was the big influence that this circle left on the formation of classical traditions in other nations of the east and south of Russia. For instance, one of Rimsky-Korsakov's famous students, Alexander Spendiaryan went on to become the founder of Armenian classical music, carrying on the traditions and aesthetics of the Mighty Handful to the Caucasus.

Rimsky-Korsakov provides the following picture of "The Mighty Handful" in his memoirs, Chronicle of My Musical Life (translated by J. A. Joffe):

"The tastes of the circle leaned towards Glinka, Schumann, and Beethoven's last quartets ... they had little respect for Mendelssohn ... Mozart and Haydn were considered out of date and naive ... J. S. Bach was held to be petrified ... Chopin was likened by Balakirev to a nervous society lady ... Berlioz was highly esteemed ...Liszt was comparatively unknown ... Little was said of Wagner ... They respected Dargomyzhsky for the recitative portions of Rusalka ... [but] he was not credited with any considerable talent and was treated with a shade of derision. ...Rubinstein had a reputation as a pianist, but was thought to have neither talent nor taste as a composer."

"Balakirev, who had never had any systematic course in harmony and counterpoint and had not even superficially applied himself to them, evidently thought such studies quite unnecessary ... An excellent pianist, a superior sight reader of music, a splendid improviser, endowed by nature with the sense of correct harmony and part-writing, he possessed a technique partly native and partly acquired through a vast musical erudition, with the help of an extraordinary memory, keen and retentive, which means so much in steering a critical course in musical literature ... He instantly felt every technical imperfection or error, he grasped a defect in form at once. Whenever I or other young men, later on, played him our essays at composition, he instantly caught all the defects of form, modulation, and so on, and forthwith seating himself at the piano, he would improvise and show how the composition in question should be changed exactly as he indicated, and frequently entire passages in other people's compositions became his and not their putative authors' at all. He was obeyed absolutely, for the spell of his personality was tremendous. ... His influence over those around him was boundless, and resembled some magnetic or mesmeric force. ... he despotically demanded that the tastes of his pupils should exactly coincide with his own. The slightest deviation from his taste was severely censured by him. By means of raillery, a parody or caricature played by him, whatever did not suit him at the moment was belittled — and the pupil blushed with shame for his expressed opinion and recanted...."

"Balakirev considered me a symphony specialist ... in the sixties, Balakirev and Cui, though very intimate with Mussorgsky and sincerely fond of him, treated him like a lesser light, and of little promise at that, in spite of his undoubted talent. It seemed to them that there was something missing in him and, in their eyes, he was in need of advice and criticism. Balakirev often said that Mussorgsky had "no head" or that his "brains were weak." ... Balakirev thought that Cui understood little in symphony and musical forms and nothing in orchestration, but was a past master in vocal and operatic music; Cui, in turn, thought Balakirev a master in symphony, form, and orchestration, but with little liking for operatic composition and vocal music in general. Thus they complemented each other, but each, in his own way, felt mature and grown up. Borodin, Mussorgsky, and I, however — we were immature and juvenile. Obviously, towards Balakirev and Cui we were in somewhat subordinate relations; their opinions were listened to unconditionally...."

Except perhaps for Cui, the members of this group influenced or taught many of the great Russian composers who were to follow, including Alexander Glazunov, Mikhail Ippolitov-Ivanov, Sergei Prokofiev, Igor Stravinsky, and Dmitri Shostakovich.