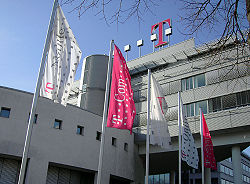 Deutsche Telekom AG (abbreviated DTAG, English: German Telecom) is a telecommunications company headquartered in Bonn, Germany. It is the largest telecommunications company in Europe. Deutsche Telekom was formed in 1996 as the former state-owned monopoly Deutsche Bundespost was privatized. As of June 2008, the German government still holds a 15% stake in company stock directly, and another 17% through the government bank KfW.

The former CEO Kai-Uwe Ricke was ousted by the board of the company because of slumping sales and the flight of customers to cheaper competitors. More than 1.5 million customers changed to rival companies during 2005 and 2006 and as a result, Deutsche Telekom laid off more than 30,000 workers.[3] The new CEO was announced on November 12, 2006 after a long-night board session: René Obermann, the former CEO of T-Mobile International.[4]

The predecessor of Ricke, Ron Sommer, chairman of Deutsche Telekom between 1995 and 2002, was ousted because of the drop in the share price of the company in 2002.[5] At the height of the dot-com bubble, the share was valued at over €100 but fell significantly to about €12/share during a couple of months.[5] Sommer said that "he had some opinion-based difficulties between him and board of the Telekom".

As part of the Deutsche Telekom eavesdropping controversy, charges were filed against the company for allegedly abusing call data to snoop on supervisory board members and journalists.[6][7][8] In October 2008 the company confirmed that personal information of 17 million mobile phone customers had been copied.[9][10]

All subsidiaries of Deutsche Telekom have names starting with "T-".

A new Group structure was introduced on January 1, 2005, Deutsche Telekom has merged the two organizational business units of T-Com and T-Online into the Broadband/Fixed Network (BBFN) strategic business area. With around 40 million narrowband lines, over 9 million broadband lines and 14 million registered Internet customers, the Broadband/Fixed Network business area is one of the largest providers in Europe. R&D is now driven by Deutsche Telekom Laboratories (T-Labs).

On September 8, 2009 Orange and T-Mobile parent Deutsche Telekom announced they were in advanced talks to merge their UK operations to create the largest mobile operator with 37% of the market. It is unclear the future of either brand when such deal is completed in November 2009.[11] 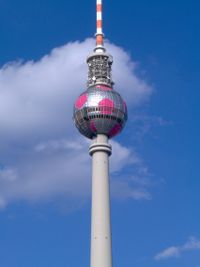 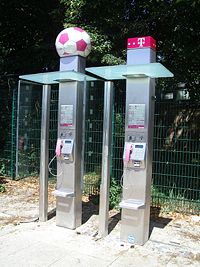 Deutsche Telekom phonebooths next to the Olympic Stadium (Berlin) in 2006, in a design of FIFA 2006 with a sphere decorated as a football

The following facilities are free standing TV Towers - some of which have publicly accessible observation decks.

Transmission facilities for long- and mediumwave

Telekom AG promoted the career of Ella Larsson,[12] by featuring her first song, entitled "Lara's Song", in their television advertisement during the winter of 2008.[13]

The company also promote songs from many other musicians, which are available to download for free from the Telekom AG official website.