Chaplain of the United States House of Representatives

Chaplain of the United States House of Representatives

House Speaker John Boehner and Minority Leader Nancy Pelosi present a flag flown over the U.S. Capitol to Fr. Daniel Coughlin, in recognition for his 11 years of service as the 59th Chaplain of the House of Representatives, April 2011 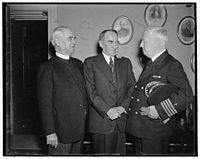 The election of William Linn as Chaplain of the House on May 1, 1789, continued the tradition established by the Continental Congresses of each day's proceedings opening with a prayer by a chaplain. The early Chaplains alternated duties with their Senate counterparts on a weekly basis, covering the House one week and the Senate the next. The two Chaplains also conducted Sunday services for the Washington community in the House chamber every other week.

In addition to opening proceedings with prayer, the Chaplain provides pastoral counseling to the House community, coordinates the scheduling of guest chaplains, and arranges memorial services for the House and its staff. In the past, Chaplains have performed marriage and funeral ceremonies for House members.

Chaplains are elected as individuals and not as representatives of any religious community, body, or organization. As of 2011, all House Chaplains have been Christian but can be members of any religion or faith group. Guest Chaplains, recommended by congressional members to deliver the session's opening prayer in place of the House Chaplain, have represented many different religious groups, including Judaism and Islam. 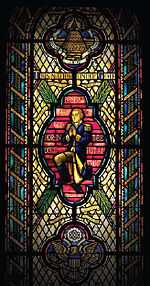 The Chaplain of the United States House of Representatives is chosen to "perform ceremonial, symbolic, and pastoral duties."[3] These responsibilities include opening House sessions with a prayer or coordinating the delivery of the prayer by guest chaplains recommended by members of the House.[4][5][6]

The House Chaplain is also responsible for "hosting" Guest Chaplains on the day they deliver prayers.[7]

The Chaplain also provides pastoral care for members of Congress, their staffs, and their families, and provides or oversees religious programs such as Bible study, reflection groups, and the weekly Senate Prayer Breakfast.[4] The Chaplain also often presides over religious ceremonies such as funerals and memorial services for current or past members and participates, offering delivering the invocation or benediction, at many official U.S. ceremonies, including White House events.[8] In a January 2011 post on "On Watch in Washington," the Chaplain of the Senate as well as the Chaplain of the House of were included as part of "Obama's Spiritual Cabinet."[8]

Along with the Senate Chaplain, the Senate Chaplain is responsible for overseeing the Capitol Prayer Room, located near the Capitol Rotunda.[9] Dedicated in 1955, there are no worship services held in the room, nor is it normally open to the public.[9] Instead, as described by Sam Rayburn during the room's dedication, it is a place for members "who want to be alone with their God."[9]

While all House Chaplains (as of 2011) have been Christian, Guest Chaplains have been selected to deliver occasional prayers to open House sessions "for many decades,"[3] and have represented both Christian and non-Christian faith groups, including Judaism and Islam.[10][11][12] Congressional members are limited to one Guest Chaplain recommendation per Congress,[13]

The inclusion of a prayer before the opening of each session of both the House and the Senate, traces its origins back to the days of the Continental Congress, and the official recommendation of Benjamin Franklin, June 28, 1787:

“I have lived, Sir, a long time, and the longer I live, the more convincing proofs I see of this truth: that God Governs in the affairs of men. And if a sparrow cannot fall to the ground without his notice, is it probable that an empire can rise without his aid? We have been assured, Sir, in the sacred writings, that ‘except the Lord build the House they labour in vain that build it.’ I firmly believe this; and I also believe that without his concurring aid we shall succeed in this political building no better, than the Builders of Babel . . . I therefore beg leave to move— that henceforth prayers imploring the assistance of Heaven, and its blessings on our deliberations, be held in this Assembly every morning before we proceed to business, and that one or more of the Clergy of this City be requested to officiate in that Service.”[14]

The official brochure of the Chaplain of the United States House of Representatives lists the following elements of the "ministry of outreach" provided by the chaplain:[15] 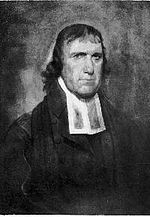 William Linn, first Chaplain of the US House of Representatives

Shortly after Congress first convened in April 1789 in New York City, one of its "first orders of business" was to convene a committee to recommend a Chaplain,[16] eventually selecting the Reverend William Linn as the first Chaplain of the United States House of Representatives.[17] When the body moved to Philadelphia the next year, and then to Washington, D.C., clergy from various Christian denominations ("mainline Protestant denominations--usually Episcopalians or Presbyterians") continued to be selected, delivering prayers and presiding at funerals and memorial services.[16]

During this early period, Chaplains "typically served" for less than a year while concurrently serving in non-congressional positions.[16] Also, early Senate and House Chaplains, although elected separately by their respected chambers, shared Congressional responsibilities by alternating service in the House and Senate on a weekly basis, also conducting Sunday worship for the Washington, D.C. community in the House Chamber on an alternating basis.[18] Clergy have served in the official position of Senate Chaplain for all years since the office was created except for the brief period of 1855-1861 (and the Senate has had chaplains for every year except 1857-1859).[7] Since 1914, the Chaplain's Prayer has been included in the Congressional Record.[16]

The Chaplain must be elected to a two-year term at "the beginning of each Congress.[3] Both the House and Senate Chaplains are elected as individuals, "not as representatives of any religious body or denominational entity."[3]

Selection of House Chaplains has "generally not been subject to party considerations."[3] 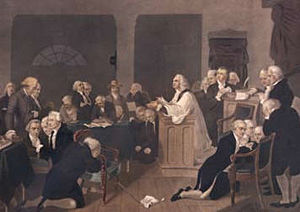 The question of the constitutionality of the position of the House Chaplain (as well as that of the Senate Chaplain, and at times, that of military chaplains as well), has been a subject of study and debate over the centuries.[10] Opponents have argued that it violates the separation of church-and-state and proponents have argued, among other factors, that the fact that the same early legislators who wrote the United States Constitution and its Bill of Rights, from which the position of "non-establishment" and church and state separation is derived, were the same ones who approved and appointed the chaplains.[10]

President James Madison was an example of a leader who ultimately came to think that the positions of Senate and House Chaplains could not be constitutionally supported, although whether he always held this view (and to what extent he believed it at various times during his life) is a subject of debate.[10] However it is clear from his "Detached Memoranda" writings during his retirement that he had come to believe the positions could not be justified:

Is the appointment of Chaplains to the two Houses of Congress consistent with the Constitution, and with the pure principle of religious freedom?

In strictness the answer on both points must be in the negative. The Constitution of the U. S. forbids everything like an establishment of a national religion. The law appointing Chaplains estabfishes a religious worship for the national representatives, to be performed by Ministers of religion, elected by a majority of them; and these are to be paid out of the national taxes. Does not this involve the principle of a national establishment, applicable to a provision for a religious worship for the Constituent as well as of the representative Body, approved by the majority, and conducted by Ministers of religion paid by the entire nation.

The establishment of the chaplainship to Congress is a palpable violation of equal rights, as well as of Constitutional principles: The tenets of the chaplains elected [by the majority] shut the door of worship agst the members whose creeds & consciences forbid a participation in that of the majority. To say nothing of other sects, this is the case with that of Roman Catholics & Quakers who have always had members in one or both of the Legislative branches. Could a Catholic clergyman ever hope to be appointed a Chaplain? To say that his religious principles are obnoxious or that his sect is small, is to lift the evil at once and exhibit in its naked deformity the doctrine that religious truth is to be tested by numbers, or that the major sects have a right to govern the minor.[10]

The constitutionality question has been examined in a number of court cases.[3] According to "House and Senate Chaplains: An Overview," an official 2011 Crs report created by the Congressional Research Service for "Members and Committees of Congress":

The constitutionality of legislative chaplains was upheld in 1983 by the Supreme Court (Marsh v. Chambers, 463 U.S. 783, related to chaplains in the Nebraska Legislature) on the grounds of precedent and tradition. The Court cited the practice going back to the Continental Congress in 1774 and noted that the custom “is deeply embedded in the history and tradition of this country” from colonial times and the founding of the republic. Further, the Court held that the use of prayer “has become part of the fabric of our society,” coexisting with “the principles of disestablishment and religious freedom.” This decision was cited in Murray v. Buchanan, which challenged the House chaplaincy, the next year. On appeal, the U.S. Court of Appeals for the District of Columbia dismissed the complaint “for want of a substantial constitutional question.” Subsequently, on March 25, 2004, the U.S. District Court for the District of Columbia, citing Marsh v. Chambers, dismissed a suit that challenged the congressional practice of paid chaplains as well as the practice of opening legislative sessions with prayer.[3]

In 2000, a C-span "public affairs on the web" response to the question of constitutional challenges noted that:

"In 1983, the Supreme Court upheld the practice of having an official chaplain as deeply ingrained in the history and tradition of this country. They stated the ultimate authority for the position lies in the Constitution which states that the House and Senate may each choose their officers, with no restrictions on what kind of officers may be chosen. Using that authority, both chambers have chosen to continue to elect an officer to act as Chaplain."[7]

In addition to court cases, controversy regarding the Chaplain's position included a number of petitions to abolish both the Senate and House Chaplains that were submitted as early as the 1850s, for reasons including claims that the positions represented a violation of the separation of church and state and that the choice of chaplains had become too politicized.[3] From 1855-1861,[7] the election of Chaplains for the House and from 1857-1859,[7] the election of Chaplains for the Senate were suspended, with local clergy invited to serve on a voluntary basis, instead.[3] However, as a result of "the difficulty in obtaining volunteer chaplains" and the opportunity for volunteer chaplains to get to know "their flock," Congress returned to the practice of selecting official Chaplains for both the House and the Senate.[3][7]

Fr. Patrick J. Conroy S.J. (born October 31, 1950), a Jesuit Priest, currently serves as the 60th Chaplain of the House of Representatives. His selection was announced by the office of John Boehner, Speaker of the United States House of Representatives, on May 6, 2011,[19] and he was sworn in as the new House Chaplain May 25, 2011,[2] following a unanimous confirmation of his nomination by the House.[20]

Information regarding past and current House Chaplains, taken from the official House of Representatives website, includes the following:[22]