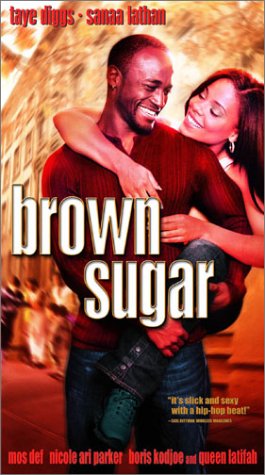 "Brown Sugar" is a 2002 , written by Michael Elliott and , and directed by Rick Famuyiwa. This movie stars and . This film is the story of a hip-hop record executive and a magazine editor (who have been friends since childhood) becoming more than friends despite the fact that they're both involved in other relationships. The story is based on the song, "," by Common, a story of how a relationship with hip hop connects to a relationship between a man and woman.

"Brown Sugar" follows the evolving relationship between Sidney (), an attractive young woman who has just been appointed the editor-in-chief of the hip-hop magazine "XXL", and Dre (), a who has been bound to Sidney since their early childhood. The news that Dre is going to be married to Reese (), a successful attorney who happens to be stunningly beautiful, sends Sidney into a subconscious tizzy. Suddenly, she doesn't seem to know how to behave around Dre anymore, and an impulsive kiss on the eve of his wedding sends fissures of doubt cracking in every direction.

"I've started every interview I've ever given the same way for over ten years - so, when'd you fall in love with Hip Hop?...I remember the same exact day I fell in love with Hip Hop... it was July 18th,1984... The day I saw Slick Rick (who went by Ricky D back then) Dana Dane, and Doug E. Fresh battle in the Bronx was the day I truly met Hip Hop. Little did I know a year later, Ricky D would join the get fresh crew and record the Hip Hop classic "The Show" and of course, the B side, "La Di Da Di". Dana Dane would drop a couple years later with his classic, "Cinderfella". Little did I know how much hip hop would be a part of my life. Hip Hop was as young, naive, confused, sometimes innocent, and sometimes, as mischievous as I was. And as I grew up, Hip Hop grew with me. And along the way it took all my baggage - my dreams. I felt Hip Hop. And Hip Hop felt me. And I know everyone who loves the music feels the same way I do." - Sidney

"We all looking for wifey material. A woman that's fine, smart, classy but not a snob; hella hella sexy but not a ho. That's brown sugar. That's my Reese." - Dre