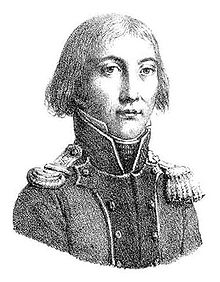 Claude Antoine, comte Prieur-Duvernois, commonly known as Prieur de la Côte-d'Or after his native département, to distinguish him from Pierre Louis Prieur (2 December 1763—11 August 1832), was a French engineer and a politician during and after the French Revolution.

Born in Auxonne, Côte-d'Or. As an officer of engineers, he presented to the National Constituent Assembly in 1790 a Mémoire on the standardization of weights and measures.

In 1791 he was returned by the Côte-d'Or to the Legislative Assembly, and in 1792 to the National Convention. In 1792, Prieur-Duvernois was sent on a mission to the Army of the Rhine to announce the deposition of King Louis XVI, after having voted in favor of his execution.

In 1793 he was a representative on mission surveying the ports of Lorient and Dunkirk, but he was arrested in Normandy upon the fall of the Girondists (June 1793) by the rebel authorities of Caen, and only released in July 1793 after the defeat of their forces at Vernon.

On 14 August 1793 he became a member of the Committee of Public Safety, where he allied himself with Lazare Carnot in the organization of national defence, being especially charged with the provision of munitions for the troops engaged in the French Revolutionary Wars.[1] With Carnot, he aligned with the Reign of Terror, and voted in favor of Georges Danton's execution.

Retaining his seat after the Thermidorian Reaction, he managed to escape capture in the riots of 1 Prairial Year III, and was subsequently spared the attacks of moderates in the Thermidorian Convention.

Under the Directory he sat in the Council of Five Hundred, retiring after Napoleon Bonaparte's 18 Brumaire coup (9 November 1799). In 1808 he was created a count of the Empire, and in 1811 he retired from the army with the grade of chef de brigade (the equivalent of colonel).

Prieur-Duvernois was one of the founders of the École Polytechnique, and shared in the establishment of the Institut de France; the adoption of the metric system and the foundation of the Bureau des Longitudes were also due to his efforts. Prieur died in Dijon.