Saint Margaret of Scotland (c. 1045 – 16 November 1093), also known as Margaret of Wessex and Queen Margaret of Scotland, was an English princess of the House of Wessex. Born in exile in Hungary, she was the sister of Edgar Ætheling, the short-ruling and uncrowned Anglo-Saxon King of England. Margaret and her family returned to England in 1057, but fled to the Kingdom of Scotland following the Norman conquest of England of 1066. Around 1070 Margaret married Malcolm III of Scotland, becoming his Queen consort. She was a pious woman, and among many charitable works she established a ferry across the Firth of Forth for pilgrims travelling to Dunfermline Abbey, which gave the towns of South Queensferry and North Queensferry their names. Margaret was the mother of three Kings of Scotland and a Queen consort of England. According to the Life of Saint Margaret, attributed to Turgot of Durham, she died at Edinburgh Castle in 1093, just days after receiving the news of her husband's death in battle. In 1250 she was canonised by Pope Innocent IV, and her remains were reinterred in a shrine at Dunfermline Abbey. Her relics were dispersed after the Scottish Reformation and subsequently lost.

Margaret was the daughter of the English prince, Edward the Exile and granddaughter of Edmund Ironside, king of England. After the Danish conquest of England in 1016, Canute had the infant Edward exiled to the continent. He was taken first to the court of the Swedish king, Olof Skötkonung, and then to Kiev. As an adult, he travelled to Hungary, where in 1046 he supported Andrew I's successful bid for the throne. The provenance of Margaret's mother, Agatha, is disputed, but Margaret was born in Hungary around 1045. Her brother Edgar the Ætheling and her sister Cristina were also born in Hungary around this time. Margaret grew up in a very religious environment in the Hungarian court. Andrew I of Hungary was known as "Andrew the Catholic" for his extreme aversion to pagans, and great loyalty to Rome, which probably could have induced Margaret to follow a pious life.

Still a child, she came to England with the rest of her family when her father, Edward, was recalled in 1057 as a possible successor to her great-uncle, the childless Edward the Confessor. Her father died soon after the family's arrival in England, but Margaret continued to reside at the English court where her brother, Edgar Ætheling, was considered a possible successor to the English throne. When the Confessor died in January 1066, Harold Godwinson was selected as king, Edgar perhaps being considered still too young. After Harold's defeat at the battle of Hastings later that year, Edgar was proclaimed King of England, but when the Normans advanced on London, the Witenagemot presented Edgar to William the Conqueror who took him to Normandy before returning him to England in 1068, when Edgar, Margaret, Cristina and their mother Agatha fled north to Northumbria.

According to tradition, the widowed Agatha decided to leave Northumbria with her children and return to the continent. However, a storm drove their ship north to Scotland, where they sought the protection of King Malcolm III. The spot where they are said to have landed is known today as St. Margaret's Hope, near the village of North Queensferry. Margaret's arrival in Scotland in 1068, after the failed revolt of the Northumbrian earls, has been heavily romanticized, though Symeon of Durham implied that her first meeting with Malcolm III of Scots may not have been until 1070, after William the Conqueror's harrying of the north.

Malcolm was probably a widower, and was no doubt attracted by the prospect of marrying one of the few remaining members of the Anglo-Saxon royal family. The marriage of Malcolm and Margaret took place some time before the end of 1070. Malcolm followed it with several invasions of Northumberland, probably in support of the claims of his brother-in-law Edgar. These, however, had little result beyond the devastation of the province.[1]

Margaret's biographer Turgot, Bishop of St. Andrews, credits her with having a civilizing influence on her husband Malcolm by reading him stories from the Bible. She instigated religious reform, striving to make the worship and practices of the Church in Scotland conform to those of Rome. She was considered an exemplar of the "just ruler", and influenced her husband and children, especially her youngest son, later David I, also to be just and holy rulers. She attended to charitable works, serving orphans and the poor every day before she ate, and washing the feet of the poor in imitation of Christ. She rose at midnight every night to attend church services. She invited the Benedictine order to establish a monastery at Dunfermline in Fife and established ferries at Queensferry and North Berwick to assist pilgrims journeying from south of the Forth Estuary to St. Andrews in Fife. A cave on the banks of the Tower Burn in Dunfermline was used by her as a place of devotion and prayer. St Margaret's Cave, now covered beneath a municipal car park, is open to the public.[2] 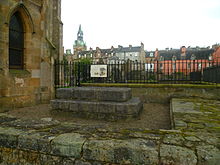 Site of the shrine of St. Margaret, Dunfermline Abbey, Fife

Her husband, Malcolm III, and their eldest son, Edward, were killed in a fight against the English at the Battle of Alnwick on 13 November 1093. Her son Edmund was left with the task of telling his mother of their deaths. Margaret was ill, and she died on 16 November 1093, three days after the deaths of her husband and eldest son. 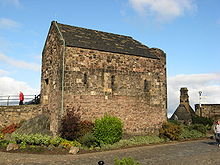 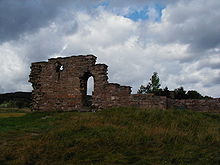 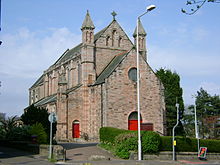 Saint Margaret was canonised in the year 1250 by Pope Innocent IV in recognition of her personal holiness, fidelity to the Church, work for religious reform, and charity. On 19 June 1250, after her canonisation, her remains were moved to Dunfermline Abbey.[3] The Roman Catholic Church formerly marked the feast of Saint Margaret of Scotland on 10 June, because the feast of "Saint Gertrude, Virgin" was already celebrated on 16 November, but in Scotland, she was venerated on 16 November, the day of her death. In the revision of the Roman Catholic calendar of saints in 1969, 16 November became free and the Church transferred her feast day to 16 November.[4] However, some traditionalist Catholics continue to celebrate her feast day on 10 June. She is also venerated as a saint in the Anglican Church.

Several churches are dedicated to Saint Margaret. One of the oldest is St Margaret's Chapel in Edinburgh Castle, which was founded by her son King David I. The chapel was long thought to have been the oratory of Margaret herself, but is now considered to be a 12th century establishment. The oldest building in Edinburgh, it was restored in the 19th century, and refurbished in the 1990s.

St. Margaret's Church (Margaretakirken) in Maridalen near Oslo, Norway, is dedicated to Saint Margaret of Scotland. The stone church dates from the middle of the 1200s. It is now a ruin, but after restoration in 1934 the church today is one of the best-preserved medieval buildings in Oslo after the Old Aker Church.[5]

Others include the 13th-century Church of St Margaret the Queen in Buxted, East Sussex,[6] and St Margaret of Scotland, Aberdeen.

A number of foundations, particularly in Scotland, are named after Saint Margaret: