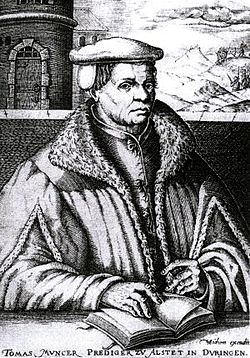 Thomas Müntzer, in an 18th century engraving by C. Van Sichem. No contemporary image of the reformer exists.

Thomas Müntzer (ca. 1489, Stolberg, Saxony-Anhalt – 27 May 1525) was an early Reformation-era German theologian, who became a rebel leader during the Peasants' War. He turned against Luther with several anti-Lutheran writings, and supported the Anabaptists. In the Battle of Frankenhausen, Müntzer and his followers were defeated. He was captured, tortured and decapitated.[1]:535

From the 19th century, he has been lionized by socialists (especially Friedrich Engels) as an early symbol of class struggle.

Müntzer was born in the small village of Stolberg in the Harz Mountains (what is now Saxony-Anhalt), in about 1489. Thomas Müntzer initially studied at the University of Leipzig and later the University of Frankfurt, though it is unknown what academic degree he ultimately attained. He became versed in the Greek, Hebrew and Latin languages.

From the summer of 1516 to the fall of 1518, Müntzer stayed in a monastery at Frohse, though publication of Martin Luther's 95 theses on 31 October 1517, most likely motivated Müntzer to leave the monastery and travel to Wittenberg. There he reputedly had a confrontation with Luther, who despised Müntzer for his politicization of Luther's reformation. After brief stints at Orlamünde and Jüterbog in 1519, Müntzer may have traveled to Leipzig to witness the famous debates between John Eck and Andreas Karlstadt (27 June to 3 July), and between Luther and Eck (4 July to 14 July). Müntzer continued to move frequently, accepting the position of father confessor at a nunnery in Beuditz in December of 1519 before heading to Zwickau in 1520.

In May 1520, Müntzer became a pastor in Zwickau in Thuringia and it was in there that Müntzer had his first significant confrontation with church authorities. In 1521 and 1522, however, the growing divide between Luther and Müntzer’s beliefs became apparent, as Müntzer developed his theology further and rejected infant baptism.

When the Zwickau authorities expelled Müntzer in April 1521, he fled to Prague. He was initially feted in the town when he arrived in June, welcomed as a follower of Luther, with accommodation provided for him and invitations to preach in Latin and German in the University chapels. For unknown reasons, however, by November he was far less welcome. That month he wrote the Prague Manifesto. This survives in four different versions in German and Latin, and is an angry, anticlerical, apocalyptic work.

In December 1521, Müntzer left Prague. He spent 1522 moving about, not staying in many places. In March 1523, he became pastor at Allstedt, a town of around 900 people in an enclave of Electoral Saxony in Thuringia. In June 1523, he married a former nun, Ottilie von Gerson. In November, he was interrogated by George Spalatin and Frederick the Wise. Luther pressed for a private confrontation in Wittenberg, but Müntzer wanted a more public disputation, and nothing happened. In December 1523, Müntzer produced the first completely German liturgy, the Order of German Church Service, for use in Allstedt.

On 13 July 1524, Müntzer apparently delivered his Sermon to the Princes, a sermon allegedly given to Duke John of Saxony and his advisors in Allstedt, though the circumstances surrounding this event are unclear. The sermon focuses on Daniel 2, a chapter in which Daniel, hostage in Babylon, becomes an adviser to the king because of his ability to interpret dreams. In the sermon, Müntzer presents himself as a new Daniel to interpret the dreams of the princes to them. He interpreted Daniel 2:44 as speaking of the kingdom of God that would consume all earthly kingdoms.

Probably as a result of this event, combined with Luther's Letter to the Princes of early July 1524, which attacked Müntzer and Andreas Karlstadt, Müntzer and others from Allstedt were called to a hearing at Weimar before Duke John of Saxony on 31 July or 1 August. He decided that the printing press at Allstedt was to be shut down. Müntzer fled Allstedt soon after. 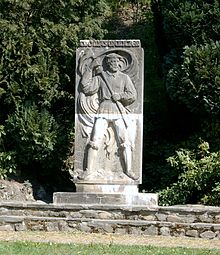 In August 1524, Müntzer became one of the leaders of the uprising later known as the German Peasants' War. After fleeing Allstedt, he arrived in the imperial city of Mühlhausen in Thuringia. In mid-September, he and his associate, the radical former priest Heinrich Pfeiffer, took advantage of long-standing tensions between the middling craftsmen and city council to produce the Eleven Mühlhausen Articles, which called for the dissolution of the existing town council and the formation of an "eternal council" based on divine justice and the Word of God. Copies of this were sent to the peasantry in the surrounding villages, but support did not materialise, apparently because the article expressed predominantly urban grievances which did not address peasant needs. On 27 September 1524, Müntzer and Pfeiffer were expelled from Mühlhausen.

Müntzer spent late 1524 in Nuremberg, but in mid-February 1525 was able to return to Mühlhausen. The following month, the citizenry voted out the old council and a new "Eternal League of God" was formed, composed of a cross-section of the male population and some former councillors. Müntzer and Pfeiffer succeeded in taking over the Mühlhausen town council and set up a communistic theocracy in its place.

Müntzer led a group of about 8000 peasants at the battle of Frankenhausen (15 May 1525) against political and spiritual oppression, convinced that God would intervene on their side. Utterly defeated, captured, imprisoned and tortured, Müntzer recanted and accepted the Roman Catholic mass prior to his beheading in Mühlhausen in Thuringia on 27 May 1525. Under torture he confessed that he believed that omnia sunt communia, all things are in common. His head and body were displayed as a warning to all those who might again preach treasonous doctrines.

Luther and Müntzer disagreed theologically on several doctrines. Müntzer believed and taught of the "living word of God" (i.e., continued revelation and prophecy), the banning of infant baptism, and that the wine and bread of the Eucharist were only emblems of Jesus Christ's sacrifice. Luther disagreed with all of these doctrines. Because of his position on infant baptism, Müntzer ranks as one of the founders of the Anabaptist movement, yet doubt exists as to whether he ever received adult "rebaptism".

Luther was also not as radical as Müntzer. In criticizing the Roman Catholic clergy who did not believe in continued revelation from heaven, Müntzer stated, "These villainous and treacherous parsons are of no use to the church in even the slightest manner, for they deny the voice of the bridegroom, which is a truly certain sign that they are a pack of devils. How could they then be God's servants, bearers of his word, which they shamelessly deny with their whore's brazenness? For all true parsons must have revelations, so that they are certain of their cause." In distinction to Luther, Müntzer believed good works were required in addition to faith to become righteous. Müntzer wrote, "It is the diligent waiting for the Word that makes a beginning Christian. During this waiting one must first suffer the Word, and there must not be any consolation in the fact that our works are delayed. Then one thinks one has no faith at all; indeed, one feels that no faith will come. There is a meager desire for true faith, but it is so weak that one is hardly aware of it. Finally, one must break down and lament, 'Oh what a miserable man I am! What drives me in my heart? My conscience eats up all my strength and everything I am. What shall I do? I have lost confidence in God.' "[2] Müntzer, while renewing theology, kept many of its old doctrines.

This applies to his Marian views as well. In a 1520 sermon in Zwickau on the feast of Mary’s birth, he described her as “Patriarch” “High Priest” and “Queen”.[1]:535 The Virgin Mary is a mediatrix, mediator between day and night, between God and man, mediatrix inter deum et hominem.[1]:535 She won her fight with the devil by her humility. Her person shows the power of God, because her greatness was not result of her own doing but of his grace. The birth of Mary gave angels and humans new hope for the restoration of the old order. Müntzer defends the virginity of Mary before, during and after the birth of Jesus.[1]:535 He quotes Bernard of Clairvaux, specifically his Marian arguments. Müntzer insisted that neither Mary nor the apostles were baptized with water. From this, given Mary’s high rank, he argues that baptism by water is inferior to the spiritual act of baptism. Müntzer can be viewed as a father of liberation theology, in that he interpreted the Magnificat – “he raised the lowly” – as Mary’s critique of the existing social order.[1]:535 Müntzer did not develop a systematic mariology, but his Marian views elevate Mary to the pedestal of a supreme model in scripture. Mary represents faith, fides non ficta. In the heavy and often polemical disputes with Luther, Müntzer uses the model life of Mary to prove his views. In all his Marian interpretation, Müntzer quotes scriptures as his basis.[1]:536

Müntzer was adopted by socialists as a symbol of early class struggle due to his promotion of a new egalitarian society which would practice the sharing of goods. Müntzer's movement and the peasants' revolt formed an important topic in Friedrich Engels’s book The Peasant War in Germany, a classic defense of historical materialism. Engels describes Müntzer as a revolutionary leader who chose to use biblical language – the language the peasants would best understand.

At 1956, the East German studio DEFA produced Thomas Müntzer, a biographical film about the priest's life, directed by Martin Hellberg and starring Wolfgang Stumpf in the title role.[3] Müntzer is immortalized in the Peasant's War Panorama in Bad Frankenhausen, whose 1,722 square meters of painted surface make it the largest oil painting in the world.[4] The panorama was inaugurated on September 14, 1989, eight weeks before the fall of the Berlin Wall

Rudolf Dulon's career in the Revolutions of 1848 has been compared to that of Müntzer.