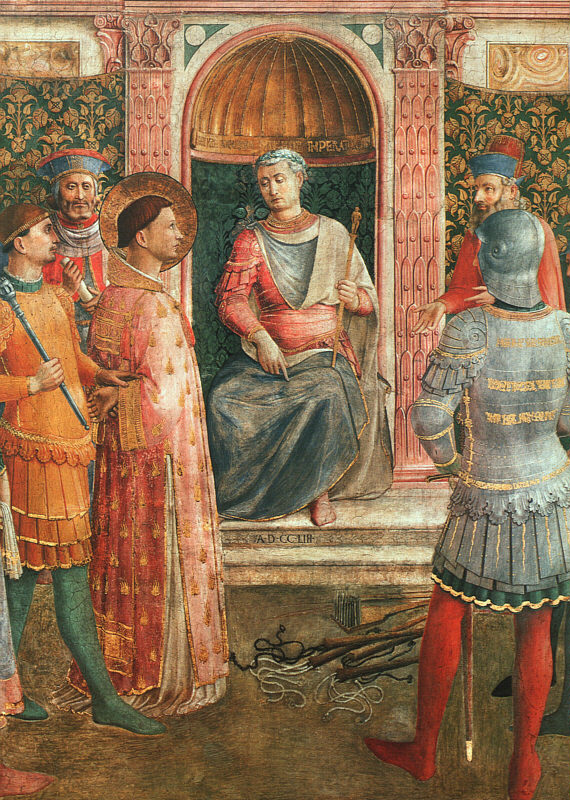 The "Acts" of St Lawrence were lost by the time of Saint Augustine, one of whose sermons on Saint Lawrence ("Sermo 302, de Sancto Laurent.") admits that his narration was gained from tradition instead of reciting the Acts as was his preferred custom. [Saint Ambrose, "De officiis ministrorum," 1.41] Such early s made Lawrence a native of (Roman "Osca") in who had received religious instruction from Archdeacon Sixtus in Rome. When Sixtus became Bishop of Rome in 257, Lawrence was ordained a deacon and was placed in charge of the administration of Church goods and care for the poor. For this duty, he is regarded as one of the first archivists and treasurers of the Church and was made the patron of librarians.

In the persecutions under Valerian in 258, numerous s and s were put to death, while Christians belonging to the nobility or the were deprived of their goods and exiled. Pope St Sixtus II was one of the first victims of this persecution, being beheaded on . A legend cited by St of says that Lawrence met the Pope on his way to his execution, where he is reported to have said, "Where are you going, my dear father, without your son? Where are you hurrying off to, holy priest, without your deacon? Before you never mounted the altar of sacrifice without your servant, and now you wish to do it without me?" The Pope is reported to have prophesied that "after three days you will follow me".

Lawrence is said to have been martyred on a gridiron. During his torture Lawrence cried out "This side’s done, turn me over and have a bite." ["Assum est, inquit, versa et manduca."] [Saint Ambrose, "De officiis ministrorum," 1.41.207]

, the contemporary bishop of Carthage mentions the directive of Valerian that Christian bishops, presbyters, and deacons should forthwith be punished, and records the martyrdom of "Xystus bishop of Rome", in accordance with it on August 6 (Wace). [Cyprian, "Epistles" 80.1: "ad Successum"]

Lawrence and the Holy Chalice

According to lore, among the treasure of the Roman church entrusted to Lawrence for safe-keeping was the , the cup from which Jesus and the Apostles drank at the . Lawrence was able to spirit this away to Huesca with a letter and a supposed inventory, where it lay hidden and unregarded for centuries. When Augustine connects Lawrence with a chalice, it is the chalice of the Mass::"For in that Church, you see, as you have regularly been told, he performed the office of deacon; it was there that he administered the sacred chalice of Christ’s blood"." [Saint Augustine, "Sermon on St. Lawrence"]

According to , the is a relic that was sent by St. Lawrence to his parents in Spain. He entrusted this sacred chalice to a friend whom he knew would travel back to Spain, his home country. While the Holy Chalice's exact journey through the centuries is disputed, it is generally accepted by Catholics that the Chalice was sent by his family to a monastery for preservation and veneration. Historical records indicate that this chalice has been venerated and preserved by a number of monks and monasteries through the ages. Today the Holy Grail is venerated in a special chapel in the Catholic , Spain, in the region of St Lawrence's birth and early life.

The jewels of St Lawrence

After the death of Sixtus, the prefect of Rome demanded that Lawrence turn over the riches of the Church. Ambrose is the earliest source for the tale that Lawrence asked for three days to gather together the wealth. [Saint Ambrose, "De officiis ministrorum," 2.28] Lawrence worked swiftly to distribute as much Church property to the poor as possible, so as to prevent its being seized by the prefect. On the third day, at the head of a small delegation, he presented himself to the prefect, and when ordered to give up the treasures of the Church, he presented the poor, the crippled, the blind and the suffering, and said that these were the true treasures of the Church. One account records him declaring to the prefect, "The Church is truly rich, far richer than your emperor." This act of defiance led directly to his martyrdom. This can be compared to the parallel Roman tale of the jewels of Cornelia.

By tradition, Lawrence was sentenced at , martyred at , and buried in the Via Tiburtina in the Catacomb of Cyriaca by Hippolytus and Justinus, a presbyter. Tradition holds that Lawrence was burned or "grilled" to death, hence his association with the gridiron. One of the early sources for the martyrdom of Saint Lawrence was the description by Aurelius Prudentius Clemens in his "Peristephanon", Hymn II.

Constantine I is said to have built a small oratory in honour of the martyr, which was a station on the itineraries of the graves of the Roman martyrs by the 7th century. rebuilt or repaired the church, now known as San Lorenzo fuori le Mura, while the minor basilica of was built over the place of his martyrdom. The gridiron of the martyrdom was placed by in the church of .

St Lawrence is one of the most widely venerated saints of the . Lawrence is also venerated in the Anglo-Catholic tradition; a major church in the City of Sydney, Australia, situated in the civil (land division) parish of St Lawrence adopted St Lawrence as patron notwithstanding its primary dedication as 'Christ Church', and there was an Anglican order in Melbourne Victoria Australia, the order does not exist as such anymore but they founded the organisation known as the Brotherhood of St Laurence that still bears this name. Devotion to him was widespread by the 4th century. As his martyrdom occurred very early in Church history, many other Christians honor him as well.

St Lawrence is especially honored in the city of Rome, where he is one of the city's patrons. There are several churches in Rome dedicated to him, including San Lorenzo in Panisperma, traditionally identified as the place of his execution. He is invoked by librarians, cooks, and tanners as their patron. His celebration on has the rank of feast throughout the entire Catholic world. [From the oldest Christian calendars, such as the for the year 354, the inventory of which contains the principal feasts of the Roman martyrs of the middle of the fourth century AD, onwards.] On this day, the reliquary containing his burnt head is displayed in the Vatican for veneration.

The Palace, situated at the foot of Mt. Abantos in the , was built by King to commemorate the victory of Spanish forces over those of King at the , which took place on the feast of St Lawrence on 10 August 1557. To honor the martyr, the entire floor plan of this imposing edifice was laid out in the form of a gridiron, the means by which St Lawrence was martyred.

St Lawrence is also the of the monks of

The Divine Office accords this special prayer to him on his feast day (from the translation in "Christian Prayer"):

"Father,you called Saint Lawrence to serve you by loveand crowned his life with glorious martyrdom.Help us to be like himin loving you and doing your work.Grant this through our Lord Jesus Christ, your Son,who lives and reigns with you and the Holy Spirit,one God, for ever and ever. Amen.

Saint Lawrence is referenced in 's "" in tale 6.10, where the veneration of the saint is used by a to escape an embarrassing situation. [See ]

*San Lorenzo del Escorial, the monastery built by Philip II to commemorate his victory at St. Quentin on the feast day of St. Lawrence. The monastery (and the attached palace, college, library, etc.) are laid out in a grid resembling a grill with a handle.
*, French for Saint Lawrence
*, Italian and Spanish for Saint Lawrence
*, Santa Clara, CA, U.S.A.
*
*St. Lawrence neighbourhood, Toronto, Canada
*
*
*
*
*
* Church of St Lawrence
* St Laurence's Church
* Church of St. Lawrence