A combination machine is a woodworking machine that combines the functions of two or more separate machines into a single unit. For example, a combination machine might consist of a tablesaw with a side mounted jointer. Another common example of this type of machine is the jointer-thicknesser (also known as an over-under) which combines the function of a jointer with that of a thicknesser.

Some combination machines run all of their functions from a single motor; others may use more than one. Cutter heads are often shared: for example a jointer-thicknesser may use the same cutter head for both functions. The machines rely upon well thought-out designs which allow the user to switch from one function to another easily.

There are a number of disadvantages of combination machines. Set up time is increased when moving from one function to another and back. In many cases, machine settings are lost during the change over and have to be re-established when changing back. In some lower end machines, there may be compromises in design which limit the function or robustness of the machine. Finally, they represent a single point of failure in that a mechanical problem with the machine will generally mean that none of the machine's functions are available.

These disadvantages are offset by the small size of the machine footprint and potential cost saving and so they are very popular with hobbyists and workshops in which space is limited. 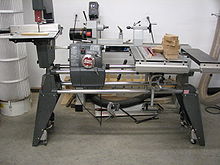 The Shopsmith is a lathe-based multi-tool that uses a single motor to perform lathe, tablesaw, and drill press functions. Variations include horizontal boring and disc sander.

ShopSmith also manufactures and markets a variety of add-on tools that can be run by the base unit motor. Some of these tools include a band saw, wood shaper, jointer, belt sander, strip sander, scroll saw and thickness planer.

One of the unique features of the ShopSmith MARK V is its method of speed control. Rather than multiple pairs of pulleys or an electronic speed control, the Mk V uses a Reeves-type continuously variable transmission consisting of two variable diameter pulleys controlled by a dial and worm gear. Not only does this give theoretically infinite speed variation between the maximum and minimum speeds, it is also simple enough to be serviced fairly easily by a hobbyist.

The Shopsmith is well-known among lawyers in the United States. An injury suffered by the user of a Shopsmith gave the Supreme Court of California the opportunity to create the modern rule of strict liability for defective products in 1963.[1]

Several companies in Austria, Italy, France and Belgium manufacture what is commonly known in North America as a Euro(pean) combination machine, which typically contains a sliding-table saw with a scoring blade, a shaper, a thicknesser, a jointer, and a mortiser. These machines generally have 3 motors, one for the table saw, one for the shaper, and one shared by the thickness planer/jointer and mortiser.

European combination machines are geared for the serious hobbyist or professional woodworker or cabinet maker. They are constructed of cast iron and heavy gauge steel, weigh from 1000 to 2000 lbs., and range in price from around $5,000 to over $30,000 (2010, U.S. dollars).

The European combination machine allows efficient processing of both rough-cut timber and sheet stock (i.e. plywood). The sliding table can work in conjunction with either the table saw or the shaper. Outfitted with an 8-foot sliding table and outrigger, a single person can cut 4'x8' plywood very accurately and efficiently. Changing between most functions takes only a few seconds.

The sliding table allows a straight edge to be cut on rough lumber, without the use of a fence. It also allows a cut to be made accurately at any angle across a sheet of plywood in just seconds - something that cannot be done nearly as easily, if at all, on a table saw. Used in conjunction with the shaper, the sliding table allows molding, door panels, rails and stiles, to be milled quickly and more accurately than a stand-alone shaper.