The Dallas Cowboys Ring of Honor (RoH) was a ring around Texas Stadium in Irving, Texas and currently around Cowboys Stadium in Arlington, Texas which honors former players, coaches and club officials who made outstanding contributions to the Dallas Cowboys football organization.

The Ring of Honor at Texas Stadium

The Ring of Honor began on November 23, 1975, which was designated in Dallas as Bob Lilly Day. On that day, at what was considered the first Cowboys Reunion, the team unveiled Lilly's name and jersey number (74) beneath the press box during half time. As the first honoree, Lilly (who had retired from the NFL in July of '75 after 14 years) donned his Cowboy uniform once more and graciously accepted the honor, along with numerous other gifts, which included a car, a gun and a hunting dog. Also present at the historic event were Cowboys owner Clint Murchison, president/general manager Tex Schramm and Head Coach Tom Landry. As the first inductee, Lilly has the added distinction of returning to present each new member in the RoH.[1] Only nine players received the honor during the first three decades of the Cowboys existence, making the RoH a coveted accolade, true to the dream envisioned by Schramm, its creator. He became only the 12th person selected to the Ring of Honor; the award was given posthumously in October 2003, a few months after he died.

In 2005, an unprecedented three former Cowboys all-stars were simultaneously inducted during half time ceremonies on Monday Night Football. Troy Aikman, Emmitt Smith, and Michael Irvin, known as "The Triplets", were part of the 1990s Three-Time Super Bowl Championship Cowboys team.[2]

Ring of Honor inductees have been chosen by the former president-general manager, Tex Schramm and then by owner Jerry Jones. Schramm set a precedent by placing a high value on the character of the inductees. There was controversy over the selection of Michael Irvin due to his drug charges.[3] 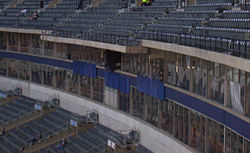 The names of Aikman, Smith and Irvin before being inducted.