The International Security Assistance Force (ISAF) is a NATO-led security mission in Afghanistan established by the United Nations Security Council on 20 December 2001 by Resolution 1386[1] as envisaged by the Bonn Agreement.[2] It is engaged in the War in Afghanistan (2001–present).

ISAF was initially charged with securing Kabul and surrounding areas from the Taliban, al Qaeda and factional warlords, so as to allow for the establishment of the Afghan Transitional Administration headed by Hamid Karzai.[3] In October 2003, the UN Security Council authorized the expansion of the ISAF mission throughout Afghanistan,[4] and ISAF subsequently expanded the mission in four main stages over the whole of the country.[5] Since 2006, ISAF has been involved in more intensive combat operations in southern Afghanistan, a tendency which continued in 2007 and 2008. Attacks on ISAF in other parts of Afghanistan are also mounting.

For almost two years, the ISAF mandate did not go beyond the boundaries of Kabul. According to General Norbert Van Heyst, such a deployment would require at least an extra ten thousand soldiers. The responsibility for security throughout the whole of Afghanistan was to be given to the newly-reconstituted Afghan armed forces. However, on 13 October 2003, the Security Council voted unanimously to expand the ISAF mission beyond Kabul in Resolution 1510. Shortly thereafter, Canadian Prime Minister Jean Chrétien said that Canadian soldiers (nearly half of the entire force at that time) would not deploy outside Kabul.

On 24 October 2003, the German Bundestag voted to send German troops to the region of Kunduz. Around 230 additional soldiers were deployed to that region, marking the first time that ISAF soldiers operated outside of Kabul.

After the Afghan National Assembly and Provincial Council elections in the fall of 2005, the Canadian base Camp Julien at Kabul closed, and remaining Canadian assets moved to Kandahar as part of Operation Enduring Freedom in preparation for a significant deployment in January 2006.

At 31 July 2006, the NATO-led International Security Assistance Force assumed command of the south of the country, ISAF Stage 3, and by 5 October also of the east of Afghanistan, ISAF stage 4.

The mandates the different governments give to their forces differ from country to country. Some governments wish to take a full part in counter-insurgency operations; some are in Afghanistan for NATO alliance reasons; some are in the country partially because they wish to maintain their relationship with the United States federal government, and, possibly, some are there for domestic political reasons. This means that ISAF suffers from a certain lack of united aims. 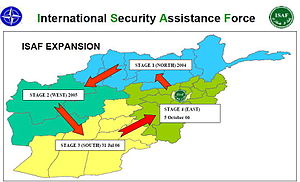 The initial ISAF headquarters was based on 3rd UK Mechanised Division, led at the time by Major General John McColl. This force arrived in December 2001. Until ISAF expanded beyond Kabul, the Force consisted of a roughly division-level headquarters and one brigade covering this capital, the Kabul Multinational Brigade. The brigade was composed of three battle groups, and was in charge of the tactical command of deployed troops. ISAF headquarters serves as the operational control center of the mission.

ISAF command originally rotated among different nations on a 6-month basis. However, there was tremendous difficulty securing new lead nations. To solve the problem, command was turned over indefinitely to NATO on 11 August 2003. This marked NATO's first deployment outside Europe or North America. 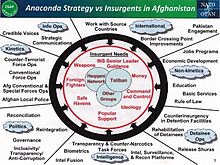 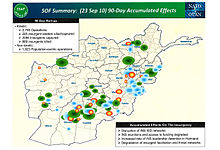 Colombia had planned to deploy around 100 soldiers in Spring 2009.[18][19] These forces were expected to be demining experts.[20][21] General Freddy Padilla de Leon announced to CBS that operators of Colombia's Special Forces Brigade were scheduled to be deployed to Afghanistan in either August or September 2009.[22] However the Colombians are not listed as part of the force as of June 2011.

Since 2006 the insurgency of the Taliban has been intensifying, especially in the southern Pashtun parts of the country, areas that were the Taliban's original power base in the Afghan Civil War.

In NATO-ISAF took over command of the south on 31 July 2006, British, Dutch, Canadian and Danish ISAF soldiers in the provinces of Helmand, Uruzgan and Kandahar have come under almost daily attack. British commanders say the fighting for them is the fiercest since the Korean War, fifty years ago. BBC reporter Alistair Leithead, embedded with the British forces, called it in an article "Deployed to Afghanistan's hell".[26]

Because of the security situation in the south, NATO-ISAF commanders have asked member countries to send more troops. On 19 October, for example, the Dutch government decided to send more troops, because of the many attacks by suspected Taliban on their Task Force Uruzgan, which makes it very difficult to complete the reconstruction work they came to accomplish.

ISAF and the illegal opium economy 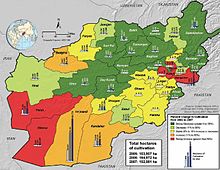 Prior to October 2008, ISAF had only served an indirect role in fighting the illegal opium economy in Afghanistan through shared intelligence with the Afghan government, protection of Afghan poppy crop eradication units and helping in the coordination and the implementation of the country's counter narcotics policy. Dutch ISAF forces have, for example, used military force to protect eradication units that came under attack.

Crop eradication often affects the poorest farmers who have no economic alternatives on which to fall back. Without alternatives, these farmers can no longer feed their families, causing anger, frustration and social protest. Thus, being associated with this counter productive drug policy, the ISAF soldiers on the ground find it difficult to gain the support of the local population.[27]

Though problematic for NATO, this indirect role has allowed NATO to avoid the opposition of the local population who depend on the poppy fields for their livelihood. In October 2008, NATO altered its position in an effort to curb the financing of insurgency by the Taliban. Drug laboratories, and drug traders became the targets, and not the poppy fields themselves.[28]

In order to appease France, Italy and Germany, the deal involved the participation in an anti-drugs campaign only of willing NATO member countries, was to be temporary, and was to involve cooperation of the Afghans.[28]

On 10 October 2008, during a news conference, after an informal meeting of NATO Defence Ministers in Budapest, Hungary, NATO Spokesman James Appathurai said:[29]

ISAF military casualties, and the civilian casualties caused by the war and Coalition/ISAF friendly fire, have become a major political issue, both in Afghanistan and in the troop contributing nations. Increasing civilian casualties threaten the stability of President Hamid Karzai's government.

ISAF command structure as of 2010 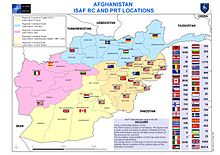 Throughout the four different regional stages of ISAF the number of Provincial Reconstruction Teams began growing. The expansion of ISAF, during October 2006, to all provinces of the country brought the total number of teams to twenty-four (24). The teams are led by different members of the NATO-ISAF mission. Another new PRT at Wardak was installed in November 2006, which is led by Turkey. This brought the number to 25. The overall NATO-ISAF mission is led by the Allied Joint Force Command Brunssum, at Brunssum, Netherlands.[30]

The main HQ is located in the capital city of Kabul. There are six (6) Regional Commands, each with subordinate Task Forces and Provincial Reconstruction Teams (as of October 2010):

The lower strength numbers of the ISAF forces are as of 6 October 2008.[31] The numbers also reflect the situation in the country. The north and west are relatively calm, while ISAF and Afghan forces in the south and east are almost under daily attack. 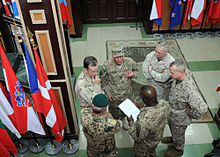 Construction of Camp Marmal at Mazar-i-Sharif. 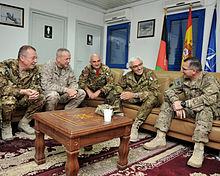 Meeting of Italian and U.S. commanders at Regional Command West HQ in Herat.

All NATO members have contributed troops to the ISAF, as well as some other partner states of the NATO. The numbers are based in part from the NATO when more recent numbers are available they are given.

All troop figures are as of latest ISAF/NATO Placemat, and are current as of 18 October 2011. Source ISAF Website.[41]

Soldiers from the Canadian Grenadier Guards in Kandahar Province. 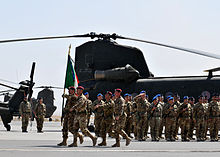 Romanian soldiers in southern Afghanistan in 2003.

Visiting politicians of Spain with soldiers of the Spanish army in 2010.

Convoy of U.S. forces passing by in Kapisa Province.

53 soldiers of mechanized infantry are holding outpost in Tarin Kowt, Uruzgan Province. 5 personnel are in OMLT team, 4 explosives disposal specialists are part of EOD PALADIN-S Team. 2 personnel are part of reconstruction team in Tarim Kowt. 12 officers are members of commanding staff in - HQ ISAF IJC, RC-S, KAF a PALADIN. In 2011 elements of 5th Special Forces Regiment will be deployed to Afghanistan and will take part in special operations.[83]