/ˈhwiːtɪər/) are passerine birds of the genus Oenanthe. They were formerly considered to be members of the thrush family Turdidae, but are now more commonly placed in the flycatcher family Muscicapidae. This is an Old World group, but the Northern Wheatear has established a foothold in eastern Canada and Greenland and in western Canada and Alaska.

The name "wheatear" is not derived from "wheat" or any sense of "ear", but is a 16th-century linguistic corruption of "white" and "arse", referring to the prominent white rump found in most species.[1] 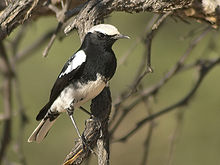