Clément Ader (2 April 1841 – 5 March 1925) was a French inventor and engineer born in Muret, Haute Garonne, and is remembered primarily for his pioneering work in aviation.

Ader was an innovator in a number of electrical and mechanical engineering fields. He originally studied electrical engineering, and in 1878 improved on the telephone invented by Alexander Graham Bell. After this he established the telephone network in Paris in 1880. In 1881, he invented the "théâtrophone", a system of telephonic transmission where listeners received a separate channel for each ear, enabling stereophonic perception of the actors on a set; it was this invention which gave the first stereo transmission of opera performances, over a distance of 2 miles (3 km) in 1881.[1] In 1903, he devised a V8 engine for the Paris-Madrid race, but although three or four were produced, none were sold.[2]

Following this, he turned to the problem of mechanical flight and until the end of his life gave much time and money to this. Using the studies of Louis Pierre Mouillard (1834–1897) on the flight of birds, he constructed his first flying machine in 1886, the Éole. It was a bat-like design run by a lightweight steam engine of his own invention, with 4 cylinders developing 20 horsepower (15 kW), driving a four-blade propeller. The engine weighed no more than 4 kg/kW (7 pounds per horsepower). The wings had a span of 14 metres and were equipped with a system of warping. All-up weight was 300 kg (650 pounds). On 9 October 1890, Ader attempted a flight of the Éole. It is accepted that the aircraft took off, reaching a height of 20 cm, and flew uncontrolled for approximately 50 m (160 ft), [3][4][5] 13 years before the Wright Brothers. 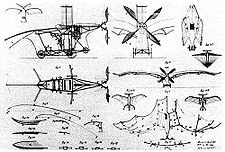 Ader undertook the construction of a second aircraft he called the Avion II, also referred to as the Zephyr or Éole II. Most sources agree that work on this aircraft was never completed, and it was abandoned in favour of the Avion III. The Ader's later claim that he flew the Avion II in August 1892 for a distance of 100 metres in Satory near Paris,[6] was never widely accepted.[3] 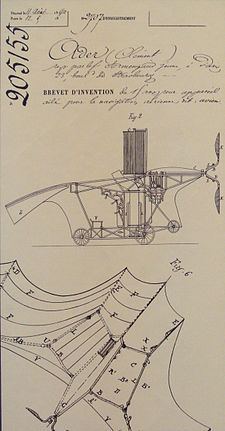 Ader's progress attracted the interest of the minister of war, Charles de Freycinet. With the backing of the French War Office, Ader developed and constructed the Avion III. It was like an enormous bat made of linen and wood, with a 16-yard (15 m) wingspan, equipped with two four bladed tractor propellers , each powered by a steam engine of 30 hp (22 kW). Using a circular track at Satory, Ader carried out taxying trials on 12 October 1897 and two days later attempted a flight. After a short run the machine was caught by a gust of wind, slewed off the track, and came to a stop. After this the French army withdrew its funding, but kept the results secret. After the Wright brothers made their flight, the commission released in November 1910 the official reports on Ader's attempted flights, stating that they were unsuccessful. [7]

Clément Ader remained an active proponent of the development of aviation. In 1909 he published L'Aviation Militaire, a very popular book which went through 10 editions in the five years before the First World War. It is notable for its vision of air warfare and its foreseeing the form of the modern aircraft carrier, with a flat flight deck, an island superstructure, deck elevators and a hangar bay. His idea for an aircraft carrier was relayed by the US Naval Attaché in Paris[8] and were followed by the first trials in the United States in November 1910.

An airplane-carrying vessel is indispensable. These vessels will be constructed on a plan very different from what is currently used. First of all the deck will be cleared of all obstacles. It will be flat, as wide as possible without jeopardizing the nautical lines of the hull, and it will look like a landing field.
—Clément Ader, L'Aviation Militaire, 1909 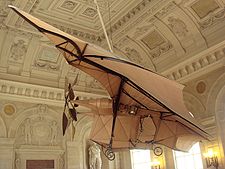 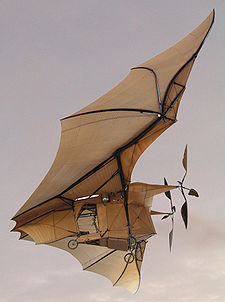 Ader is still admired for his early powered flight efforts, and his aircraft gave the French language the word avion for a heavier-than-air aircraft. In 1938, France issued a postage stamp honoring him. Airbus named one of its aircraft assembly sites in Toulouse after him.