Slow-wave sleep (SWS), often referred to as deep sleep, consists of stages 3 and 4 of non-rapid eye movement sleep, according to the Rechtschaffen & Kales (R & K) standard of 1968.[1] As of 2008, the American Academy of Sleep Medicine (AASM) has discontinued the use of stage 4,[2][3][4] such that the previous stages 3 and 4 now are combined as stage 3. An epoch (30 seconds of sleep) which consists of 20% or more slow wave (delta) sleep, now is considered to be stage 3.

The highest arousal thresholds (i.e. difficulty of awakening, such as by a sound of a particular volume) are observed in deep sleep. A person will typically feel more groggy when awoken from slow-wave sleep, and indeed, cognitive tests administered after awakening then indicate that mental performance is somewhat impaired for periods of up to 30 minutes or so, relative to awakenings from other stages. This phenomenon has been called "sleep inertia."

After sleep deprivation there is a sharp rebound of SWS, suggesting its homeostatic control.

The major factor determining how much slow-wave sleep is observed in a given sleep period is the duration of preceding wakefulness, likely related to accumulation of sleep-promoting substances in the brain. Some of the few factors known to increase slow-wave sleep in the sleep period that follows them include body heating (as by immersion in a hot tub), high carbohydrate ingestion, and intense prolonged exercise. The latter probably exerts its influence by increasing body temperature.[citation needed]

In addition to these factors, the duration of SWS periods can be increased by ingestion of THC, SSRIs, and other drugs.[citation needed] In instances such as these, TST (Total Sleep Time) is often unaffected due to circadian rhythms and/or a person's alarm clock and early morning obligations. This increase of SWS can lead to increased REM latency and a decrease in REM period durations. If the total time spent in REM is decreased long enough and repeatedly over a substantial number of nights a "REM rebound" will occur in response to removal of its inhibitor. An increase in REM is believed to produce symptoms of depression and bipolar disorder in many patients for an amount of time relative to the severity of the previous "REM suppression." It is debatable whether or not this could explain the return in symptoms of depression disorder after removal of SSRI medications.

Certain substances, such as benzodiazepines (e.g. Ativan, Valium, Klonopin) seem to have the reverse effect on the time spent in SWS.[citation needed] Instead of lengthening SWS (as do the substances mentioned above), they are known to shorten the time. While these sedatives can increase sleep duration or shorten the time it takes before sleep-onset occurs, they tend to deprive patients of deep sleep.

The chemical gamma-Hydroxybutyric acid (GHB) is known to promote SWS.[citation needed] In the United States, the Food and Drug Administration permits the use of GHB under the trade name Xyrem to reduce cataplexy attacks and excessive daytime sleepiness in patients with narcolepsy.

"New research from Brigham and Women's Hospital (BWH) conducted in collaboration with California Pacific Medical Center and six clinical sites across the U.S. finds that reduced slow wave sleep(SWS) is a powerful predictor for developing high blood pressure in older men. This research is published in "Hypertension: Journal of the American Heart Association.""[5] 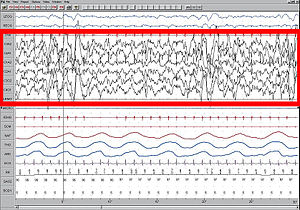 Large 75-microvolt (0.5–2 Hz) delta waves predominate the electroencephalogram (EEG). Stage N3 is defined by the presence of 20% delta waves in any given 30-second epoch of the EEG during sleep, by the current 2007 AASM guidelines.[4]

Slow-wave sleep (SWS) is an active phenomenon probably brought about by the activation of serotonergic neurons of the raphe system.

The slow wave seen in the cortical EEG is generated through thalamocortical communication through the thalamocortical neurons.[6] In the TC neurons this is generated by the "slow oscillation" and is dependent on membrane potential bistability, a property of these neurons due to an electrophysiological component known as I t Window. I t Window is due to the overlap underneath activation/inactivation curves if plotted for T-type calcium channels (inward current). If these two curves are multiplied, and another line superimposed on the graph to show a small Ik leak current (outward), then the interplay between these inward (I t Window) and outward (small Ik leak), three equilibrium points are seen at −90, −70 and −60 mv, −90 and −60 being stable and −70 unstable. This property allows the generation of slow waves due to an oscillation between two stable points. It is important to note that in in vitro, mGluR must be activated on these neurons to allow a small Ik leak, as seen in in vivo situations.