Merseburg is a town in the south of the German state of Saxony-Anhalt on the river Saale, approx. 14 km south of Halle (Saale). It is the capital of the Saalekreis district. It had a diocese founded by Archbishop Adalbert of Magdeburg. The University of Merseburg is located within the town.

Merseburg was first mentioned in 850. King Henry the Fowler built a royal palace at Merseburg; in the 933 Battle of Riade, he gained his great victory over the Hungarians in the vicinity.

Thietmar of Merseburg became the first bishop of the newly-created bishopric of Prague in Bohemia, appointed in 973. Prague had been part of the archbishopric of Mainz for a hundred years before that. From 968 until the Protestant Reformation, Merseburg was the seat of the bishop of Merseburg, and in addition to being for a time the residence of the margraves of Meissen, it was a favorite residence of the German kings during the 10th, 11th and 12th centuries. Fifteen diets were held here during the Middle Ages, when its fairs enjoyed the importance which was afterwards transferred to those of Leipzig. The town suffered severely during the German Peasants' War and also during the Thirty Years' War.

From 1657 to 1738 Merseburg was the residence of the dukes of Saxe-Merseburg, after which it fell to the Electorate of Saxony. In 1815 following the Napoleonic Wars, the town became part of the Prussian Province of Saxony.

Merseburg is the site where the Merseburg Incantations were rediscovered in 1841. Written down in Old High German, they are hitherto the only preserved German documents with a heathen theme. One of them is a charm to release warriors caught during battle, and the other one is a charm to heal a horse's sprained foot.

At the beginning of the 20th century, Merseburg was transformed into an industrial site, which is largely due to the pioneering work done by people like Carl Bosch and Friedrich Bergius, who laid down the scientific fundamentals of the catalytic high-pressure ammonia synthesis from 1909 to 1913. Enterprises, too, blazed a trail in the course of the transformational process. Ultimately, a chemical park emerged at nearby Leuna which is one of the most modern sites of its kind in Europe with high ecological standards. 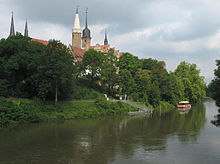 Among the notable buildings of Merseburg are the Merseburg Cathedral of St John the Baptist (founded 1015, rebuilt in the 13th and 16th centuries) and the episcopal palace (15th century).

The Cathedral-and-Palace Ensemble with its fascinating palace garden (Schlossgarten), Merseburg House of Trades with a cultural stage and the German Museum of Chemistry, Merseburg, all bear witness to Merseburg’s history. The Merseburg Palace Festival with the Historical Pageant, the International Palace-Moat Concerts, Merseburg Organ Days and the Puppet Show Festival Week are highlights celebrated every year.

Merseburg is twinned with: