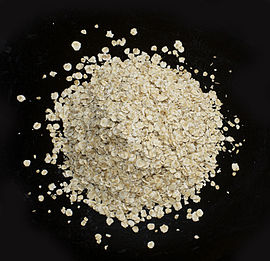 Rolled oats, a type of oatmeal

The oat grains are de-husked by impact, then warmed and cooled to stabilize the "Oat groats", the seed inside the husk. The process of heating produces a nutty flavour to the oats.[1] These oat groats may be milled to produce fine, medium or coarse oatmeal.[2] Rolled oats are steamed and flattened whole oat groats. Steel cut oats may be small and broken groats from the de-husking process, these may be steamed and flattened to produce smaller rolled oats. Quick-cooking rolled oats (quick oats) are cut into small pieces before being steamed and rolled. Instant oatmeal is pre-cooked and dried, usually with sweetener and flavouring added.[3][4] Both types of rolled oats may be eaten uncooked as in muesli or may be cooked to make porridge. It is also used as an ingredient in oatmeal cookies and oat cakes, or as an accent, as in the topping on many oat bran breads and the coating on Caboc cheese. Oatmeal is also sometimes porridge with the bran or fibrous husk as well as the oat kernel or groat.[5] In some countries rolled oats are eaten raw with milk and sugar or raisins. Oatmeal is also used as a thickening agent in savoury Arabic/Egyptian thick meat plus vegetable soups.

There has been increasing interest in oatmeal in recent years because of its health benefits. Daily consumption of a bowl of oatmeal can lower blood cholesterol, because of its soluble fiber content.[6] After it was reported that oats can help lower cholesterol, an "oat bran craze"[7][8] swept the U.S. in the late 1980s, peaking in 1989. The food craze was short-lived and faded by the early 1990s. The popularity of oatmeal and other oat products increased again after the January 1997 decision by the Food and Drug Administration that food with a lot of oat bran or rolled oats can carry a label claiming it may reduce the risk of heart disease when combined with a low-fat diet. This is because of the beta-glucan in the oats. Rolled oats have long been a staple of many athletes' diets, especially weight trainers; given oatmeal's high content of complex carbohydrates and water-soluble fibre that encourages slow digestion and stabilizes blood-glucose levels. Oatmeal porridge also contains more B vitamins and calories than other kinds of porridges.[9]

Oatmeal has a long history in Scottish culinary tradition because oats are better suited than wheat to Scotland's short, wet growing season. Oats became the staple grain of that country. The Ancient universities of Scotland had a holiday called Meal Monday to permit students to return to their farms and collect more oats for food.

Samuel Johnson referred, disparagingly, to this in his dictionary definition for oats: "A grain, which in England is generally given to horses, but in Scotland supports the people." His biographer, James Boswell, noted that Lord Elibank was said by Sir Walter Scott to have retorted, "Yes, and where else will you see such horses and such men?"[10]

A common method of cooking oatmeal in Scotland is to soak it overnight in salted water and cook on a low heat in the morning for a few minutes until the mixture thickens.

In Scotland, oatmeal is created by grinding oats into a coarse powder.[11] Various grades are available depending on the thoroughness of the grinding, including Coarse, Pin(head) and Fine oatmeal.[citation needed] The main uses are:

The Germans and Swiss prepare a cold oatmeal called Bircher Muesli as a breakfast cereal based on uncooked oats, fruit and nuts. The oats are combined with milk, honey and spices (e.g. cinnamon), mixed and soaked in the refrigerator overnight to soften (unnecessary with already softened rolled oats). In the morning before eating, nuts and fruit are added. The dish is not cooked.

In the U.S. state of Vermont, oatmeal making has a long tradition originating with the Scottish settlement of the state. While there are variations, most begin with heavy steel cut oats. The oats are soaked overnight in cold water, salt, and maple syrup. Early the next morning, before beginning farm chores the cook will add ground nutmeg, ground cinnamon, and sometimes ground ginger. The pot is placed over heat and cooks for upwards of 90 minutes, being served after the chores with cream, milk, or butter. As most contemporary Vermonters no longer have farm chores, the recipe is simplified to a briefer 10 to 30 minute cooking at a higher heat. Vermont leads the U.S. in per capita consumption of cooked oatmeal cereal.[14]