Ira Hamilton Hayes (January 12, 1923 – January 24, 1955) was a Pima Native American and an American Marine who was one of the six men immortalized in the iconic photograph of the flag raising on Iwo Jima during World War II.[1][2] Hayes was an enrolled member of the Gila River Indian Community in Sacaton, Arizona, and enlisted in the Marine Forces Reserve on August 24, 1942. He trained as a Paramarine and saw action in the Pacific Theatre of World War II. On February 19, 1945, Hayes participated in the landing at Iwo Jima and fought in the subsequent battle for the island. On February 23, Hayes, together with fellow Marines Rene Gagnon, Harlon Block, Franklin Sousley, and Mike Strank, and Navy Corpsman John Bradley, raised the American flag over Mount Suribachi, an event photographed by Joe Rosenthal.

As a result of Rosenthal's photograph, Hayes and the others became national heroes in the United States. He was instrumental in confirming the identity of one of his fellow Marines in the photograph, Harlon Block. Hayes was never comfortable with his new-found fame, however, and after his honorable discharge from the Marine Corps he descended into alcoholism. He died of exposure and alcohol poisoning on January 24, 1955 after a night of drinking, and was buried with full military honors at Arlington National Cemetery.

Hayes was often commemorated in art and film, both before and after his death. He is depicted in the Marine Corps War Memorial at Arlington National Cemetery, based on the famous photograph, and he portrayed himself in the 1949 film Sands of Iwo Jima. His tragic story was the subject of the 1961 film The Outsider, and inspired Peter La Farge's song "The Ballad of Ira Hayes". He was also depicted in the 2006 film Flags of Our Fathers.

Joseph Hayes was a World War I veteran who supported his family by subsistence farming and cotton harvesting.[4] Nancy Hayes was a devout Presbyterian and a Sunday school teacher at the Assemblies of God church in Sacaton.[4]

As a child, Hayes was remembered as being shy and sensitive by his family and friends. Sara Bernal, his first cousin, stated, "[Joseph Hayes] was a very quiet man, he would go days without saying anything unless you spoke to him first. The other Hayes children would play and tease me, but not Ira. He was quiet, and somewhat distant. Ira didn't speak unless spoken to. He was just like his father."[5] His boyhood friend Dana Norris stated, "Even though I'm from the same culture, I could never get under his skin. Ira had the characteristic of not wanting to talk. But we Pimas are not prone to tooting our own horns. Ira was a quiet guy, such a quiet guy."[5] Despite this, Hayes was a precocious child who displayed an impressive grasp of the English language, a language many Pimas did not know how to speak.[4] He was also a voracious reader, learning how to read and write by age four.[4]

In 1932, the family settled in Bapchule, Arizona, located approximately 12 miles northwest of Sacaton.[4] The Hayes children attended grade school in Sacaton and high school at the Phoenix Indian School in Phoenix, Arizona. Esther Monahan, one of his classmates, stated, "Ira wasn't like the other guys. He was shy and never talked to us girls. He was so much more shy than the other Pima boys. The girls would chase him and try to hug him and kiss him, like we did with all the boys. We'd catch the other boys, who enjoyed it. But not Ira. Ira would just run away."[6] After the attack on Pearl Harbor in Hawaii, Ira confided to his classmate Eleanor Pasquale that he was determined on serving in the United States Marine Corps.[6] Pasquale stated, "Every morning in school, [the students] would get a report on World War II. We would sing the anthems of the Army, Marines, and the Navy."[7] In June 1942, Hayes graduated at the Phoenix Indian School and returned to the reservation. 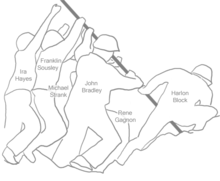 Hayes is pictured to the far left

On February 19, 1945, Hayes took part in the landing on Iwo Jima. He participated in the battle for the island and was among the group of Marines that took Mount Suribachi five days later on February 23, 1945.

The raising of the second American flag on Suribachi by five Marines: Ira Hayes, Rene Gagnon, Harlon Block, Franklin Sousley, and Mike Strank, and a Navy Corpsman, John Bradley, was immortalized by photographer Joe Rosenthal and became an icon of the war. Overnight, Hayes became a national hero, along with the two other survivors in the famous photograph, Rene Gagnon and John Bradley.

When Iwo Jima was secured by U.S. forces, Hayes was ordered to Washington, D.C. Together with the Navy Pharmacist's Mate John Bradley and Marine Private First Class Rene Gagnon, he was assigned to temporary duty with the Finance Division, U.S. Treasury Department, for appearances in connection with the Seventh War Bond Drive. 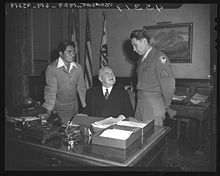 After the war, Hayes attempted to lead a normal civilian life. "I kept getting hundreds of letters. And people would drive through the reservation, walk up to me and ask, 'Are you the Indian who raised the flag on Iwo Jima?'"[9] Although he rarely spoke about the flag raising, he spoke about his service in the Marine Corps with great pride.

After returning home from the war, Hayes remained troubled that one of his friends, Harlon Block, one of the flag raisers who was killed in action days after, was mistaken for another man, Hank Hansen. Hayes later hitchhiked 1,300 miles from the Gila River Indian Community to Edward Frederick Block, Sr.'s farm in Weslaco, Texas in order to reveal the truth to Block's family. He was instrumental in having the controversy resolved, to the delight and gratitude of the Block family.

Ira Hayes appeared in the 1949 John Wayne film, Sands of Iwo Jima, along with fellow flag raisers John Bradley and Rene Gagnon. All three men played themselves in the film. Wayne hands the flag to be raised to the three men. (The actual flag that was raised on Mount Suribachi is used in the film.)

After the war, Hayes accumulated a record of 52 arrests for public drunkenness.[10] Referring to his alcoholism, he once said: "I was sick. I guess I was about to crack up thinking about all my good buddies. They were better men than me and they're not coming back. Much less back to the White House, like me."[9]

In 1954, after a ceremony where he was lauded by President Dwight D. Eisenhower as a hero, a reporter approached Hayes and asked him, "How do you like the pomp and circumstance?" Hayes hung his head and said, "I don't."[11]

Hayes' disquiet about his unwanted fame and his subsequent post-war problems were first recounted in detail by the author William Bradford Huie in The Outsider, published in 1959 as part of his collection Wolf Whistle and Other Stories. The Outsider was filmed in 1961, directed by former World War II veteran turned film director Delbert Mann and starring Tony Curtis.[12]

The 2006 film Flags of Our Fathers, directed by Clint Eastwood, suggests that Hayes suffered from posttraumatic stress disorder. 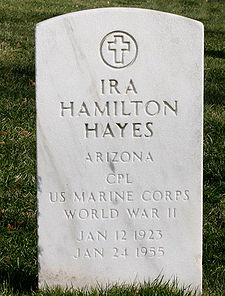 On the morning of January 24, 1955, Hayes was found dead, lying in his own blood and vomit, near an abandoned adobe hut in Sacaton, Arizona. He had been drinking and playing cards at a bar on the reservation with his friends and brothers Vernon and Kenneth. An altercation ensued between Hayes and a Pima named Henry Setoyant, and all left except Hayes and Setoyant.

The Pinal County coroner concluded that Hayes' death was caused by exposure and alcohol poisoning. However, his brother Kenneth still believes that the death resulted from the altercation with Setoyant. The Gila River Police Department did not conduct an investigation into Hayes' death and Setoyant denied any allegations of fighting with Hayes.[13]

In the 1961 film of his life, (starring Tony Curtis) The Outsider, his death is dramatized for the screen. He is shown freezing to death on an Arizona mountain top, after a night of drinking.

Hayes is buried in Section 34, Grave 479A at Arlington National Cemetery. At the funeral, fellow flag-raiser Rene Gagnon said of him: "Let's say he had a little dream in his heart that someday the Indian would be like the white man — be able to walk all over the United States."[14]

On November 10, 1993, the United States Marine Corps held a ceremony at the Iwo Jima Memorial commemorating the anniversary of the Corps. Of Ira Hayes, USMC Commandant General Carl Mundy said:

One of the pairs of hands that you see outstretched to raise our national flag on the battle-scarred crest of Mount Suribachi so many years ago, are those of a Native American ... Ira Hayes ... a Marine not of the ethnic majority of our population.

I would tell Ira Hayes that our Corps is what we are because we are of the people of America ... the people of the broad, strong, ethnic fabric that is our nation. And last, I would tell him that in the future, that fabric will broaden and strengthen in every category to make our Corps even stronger ... even of greater utility to our nation. That's a commitment of this commandant ... And that's a personal commitment of this Marine.

Portrayal in music, film and literature