Balsac the Jaws of Death

Balsac the Jaws of Death

Balsac the Jaws of Death is the rhythm guitarist in the rock band Gwar. He appears as a humanoid creature with a face resembling a bear-trap. Balsac is usually portrayed wielding a giant battleaxe. In contrast to the other bandmates, Balsac speaks with a pretentious British accent until Lust in Space, where he speaks with an American accent during an argument with Oderus Urungus on the track "Where is Zog?", though he also speaks without an accent during the argument in "Have You Seen Me" from The Road Behind EP. The character is a combination of two previous Gwar characters BalSac and Jaws of Death. 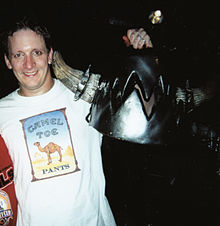 Mike Derks, out of costume, holding the Balsac head.

In the original Gwar lineup in 1985, Jaws of Death and BalSac were two different characters. Jaws of Death (played by Death Piggy guitarist Steve Douglas) wore a crude version of the familiar trap jaw BalSac the Jaws of Death wears, while BalSac (Chris Bopst) played bass and wore a simple open-face piece of spiked headgear. After several lineup changes, Douglas would return to the band as Balsac the Jaws of Death for the recording of Gwar's first album Hell-O, only to be replaced by Michael Derks shortly after.

Balsac has occasionally been featured as a vocalist. Balsac's vocals can be heard on the songs "Obliteration of Flab Quarv 7", from This Toilet Earth, and "Mary Anne" from We Kill Everything. Derks' first Gwar song was "Black and Huge," and the first song featuring him on vocals was "The Needle." "The Needle" was never released on a Metal Blade album, but it was a Slave Pit Single, and was re-recorded as "Escape From The Mooselodge" on We Kill Everything, featuring Oderus Urungus on vocals. "Black and Huge" was originally recorded after Hell-O was released in the United States.

Balsac was originally played by Chris Bopst, and at that time, Balsac was the band's bassist. It was Bopst who gave Balsac The Jaws of Death his full name. However, by the time Hell-O had been released, Beefcake and Balsac switched roles and Steve Douglas had replaced Bopst. Douglas played the character until soon after Hell-O was released when he passed the torch to Michael Derks. With the exception of a few gigs in Europe in 1991 where Balsac was played by Barry Ward, Derks has played the character ever since. Derks also runs the Gwar mailing list and has performed in Gwar spin-off bands X-Cops, Rawg, and the Dave Brockie Experience.

A large portion of Gwar's catalog was written (or co-written) by Derks, who has also contributed to the production of several songs.

According to the timeline of Slave Pit, Inc., Michael Derks joined the band in 1988, making him the second longest (after Dave Brockie) serving member of Gwar. The character is one of the two longest-serving, having been in every single incarnation of Gwar.

When asked how exactly he walks in his awkwardly shaped boots he replied, "it's hard, man." The boots in question are actually an optical illusion, with Derks's legs and feet going straight down, but the way the boots are made make it look as if his legs are bent backwards like a horse's leg. 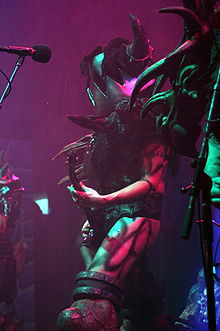 Mike Derks as Balsac the Jaws of Death live on stage

Derks currently plays ESP Guitars and Krank amplifiers. He seems to prefer guitars similar in shape to the Gibson Explorer (for a brief time, he actually played one) - most photographs are seen of him playing ESP's equivalent. He currently has a custom signature variant of the ESP EX series, which features a single emg 81 bridge pickup and a custom balsac graphic. In the video to "Immortal Corrupter," he is seen playing a yellow-to-black Washburn Dimebag Darrell 333 guitar with red lightning bolts. Only two people had this paint job - Derks and Dimebag Darrell himself. Derks' guitar was stolen after the August 16, 2002 Dave Brockie eXperience concert which was recovered and given back to him by a fan in 2010. He also owned (it was sold on eBay in 2005) a Steinberger P-series guitar, an instrument he seemed to like (though few of his fans thought it was a real guitar). He also played Fernandes guitars for a time in 1997-9. He has played through Fatboy, Crate, Marshall, and Mesa Boogie amplifiers in the past.