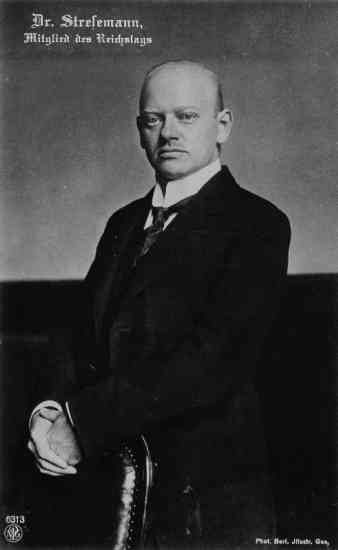 Stresemann's politics defy easy categorization. Today, he is generally considered one of the most important leaders of Germany and a staunch supporter of democracy in the fragile Weimar Republic. Further, he is noted as one of the first to envisage European economic integration. Arguably, his most notable achievement was reconciliation between Germany and France, for which he and received the Peace Prize. On the other hand, he supported anti-Polish policies, and engineered a trade war between Germany and Poland.

Stresemann was born in . He came from origins, as the son of a Berlin and . However, he attended the Universities of Berlin and Leipzig, studied and and received a in . He also became a for his .

In 1902 he founded the Saxon Manufacturers' Association. In 1903 he married Käthe Kleefeld, daughter of a wealthy Jewish Berlin businessman. At that time he was also a member of 's . In 1906 he was elected to the town council. Though he had initially worked in trade associations, Stresemann soon became a leader of the National Liberal Party in Saxony. In 1907, he was elected to the Reichstag, where he soon became a close associate of party chairman . However, he disagreed with the most conservative party members and lost his post in the party's executive committee in 1912. Later that year he lost both his Reichstag and town council seats. He returned to business and founded the German-American Economic Association. In 1914 he returned to the Reichstag. He was exempted from war service due to poor health.

The evolution of his political ideas appears somewhat erratic. Initially, in the , Stresemann was associated with the left wing of the National Liberals. During , he gradually moved to the right, expressing his support of the monarchy and Germany's expansionist goals. He was a vocal proponent of .

Stresemann briefly joined the after the war, but was expelled for his association with the right wing and his grudging support of the Weimar Republic. He then gathered most of the right wing of the old National Liberal Party into the ( _de. Deutsche Volkspartei, DVP), with himself as chairman. Most of its support came from middle class and upper class Protestants. The DVP platform promoted Christian family values, secular education, lower tariffs, opposition to welfare spending and agrarian subsides and hostility to "" (that is, the Communists, and also the ).

The DVP was initially seen, along with the , as part of the "national opposition" to the Weimar Republic, particularly for its ambivalent attitude towards the and the in 1920. However, Stresemann gradually moved to cooperation with the parties of the left and center - possibly in reaction to political murders like that of . However, he was a monarchist at heart.

In the Weimar Republic

On , in the midst of the , he was appointed Chancellor and Foreign Minister of a grand coalition government. As Chancellor, Stresemann went a long way towards resolving the crisis, but some of his moves - like his refusal to deal firmly with culprits of the - alienated the Social Democrats. They left the coalition and arguably caused its collapse on . Stresemann remained as Foreign Minister in the government of his successor, Centrist . He remained foreign minister for the rest of his life in eight successive governments ranging from the centre-right to the centre-left.

In the so-called year of crises (1923) he showed strength by calling-off the popular passive resistance at the Ruhr. Since Germany was no longer able to pay the striking workers, more and more money was printed, which finally led to hyperinflation. Stresemann ended this disastrous process by introducing a new currency, the Rentenmark, which reassured the people that the democratic system was willing and able to solve urgent problems.

(Year of Crises: Invasion of the Ruhr by the French, hyperinflation, communist uprisings in Thuringia and Saxony, and the Beer Hall Putsch started by Hitler in Munich.)

As Foreign Minister, Stresemann had numerous achievements. His first notable achievement was the of 1924, which reduced Germany's overall reparations commitment and reorganized the Reichsbank.

His second success was the Rhineland Pact with Britain, France, Italy, and Belgium, signed in October 1925 at Locarno. Germany officially recognized the post western border for the first time, and was guaranteed peace with France, and promised admission to the League of Nations and evacuation of the last Allied occupation troops from the Rhineland. Germany's eastern borders were guaranteed to Poland only by France, not by a general agreement.

After this reconciliation with the Versailles powers, Stresemann moved to allay the growing suspicion of the Soviet Union. The Treaty of Berlin signed in April 1926 reaffirmed and strengthened the of 1922. In September 1926, Germany was admitted to the as permanent member of the Security Council. This was a sign that Germany was quickly becoming a "normal" state and assured the Soviet Union of Germany's sincerity in the Treaty of Berlin.

Stresemann was co-winner of the Nobel Peace Prize in 1926 for these achievements,.

Germany signed the in August 1928. It renounced the use of violence to resolve international conflicts. Although Stresemann did not propose the pact, Germany's adherence convinced many people that Weimar Germany was a Germany that could be reasoned with. This new insight was instrumental in the of February 1929 which led to more reductions in German reparations payment.

Gustav Stresemann's success owed much to his friendly personal character and his willingness to be pragmatic. He was close personal friends with many influential foreigners. The most noted was Briand, with whom he shared the Peace Prize. [Annelise Thimme. "Stresemann and Locarno", 74]

Stresemann was not, however, in any sense pro-French. His main preoccupation was how to free Germany from the burden of reparations payments to Britain and France, imposed by the Treaty of Versailles. His strategy for this was to forge an economic alliance with the . The U.S. was Germany's main source of food and raw materials, and one of the Germany's largest export markets for manufactured goods. Germany's economic recovery was thus in the interests of the U.S., and gave the U.S. an incentive to help Germany escape from the reparations burden. The Dawes and Young plans were the result of this strategy. Stresemann had a close relationship with , who was Secretary of Commerce in 1921-28 and President from 1929. This strategy worked remarkably well until it was derailed by the after Stresemann's death. [Adam Tooze, "Wages of Destruction", 6]

During his period in the foreign ministry, Stresemann came more and more to accept the Republic, which he had at first rejected. By the mid-1920s, having contributed much to a (temporary) consolidation of the feeble democratic order, Stresemann was regarded as a "Vernunftrepublikaner" (republican by reason) - someone who accepted the Republic as the least of all evils, but was in their heart still loyal to the monarchy. The conservative opposition criticized him for his supporting the republic and fulfilling too willingly the demands of the Western powers. Along with and others, he was attacked as a "Erfüllungspolitiker" ("fulfillment politician").

Stresemann is remembered for his role in consolidating liberal democracy in Germany and concluding peace with his western neighbors. On the other hand, his position on the Polish-German border was as uncompromising as any German politician's of that time, except for the CommunistsFact|date=March 2008.

In 1925, when he first proposed an agreement with France, he made it clear that in doing so he intended to "gain a free hand to secure a peaceful change of the borders in the East and [...] concentrate on a later incorporation of German territories in the East". [Stresemann in an article for the "", , quoted after , "200 Jahre deutsche Polenpolitik", Frankfurt am Main: Suhrkamp, 1972, p. 220.] In the same year, while Poland was in a state of political and economic crisis, Stresemann began a against the country. Stresemann hoped for an escalation of the Polish crisis, which would enable Germany to regain territories ceded to Poland after World War I, and he wanted Germany to gain a larger market for its products there. So Stresemann refused to engage in any international cooperation that would have "prematurely" restabilized the Polish economy. In response to a British proposal, Stresemann wrote to the German ambassador in London: " [A] final and lasting recapitalization of Poland must be delayed until the country is ripe for a settlement of the border according to our wishes and until our own position is sufficiently strong". According to Stresemann's letter, there should be no settlement "until [Poland's] economic and financial distress has reached an extreme stage and reduced the entire Polish body politic to a state of powerlessness". [Stresemann in a letter to the German ambassador in London, quoted after Broszat (see above), p. 224.]

Gustav Stresemann died of a in October 1929 at the age of 51. His massive gravesite is situated on the Luisenstadt Cemetery at Südstern in Berlin Kreuzberg. His sudden and premature death, as well as the death of his "pragmatic moderate" French counterpart in 1932, and the assassination of Briand's successor in 1934, left a vacuum in European statesmanship that further tilted the slippery slope towards .

Gustav and Käthe had two sons, Wolfgang and Joachim Stresemann.

Long Hanborough in , , has a small plaque to commemorate his life.

Changes
*, - The Social Democratic Ministers Sollmann, Radbruch and Schmidt resigned. Sollmann was succeeded as Interior Minister by (DVP). The others were not replaced before the ministry fell.