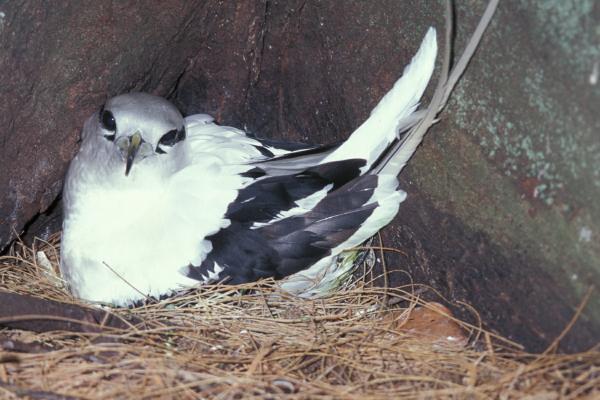 image_width = 240px
regnum = ia
phylum = Chordata
classis = Aves
ordo =
familia = Phaethontidae
genus = "Phaethon"
species = "P. lepturus"
binomial = "Phaethon lepturus"
binomial_authority = Daudin, 1802The White-tailed Tropicbird "Phaethon lepturus," is a , smallest of three closely related s of the tropical oceans and smallest member of the order . It occurs in the tropical Atlantic, western and s. It also breeds on some islands, and a few pairs have started nesting recently on , joining the colony. In addition to the tropical Atlantic, it nests as far north as , where it is locally called a "".

The White-tailed Tropicbird breeds on tropical islands laying a single egg directly onto the ground or a cliff ledge. It disperses widely across the oceans when not breeding, and sometimes wanders far. It feeds on fish and squid, caught by surface plunging, but this species is a poor swimmer. The call is a high screamed "keee-keee-krrrt-krrt-krrt".

The adult White-tailed Tropicbird is a slender, mainly white bird, 71-80 cm long including the very long central tail feathers, which double its total length. The wingspan is 89-96 cm, and there is a black band on the inner wing There is black through the eye and the bill is orange-yellow to orange red. The bill colour, pure white back and black wing bar distinguish this species from Red-billed.

Sexes are similar, although males average longer tailed, but juveniles lack the tail streamers, have a green-yellow bill, and a finely barred back.