The Sterling Hall Bombing that occurred on the University of Wisconsin–Madison campus on August 24, 1970 was committed by four young people as a protest against the University's research connections with the US military during the Vietnam War. It resulted in the death of a university physics researcher and injuries to three others.

Sterling Hall is a centrally located building on the University of Wisconsin–Madison campus. The bomb, set off at 3:42AM on August 24, 1970, was intended to destroy the Army Mathematics Research Center (AMRC) housed on the 2nd, 3rd, and 4th floors of the building. It caused massive destruction to other parts of the building and nearby buildings as well. It resulted in the death of the researcher Robert Fassnacht, injured three others and caused significant destruction to the physics department and its equipment.[1][2][3] Neither Fassnacht nor the physics department itself were involved with or employed by the Army Mathematics Research Center. The bombers used a stolen Ford Econoline van filled with close to 2,000 pounds (910 kg) of ANFO (i.e., ammonium nitrate and fuel oil).[4] Pieces of the van were found on top of an eight-story building three blocks away and 26 nearby buildings were also damaged; however, the targeted AMRC was scarcely damaged.[5] Total damage to University of Wisconsin–Madison property was over $2.1 million as a result of the bombing.[6]

During the Vietnam War, the 2nd, 3rd and 4th floors of the southern (east-west) wing of Sterling Hall housed the Army Mathematics Research Center (AMRC). This was an Army-funded think tank, directed by J. Barkley Rosser, Sr.

The staff at the center, at the time of the bombing, consisted of about 45 mathematicians, about 30 of them full-time. Rosser was well known for his research in pure mathematics, known for research in logic (Rosser's trick, the Kleene–Rosser paradox, and the Church-Rosser theorem) and in number theory (Rosser sieve). Rosser had been the head of the U.S. ballistics program during World War II and also had contributed to research on several missiles used by the U.S. military.

The money to build a home for AMRC came from the Wisconsin Alumni Research Foundation (WARF) in 1955. Their money built a 6-floor addition to Sterling Hall. In the contract to work at the facility, it was required that mathematicians spend at least half their time on U.S. Army research.

Rosser publicly minimized any military-role of the center and implied that AMRC pursued mathematics, including both pure and applied mathematics. The University of Wisconsin student newspaper, The Daily Cardinal, obtained and published quarterly reports that AMRC submitted to the Army. The Cardinal published a series of investigative articles making a convincing case that AMRC was pursuing research that was directly pursuant to specific US Department of Defense requests, and relevant to counterinsurgency operations in Vietnam. AMRC became a magnet for demonstrations, in which protesters chanted "U.S. out of Vietnam! Smash Army Math!"

The bomb missed its target of the AMRC. The truck was pulled up beside a physics laboratory on the floor below the AMRC, destroying that laboratory. One physics researcher was killed and another seriously injured. The AMRC lost only one day's work.[citation needed]

The bombers were Karleton Armstrong, Dwight Armstrong, David Fine, and Leo Burt. They called themselves the "New Year's Gang", a name which was derived from a previous exploit from New Year's Eve 1969. Dwight and Karl, with Karl's girlfriend Lynn Schultz driving the getaway car, stole a small plane from Morey Field in Middleton. Dwight and Karl dropped homemade explosives on the Badger Army Ammunition Plant, but the explosives failed to detonate. They successfully landed the plane at another airport and escaped. Before the Sterling Hall bombing, Karl committed several other acts of terrorism, including arson attacks on ROTC installation at the Red Gym and one meant for the state Selective Service headquarters which instead hit the UW Primate Research Center. Karl also attempted to plant explosives at the Prairie du Sac electric substation which supplied power to the ammunition plant, but was frightened off by the night watchman.[3] 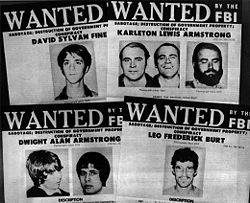 Karl was oldest of the bombers, and had been admitted into the University of Wisconsin–Madison in 1964. He was radicalized by the Vietnam War and quit school a year later. He took on odd jobs for the next few years, and was re-accepted into the university in 1967. That fall he was witness to violence between protesters and police on October 18, 1967 when the Dow Chemical Company arranged for job interviews with students on campus and many students protested and blocked potential interviewers from the building where the interviews were being held.[3]

After the bombing, he went into hiding until he was caught on February 16, 1972 in Toronto. He was sentenced to 23 years in prison, but served only seven years.[7] After this release, Armstrong returned to Madison, where he operated a juice cart called Loose Juice on the library mall just four blocks from Sterling Hall. In the early 2000s he also owned a deli called Radical Rye on State Street near the UW–Madison campus until it was displaced by the development of the Overture Center.[8][9]

In a 1986 interview about the attack, Armstrong said,

The younger brother of Karl, Dwight was 19 at the time of the bombing. After the bombing, he lived in a commune in Toronto, Ontario, where he used the name "Virgo". After a few months he left the commune, went to Vancouver and then re-appeared in San Francisco where he connected with the Symbionese Liberation Army (SLA), which was holding Patty Hearst at the time. It is believed he was not active in the SLA. He returned to Toronto and was arrested there on April 10, 1977. He pleaded guilty to the bombing, was sentenced to seven years in prison, and served three years before being released.

In 1987, he was arrested and then later convicted and sentenced to ten years in prison for conspiring to distribute amphetamines in Indiana.[10] After being released from prison, he returned to Madison and worked for Union Cab until January 2001 when he purchased the Radical Rye Deli with his brother Karl.[9][11]

A 1960s Ford van, similar to the van used in the bombing.

David Fine came to Madison as a freshman in 1969 at the age of 17. He wrote for the campus newspaper The Daily Cardinal, and associated with the other writers. He met Karl Armstrong for the first time in the summer of 1970.

Being 18 years old at the time of the bombing, he was the youngest of the four bombers. He was captured in San Rafael on January 7, 1976. He was sentenced to seven years in federal prison for his part in the bombing, and he served three years.[3]

In 1987, after passing the Oregon Bar exam, Fine was denied admission to the Bar on the grounds that "he had failed to show good moral character." Fine appealed the decision to the Supreme Court of Oregon which upheld the decision. In its decision the court wrote:

"He has not shown himself to be a credible person and did not establish that he now has the good moral character required to practice law. We base our decision on applicant's present statements about his past acts. We recognize that persons can and do reform. However, in this case applicant's deceitful, self-serving conduct persisted at the time of the hearing."[14]

Leo Burt was 22 years old, and worked at the Daily Cardinal. Burt came to Wisconsin following his interest in crew.[15] He introduced David Fine and Karl Armstrong to each other in July 1970.

After the bombing Burt fled to Canada with Fine,[16] and as of September 2010 remains at large,[17] though at that time there were new leads on his possible whereabouts.[18]

Plaque on the south side of Sterling Hall. Dedicated on May 18, 2007.
Main article: Robert Fassnacht

Robert Fassnacht was a 33-year-old post-doctoral researcher at the University of Wisconsin–Madison. On the night and early morning of August 23/24, 1970, he had gone to the lab to finish up work before leaving on a family vacation.[18] He was involved in research in the field of superconductivity. At the time of the explosion, Fassnacht was in his lab located in the basement level of Sterling Hall. He was monitoring an experiment when the explosion occurred.[19] Rescuers found him face down in about a foot of water.

He was survived by his wife, Stephanie, and their three children, a three-year-old son, Christopher, and twin one-year-old daughters, Heidi and Karin.

Also injured was David Schuster, a South African graduate student, who suffered fractured ribs and a broken eardrum, amongst other injuries,[18] and had to be dug out of the rubble by firefighters, after his professor, Henry Barschall, had to be physically restrained from going in himself.

Barschall's laboratory was destroyed by the bombing—and the records of 25 years of his research, measuring nuclear cross-sections under neutron bombardment, were destroyed, there having been no off site data storage.