Gavar (Armenian: Գավառ), is a city and the provincial capital of the Armenian province of Gegharkunik. It was known as Nor Bayezet or Novyi Bayazet until 1959, then Kamo (named in honour of Bolshevik of the same name) until 1996. The town is situated in the mountains with an average altitude of 2000 meters above sea level, on a distance of 98 kilometers to the east of the capital Yerevan. 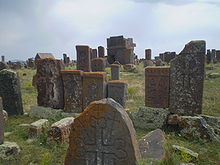 Gavar lies in the Armenian Highlands, just few miles away from the western shores of Lake Sevan. The city was founded in 1830 by migrants from the Ottoman Empire city of Bayazet (Armenian Daroink), and named "New Bayazit". It achieved city status in 1850.

Despite its relatively modern rebirth, the area has an ancient past. Fabled monuments dating back to the Bronze Age adorn the region, a testimony to the presence of Armenians in the region for thousands of years.

On the western part of the hill, located at the town center there are remnants of cyclopean fortress dating back to the early iron age. It is supposed that the fortress was the royal capital of the Urartian Velikukhi region. It was surrounded by more than 22 small fortresses. King Sarduri II, after having invaded Velikukhi and conquering the fortress, the fortress was renamed "Khaldi City" by his son Rusa II.[2]

Tombs of 4000 years old were found in the Gavar Theatre square. Small medieval monuments; cross-stones, gravestones and a chapel were also found in the city. Over the centuries, Gavar underwent countless destructions with the latest in the 17th century when it was ruined by Shah Abbas I of Persia.

After achieving the status of an urban settlement in 1950, the city progressed gradually over the years. It was once home to 36,400 people[3] but the population has declined to 23,302 as reported in the 2001 census. Much of the Soviet era infrastructure has failed and the industrial capacity has floundered. However, the local economy is improving at a slow rate as some businessmen are returning to Gavar from abroad with the hope of gaining new chances for investments. Major local manufacturers include electronics and machinery plants, and textile mills which are located in and around Gavar.

Religion is very important for the people of Gavar. The population of the town is Christian and belongs to the Armenian Apostolic Church. The church of the Holy Mother of God was built in the centre of the town by Bishop "Khoren Muradbeghian" in 1905 with help of the local population. Until recently it was considered to be the tallest church in Armenia. 4 kilometers north of Gavar, there is the Noraduz cemetery which contains a large number of impressive medieval khachkars (cross-stones). Hayravank Monastery of the 9th century is very close to Gavar.

Education continues to be one of the main values in the society of Gavar. A literacy rate of 99% was reported as early as 1960. Nowadays, there are 9 public education schools, 6 nursery schools, 4 specialized technical intermediate colleges, 1 sports school, 2 music and art schools, 1 special school for children with special educational needs and 1 university in the town of Gavar.

The Gavar State University was opened in 1993 after Armenia declared independence. It is a major educational centre for the Gegharkunik region with five faculties: Philology, Natural Sciences, Humanities, Economics and Education. Today, more than 2,400 students are attending those programmes.

The Gavar Special School which is the only school for mentally and physically handicapped children in the region, is currently carrying out steps towards improvement and development with the assistance of its partners and sponsors, so it can become the premier school for special children in Armenia.

Gavar has a city portal which is used by many people outside of Gavar. The name of the portal is Kyavar.com as the locals pronounce the name of the city with a "ky" sound instead of a "g" sound at the beginning of the name.

One of the Human Rights Library Network (HRLN) libraries of the Armenian Constitutional Right-Protective Centre (ACRPC) is located in Gavar.

Gavar cuisine is as ancient as the history of Armenia, it is closely related to eastern cuisine, various spices, vegetables, fish, and fruits combination.

Kyavari Kyufta (kofta of Gavar), the town's most favourite dish, is made from minced meat spiced with onions and rolled into balls before boiling in water. Served in slices, it is garnished with butter. People of Gavar like to eat bread with almost everything, and the two traditional types of bread in Gavar are lavash and matnakash.

Kyavari Pakhlava, many-layered pastry with tissue-thin sheets of phyllo dough, filled with nuts and sugar and finished with a dousing of hot honey.

Here are some notable people who were born or raised in the town of Gavar: