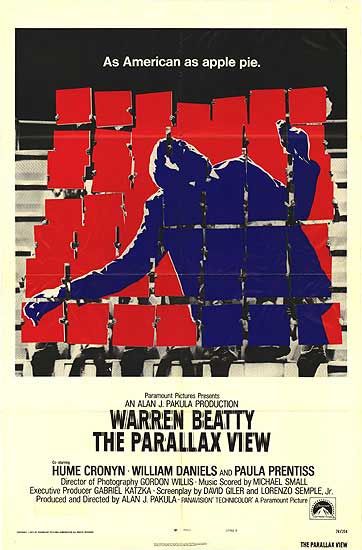 director =
producer =
music =
distributor =
released =1974 (USA)
runtime =102 min.
language =English
movie_series =
awards =
amg_id = 1:37236
budget=|:"This article is about the film, not the book by .""The Parallax View" is a 1974 movie directed by and starring (who was also a producer), adapted by , and an uncredited from the 1972 novel by . The film is a political thriller about a reporter's investigation into an obscure and murderous organization, the Parallax Corporation.

"The Parallax View" is one of a trilogy of political thrillers directed by Pakula, along with "" (1971) and "All the President's Men" (1976), and the only one not released by Pictures.

Beatty plays reporter Joe Frady, a talented crusading reporter with a reputation for drinking and "professional irresponsibility". A colleague and former lover of his, Lee Carter (), is present at the of Presidential hopeful and centrist, independent-minded Senator Charles Carroll at Seattle's . The assassin is pushed to his death just after the assassination and it is officially reported as the work of a single individual. Carter feels there is more to the killing and her idea seems justified when she tells Frady that six of the witnesses to the death also die.

Frady follows up her investigation after she herself turns up dead (ostensibly of an overdose) and he finds the conspiracy leads to the Parallax Corporation. Frady believes Parallax detects certain types of personalities and recruits them as sociopaths capable of amoral assignments, such as political assassinations. He fakes a psychological test by pretending to be a sociopath and is soon contacted by a member of the Parallax corporation, who assures him he's just the man they want to hire.

He is accepted for the Parallax therapy, leading to a sequence when Frady is bombarded with a montage of emotional images, words and music; the links between the words and images shifting as the sequence progresses and speeds up. Frady and his reactions are not shown - the montage is shown directly to the audience. Later on, he observes a member of the corporation heading to a car and driving off. Frady follows the man, who he sees pick up a bag from a trunk and check it in at an airport. Frady gets on the plane, and then realizes that a Senator is sitting in First Class and the corporation member isn't aboard. Frady then leaves a written bomb threat for the flight attendant, and the plane lands and is evacuated, just before the luggage bomb is detonated. Frady's editor is reviewing a secretly recorded tape of a conversation between Frady and the Recruiter when he gets a dinner delivery. The deliveryman is a Parallax operative and the editor soon dies after being poisoned. The tape is confiscated.

The action culminates when Frady, continuing his investigation, tails (he believes covertly) Parallax conspirators to a dress rehearsal of a rally for another politician named George Hammond. Frady hides in the rafters of the auditorium trying to secretly observe what the men, who are also walking around the rafters, are up to. Too late, Frady realizes he's been set up. Having Frady follow them to this specific location was actually what they intended all along. As Frady discovers he's trapped, the politician is shot and killed. Frady then notices a rifle that's been planted at his location. As those on the auditorium floor look up to the catwalks for the gunman, they see Frady moving about. He tries to hide and evades the initial search for him. He sees a doorway to his left filled with white light, and knows that he could be next. He makes a mad sprint for the doorway, hoping to escape, but, as he is about to reach the doorway, is killed by a silhouette wielding a shotgun.

In the final scene, the same committee who determined that the assassination of Senator Carroll was the work of just one individual announces that the assassination of George Hammond was also the work of just one individual - Joe Frady himself, who they say was obsessed with conspiracy theories involving the Carroll assassination. The committee says they hope that their findings will put an end to other such theories, that more information will be made available in the future, and that there will be no questions from the press.

The above-mentioned montage film sequence was imitated in the for the song "Pressure" and was also mimicked in The Game.

Such montages were popular in the film schools of the 1970s and can be seen in other contemporary films. Fact|date=September 2008

The distinctive photography with long lens, unconventional framing and shallow focus was supervised by .

The music video for the song "" features frontman being forced to watch scenes from this film.