Rational trigonometry is a recently introduced approach to trigonometry that eschews all transcendental functions (such as sine and cosine) and all proportional measurements of angles. In place of angles, it characterizes the separation between lines by a quantity called the "spread", which is a rational function of their slopes. In place of the classical transcendental functions, it introduces a number of "laws" between the lengths and spreads of lines bound by various geometric configurations, notably triangles.

Rational trigonometry was introduced by Prof. Norman J. Wildberger in his 2005 book Divine Proportions: Rational Trigonometry to Universal Geometry. The book is purposefully critical of traditional mathematics. One of the main claims the author makes is that the field of trigonometry is being taught and applied using choices in measurements and relations (such as angles and transcendental functions) that are arbitrarily complicated, are not necessary in order to reason about most concepts of the field, nor are they needed for most practical applications.

From there, the author rebuilds a great part of Euclidean geometry on top of his new proposed measurements, using only rational equivalences, which allow him to avoid any assumptions about the underlying scalar field. This is the Universal Geometry part of the book, where most classical findings of geometry are shown to be applicable to any field, including the field of rational numbers or finite fields.

This rationality is obtained at the expense of linearity. Unlike the traditional distance and angle units, doubling or halving a quadrance or spread does not double or halve a length or a rotation. Similarly, the sum of two lengths or rotations is not the sum of their individual quadrances or spreads.

For distinction, Wildberger refers to the traditional trigonometry as classical trigonometry. It is otherwise broadly based on Cartesian analytic geometry, with a point defined as an ordered pair (x, y) and a line as a general linear equation

The mathematics of rational trigonometry is, applications aside, a special instance of the description of geometry in terms of linear algebra (using rational methods such as dot products and quadratic forms), but students who are first learning trigonometry are often not taught about the use of linear algebra in geometry. Changing this state of affairs is a stated aim of Wildberger's book (to paraphrase his comments).

Rational trigonometry makes it possible to do trigonometry over any field, not just the field of real numbers.[2]

The quadrance is the square of the distance.[1]

Quadrance and distance are concerned with the separation of points. Quadrance differs from standard distance in that it squares the distance. Most immediately, this means that calculating the distance (or, more accurately, quadrance) between two points in 2-dimensional space is easier, as there is no need to find the square root of the sum of the squares of the differences in the x and y coordinates. 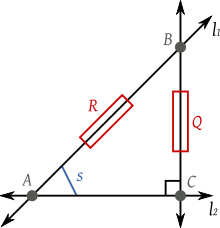 Suppose ℓ 1 and ℓ 2 intersect at the point A. Let C be the foot of the perpendicular from B to ℓ 2. Then the spread is s = Q/R. 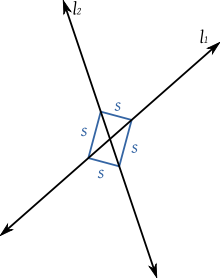 The spread of two lines can be measured in four equivalent positions.

Spread, a measure of the separation of lines, is a dimensionless number in the range [0, 1]. The value of the spread is the square of the sine of the angle.[1]

Suppose two lines, ℓ 1 and ℓ 2, intersect at the point A as shown at right. Choose a point B ≠ A on ℓ 1 and let C be the foot of the perpendicular from B to ℓ 2. Then the spread s is

The spread is the square of the sine of the angle.

Spread is not proportional to degrees or radians, and has a period of 180 degrees (π radians).

Wildberger states that there are five basic laws in rational trigonometry and these laws can be easily verified using high-school level mathematics. Some are equivalent to standard trigonometrical formulae with the variables expressed as quadrance and spread.[1]

The three points A1, A2, A3,  are collinear precisely when:

This is equivalent to using Heron's formula, the condition for collinearity being that the triangle formed by the three points has zero area.

It can either be proved by analytic geometry (the preferred means within rational trigonometry) or derived from Heron's formula, using the condition for collinearity that the triangle formed by the three points has zero area. 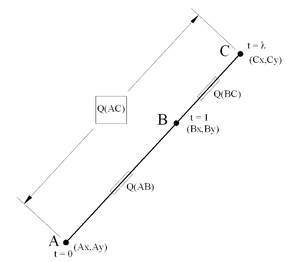 Illustration of nomenclature used in the proof.

has the general form:

where the (non-unique) parameters a, b and c, can be expressed in terms of the coordinates of points A and B as:

so that, everywhere on the line:

But the line can also be specified by two simultaneous equations in a parameter t, where t = 0 at point A and t = 1 at point B:

If the point C is collinear with points A and B, there exists some value of t (for distinct points, not equal to 0 or 1), call it λ, for which these two equations are simultaneously satisfied at the coordinates of the point C, such that:

Now, the quadrances of the three line segments are given by the squared differences of their coordinates, which can be expressed in terms of λ:

where use was made of the fact that

Substituting these quadrances into the equation to be proved:

represent distinct points, such that

is not zero, we may divide both sides by

The lines A1A3 and A2A3 are perpendicular precisely when:

This is equivalent to the Pythagorean theorem.

There are many classical proofs of Pythagoras' theorem; this one is framed in the terms of rational trigonometry.

The spread of an angle is the square of its sine. Given the triangle ABC with a spread of 1 between sides AB and AC,

where Q is the "quadrance", i.e. the square of the distance. 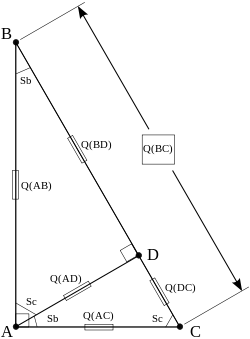 Illustration of nomenclature used in the proof.

Construct a line AD dividing the spread of 1, with the point D on line BC, and making a spread of 1 with DB and DC. The triangles ABC, DBA and DAC are similar (have the same spreads but not the same quadrances).

This leads to two equations in ratios, based on the spreads of the sides of the triangle:

For convenience, but with no loss of generality, we orient the lines intersecting with a spread of 1 to the coordinate axes, and label the dividing line with coordinates (x1,y1) and (x2,y2). Then the two spreads are given by:

Using the first two ratios from the first set of equations, this can be rewritten:

Multiplying both sides by Q(BC):

This is analogous to the law of sines.

This is analogous to the law of cosines.

This corresponds (roughly) to the angle sum formulae for sine and cosine.

Given the coordinates of two points (x1, y1) and (x2, y2), the quadrance between them is

Given two lines whose equations are a1x + b1y = constant and a2x + b2y = constant, the spread between them is

Rational trigonometry makes some problems solvable with only addition, subtraction, multiplication, and division, with fewer uses of other functions such as square roots, sine, and cosine (compared with classical trigonometry). Such algorithms execute more efficiently on most computers, for problems such as solving triangles. Other computations, such as computing the quadrance of a line segment given the quadrance of two collinear line segments which compose it do involve more computations than their classical equivalents.[3]