The National Advisory Committee for Aeronautics (NACA) was a U.S. federal agency founded on March 3, 1915 to undertake, promote, and institutionalize aeronautical research. On October 1, 1958 the agency was dissolved, and its assets and personnel transferred to the newly created National Aeronautics and Space Administration (NASA). NACA was pronounced as individual letters, rather than as an acronym.[1]

NACA research and development produced the NACA duct, a type of air intake used in modern automotive applications, the NACA cowling and several series of NACA airfoils which are still used in aircraft manufacturing. 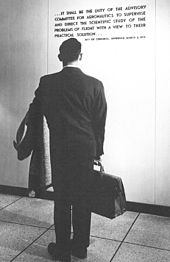 The inscription on the wall is NACA's mission statement: ...It shall be the duty of the advisory committee for aeronautics to supervise and direct the scientific study of the problems of flight with a view to their practical solution... By an Act of Congress Approved March 3, 1915

NACA began as an emergency measure during World War I to promote industry/academic/government coordination on war-related projects. It was modeled on similar national agencies found in Europe. Such agencies were the French “L’Etablissement Central de l’Aérostation Militaire” in Meudon (now Office National d'Etudes et de Recherches Aerospatiales), the German “Aerodynamical Laboratory of the University of Göttingen” and the Russian “Aerodynamic Institute of Koutchino”. However, the most influential agency upon which the NACA was based was the British “Advisory Committee for Aeronautics”.

In December 1912, President William Howard Taft had appointed a National Aerodynamical Laboratory Commission chaired by Robert S. Woodward, president of the Carnegie Institution of Washington. Legislation was introduced in both houses of Congress early in January 1913 to approve the commission, but when it came to a vote, the legislation was defeated.

Charles D. Walcott – secretary of the Smithsonian Institution from 1907 to 1927 – took up the effort, and in January 1915, Senator Benjamin R. Tillman, and House Representative Ernest W. Roberts, introduced identical resolutions recommending the creation of an advisory committee as outlined by Walcott. The purpose of the committee was "to supervise and direct the scientific study of the problems of flight with a view to their practical solution, and to determine the problems which should be experimentally attacked and to discuss their solution and their application to practical questions." Assistant Secretary of the Navy Franklin D. Roosevelt wrote that he "heartily [endorsed] the principle" on which the legislation was based. Walcott then suggested the tactic of adding the resolution to the Naval Appropriations Bill.[2]

According to one source, "The enabling legislation for the NACA slipped through almost unnoticed as a rider attached to the Naval Appropriation Bill, on 3 March 1915."[3] The committee of 12 people, all unpaid, were allocated a budget of $5,000 per year.

President Woodrow Wilson signed it into law the same day, thus formally creating the Advisory Committee for Aeronautics, as it was called in the legislation, on the last day of the 63rd Congress.

The act of Congress creating NACA, approved March 3, 1915, reads, "...It shall be the duty of the advisory committee for aeronautics to supervise and direct the scientific study of the problems of flight with a view to their practical solution...."[4] 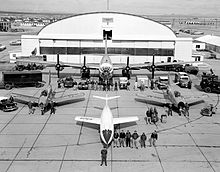 The NACA Test Force at the High-Speed Flight Station in Edwards, California. The white aircraft in the foreground is a Douglas Skyrocket. 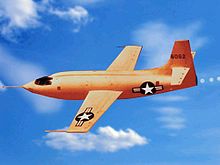 On January 29, 1920, President Wilson appointed pioneering flier and aviation engineer Orville Wright to NACA's board. By the early 1920s, it had adopted a new and more ambitious mission: to promote military and civilian aviation through applied research that looked beyond current needs. NACA researchers pursued this mission through the agency's impressive collection of in-house wind tunnels, engine test stands, and flight test facilities. Commercial and military clients were also permitted to use NACA facilities on a contract basis.

In 1922, NACA had 100 employees. By 1938, it had 426. In addition to formal assignments, staff were encouraged to pursue unauthorized "bootleg" research, provided that it was not too exotic. The result was a long string of fundamental breakthroughs, including "NACA engine cowl" (1930s), the "NACA airfoil" series (1940s), and the "area rule" for supersonic aircraft (1950s). On the other hand, NACA's 1941 refusal to increase airspeed in their wind tunnels set Lockheed back a year in their quest to solve the problem of compressibility in the P-38. 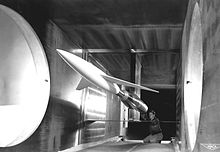 An engineer makes final calibrations to a model mounted in the 6x6 foot Supersonic Wind Tunnel at the laboratory.

NACA claims credit for having the first aircraft to break the sound barrier (although the aircraft, the Bell X-1, was controlled by the Air Force and flew with an Air Force pilot when it broke the sound barrier). They also claim credit for the first aircraft (X-15) that eventually flew to the "edge of space". NACA airfoils are still used on modern aircraft, up to the state of the art F-22 Raptor jet fighter.

In 1951, Richard Whitcomb determined the transonic area rule that explained the physical rationale for transonic flow over an aircraft. This concept is now used in designing all transonic and supersonic aircraft. 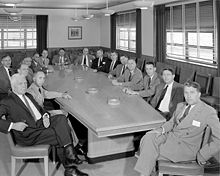 On 21 November 1957, Hugh Dryden, NACA’s director, established the Special Committee on Space Technology.[9] The committee, also called the Stever Committee after its chairman, Guyford Stever, was a special steering committee that was formed with the mandate to coordinate various branches of the Federal government, private companies as well as universities within the United States with NACA's objectives and also harness their expertise in order to develop a space program.[10]

Remarkably, Hendrik Wade Bode, the man who helped develop automatic radar-controlled artillery that brought down the Nazi V-1 flying bombs over London during World War II, was actually serving in the same committee and sitting at the same table as Wernher von Braun who was head of the team which developed the V-2, the other weapon that terrorized London.[11][12]

On January 14, 1958, Dryden published "A National Research Program for Space Technology," which stated:[9]

On March 5, 1958, James Killian, who chaired the President's Science Advisory Committee, wrote a memorandum to the President Dwight D. Eisenhower. Titled, "Organization for Civil Space Programs," it encouraged the President to sanction the creation of NASA. He wrote that a civil space program should be based on a "strengthened and redesignated" NACA, indicating that NACA was a "going Federal research agency" with 7,500 employees and $300 million worth of facilities, which could expand its research program "with a minimum of delay."[9]

With the creation of NASA in 1958, the NACA was abolished, and its research centers – Ames Research Center, Lewis Research Center, and Langley Aeronautical Laboratory – were incorporated within the new space and aeronautics agency along with some elements of the U.S. Army and U.S. Navy. In 1967, Congress directed NASA to form an Aerospace Safety Advisory Panel (ASAP) to advise the NASA Administrator on safety issues and hazards in NASA's aerospace programs. In addition, there were the Space Program Advisory Council and the Research and Technology Advisory Council.

In 1977, these were all combined to form the NASA Advisory Council (NAC) which is the successor to the National Advisory Committee for Aeronautics.[13]

NACA's first Wind tunnel was formally dedicated at Langley on June 11, 1920. It was the first of many now-famous NACA and NASA wind tunnels. Although this specific wind tunnel was not unique or advanced, it enabled NACA engineers and scientists to develop and test new and advanced concepts in aerodynamics and to improve future wind tunnel design.

As of their meeting on 26 May 1958, committee members, starting clockwise from the left of the above picture:[10]