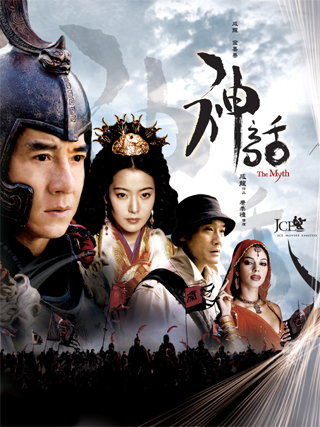 General Meng Yi is tasked with escorting the Korean Princess Ok-Soo from her homeland of Korea to China, where she will become a concubine of the Qin Emperor. On their journey from Korea, she falls into constant dangers, especially from a Korean general who wants both to save her from being a concubine and to marry her. Each time, she is rescued from the general by Meng Yi. Eventually, the two fall in love. However Meng Yi hides his feelings since he owes his allegiance to the Qin Emperor and Ok-Soo was supposed to be the Emperor's concubine. Ok-Soo has no such dilemma and openly displays her feelings for Meng Yi.

Later, the Qin Emperor becomes very ill, but succeeds in finding the immortality elixir. But the guards escorting the elixir are ambushed by rebels. Meng Yi pursues the rebels with his troops and wages a fierce battle. He doesn't know that a conspiracy has already been hatched by the prince and prime minister, followed by a coup d'état burying the emperor alive. Although slain in battle, Meng Yi manages to hand over the elixir to his deputy, Nangong Yan. Sadly, Nangong Yan and Ok-Soo are accused as rebels by the conspirators. As punishment, they are forced to drink the immortality elixir and are then thrown into the great , to live imprisoned forever. The Emperor who wanted to live could not live, and Ok-Soo who wanted to die could never die.

Jack is the reincarnation of Meng Yi and works as a modern day archaeologist. He often dreams himself as a general, rescuing a far-away princess from danger. One day, William (), a friend of his who works for a secret foundation, asks him to find a rare material as a favor. This rare material has the ability to make a field of zero gravity. His travels take him to the floating tomb of a Dassar King in , where he finds a sword related to his past life. Apparently, in the past life, Jack as Meng Yi fought a Dassar King over the emperor's concubine Ok-Soo. To honor this fight, the two warriors agree to exchange their swords. The sword Jack finds floating beside the floating coffin of the Dassar King is indeed that of Meng Yi. Jack's friend, William causes some trouble in the tomb by removing a piece of rare material from a statue. This action causes the zero gravity field inside the tomb to collapse, bringing down the floating coffin and sword. When the coffin smashes to the ground, its lid opens and a painting of Ok-Soo is revealed, attached to the lid of the coffin.

Jack is then chased by the sect members and the police. After being left by William, who flees in a helicopter, Jack jumps over a high cliff into a river. He loses consciousness and drifts along the stream until an Indian princess, Samantha () rescues him.

Samantha takes him to her uncle, a teacher of (), who enlightens him about his past and future. During a sword match with a local warrior, Jack has a vision of the past match between Meng Yi and the Dassar King.

After saving Jack from the police, Samantha helps him escape back to his home. At home, Jack delivers the sword to China National Museum, as a National Treasure. This angers the leader of secret organization that has been funding Jack and William's adventure in search of the anti-gravitational material.

After extensive research, it is determined that the anti-gravitational material is actually fragments of a that fell to Earth in the time of the Qin Dynasty. Jack and William also discover the exact location of the legendary emperor's tomb, which is hidden behind a great waterfall. This massive tomb is believed to contain the largest fragment of the meteorite, the power of which is great enough to enable the ancient Chinese to build a floating palace, intended to be the imperial palace for the Qin emperor in his afterlife.

Using state-of-the-art equipment, Jack is able to reach the location of the emperor's tomb, where he meets Ok-Soo and Nangong Yan. The two immortals believe that Jack is Meng Yi and greet him.

At the same time, the party of intruders led by the leader of the secret organization -- who, years ago, had been Jack's professor and is now his main rival -- enters the tomb. He insists that Ok-Soo relinquish the immortality pill. Yan refuses the demand by stating that nothing will be taken away from the emperor's tomb. A large aerial fight begins, raging between the two parties.

William, trying to collect a sample of the meteorite, pulls out a piece from a statue. His actions break the balance of the zero-gravity field and the emperor's tomb collapses in on itself.

As he heads for the exit of the main chamber, Jack asks Ok-Soo to come with him. Ok-Soo refuses his offer since, having heard William call his true name, she now knows that Jack is not Meng Yi. She then flies back to the crumbling castle, where she holds her promise to await the return of the real Meng Yi. She does not know that Jack is actually the reincarnation of Meng Yi.

Just as the villain approaches the fortress to retrieve the pill, Nangong grabs the leader from under the steps as the staircase collapsed. In the end, they both perish.

William, who was trapped under a statue hurled at him during the fight, begins to drown in the flooding hole of mercury. Jack promises that their friendship is forever before William drowns within the mercury, paying the ultimate price for his previous habits in graverobbing.

At the last moment, Jack escapes through the closing gate, forever leaving his past life. Back at his houseboat, it is revealed that Jack wrote a book out of his experience, which he dedicates to William.

Styna Chyn, from filmtreat wrote a positive review of the film :

"Even though Jackie Chan did not direct “The Myth,” (Stanley Tong), he did produce it; and his creative input echoes throughout this genre-bending action film. Shot in China, Hong Kong, and Hampi ,India, “The Myth” is a comedy of epic proportions. Combining historical fantasy, martial arts, and science-fiction, Tong’s film follows archaeologist Jack (Jackie Chan) and scientist William (Tony Leung Ka-Fai) on their adventures in investigating the veracity of a myth involving immortality, levitation, and a Korean princess-turned-concubine for Emperor Qin towards the end of the Qin Dynasty." [http://www.filmthreat.com/index.php?section=reviews&Id=8206]

David Cornelius, from efilmcritic gave the film 4 out of 5 stars and wrote a positive review :

"Once again, it’s time to lament that while Jackie Chan has spent the past few years churning out mostly mediocre-or-worse flops like “Around the World in 80 Days” or those damn “Rush Hour” sequels in Hollywood, he’s also spent the same time flying back home every now and then to make some darn-good-or-better flicks that, sadly, remain mostly unseen Stateside because they’ve been unceremoniously dumped onto DVD by the studios that pick up the rights to them but then never really bother to do anything about it." [http://www.efilmcritic.com/review.php?movie=11651&reviewer=392]

Jim Hemphill, from Reel Films Reviews gave the film 4 out of 5 stars and wrote a positive review :

"Jackie Chan's The Myth is enjoyable but second-rate Jackie Chan, an action film that's completely satisfying on every level except when compared to the star's own best work. Chan has, in some ways, become a victim of his own excellence: the astonishing stunt work and action choreography of his peak years (the 1980s period of the Police Story and Project A films) have set up expectations that no performer could continue to live up to, certainly not after moving into middle age. Viewers weaned on Chan's classics will undoubtedly find The Myth to be Jackie-lite, a slightly slowed-down version of his usual acrobatics. Yet the film does contain a few superb set pieces reminiscent of vintage Chan, and director Stanley Tong's opulent visual style makes it a feast for the eyes—and the bottom line is that half-speed Jackie Chan is still more dynamic than just about any other action hero." [http://www.reel.com/movie.asp?MID=147166&buy=closed&PID=10134849&Tab=reviews&CID=18#tabs]

In "", Robert Koehler wrote a generally negative review of the film:

"Resembling a story session where many ideas are brainstormed and few stick, "The Myth" messily reps in epic mode as a contempo archaeologist drawn into a plot to plunder the treasure of the Qin Dynasty's first emperor. As part of a movement in H.K. cinema to return to the ambitious movies of yore, helmer Stanley Tong's multi-period adventure flirts with considerable entertainment on one hand and near self-destruction on the other. Whether Chan's star power will pull in enough international bizbiz is doubtful, though ancillary should flex muscles in most territories." [http://www.variety.com/review/VE1117928270?categoryId=31&cs=1]

"That "The Myth" eventually turns into an almost interminable experience is a shame, given the light-hearted and genuinely entertaining vibe of the film's opening hour...Fortunately, "The Myth" contains several expectedly impressive action sequences - with a fight set within a rat paper factory an obvious highlight - although it's not long before such moments wear out their welcome. This is particularly true of an unbelievably tedious plot development towards the end, which finds all of the film's central characters forced to duke it out inside some kind of an infinite, gravity-defying mausoleum (!) Chan is reportedly looking to get away from some of the sillier films he's been churning out as of late, but "The Myth" certainly does not mark a step in the right direction" [http://www.reelfilm.com/tiff0508.htm#myth]

"The Myth" was released in on September 23, 2005, and earned a strong HK $6,230,000 in its first three days. It ended its run with HK $17 million, making it the third highest-grossing domestic release in Hong Kong that year.

* has commented that this movie accurately describes the past life experience. Here he describes it: http://www.youtube.com/watch?v=LxXvP2bF71w